Romanski projected to have a big season 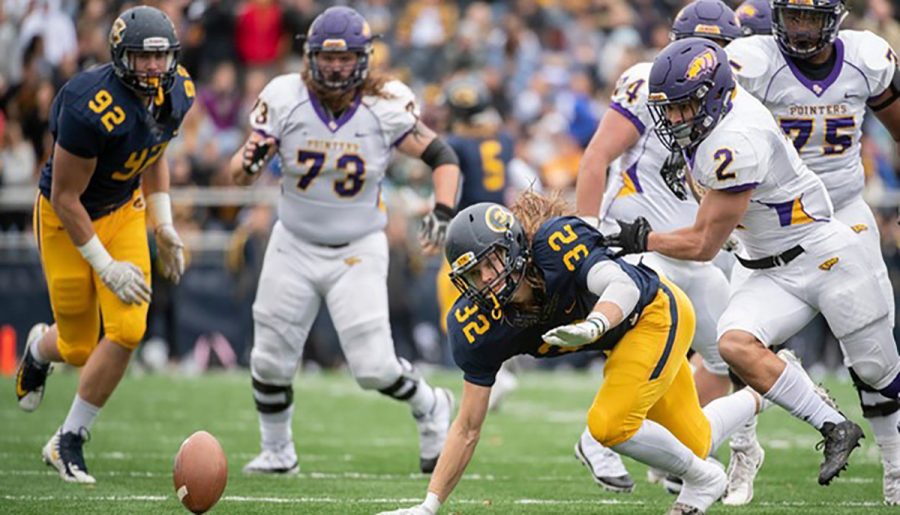 Romanski earned second-team honors last season after leading the Blugolds with 59 tackles and 14.5 sacks that led the conference.

When the Blugolds take the field for the first time this Saturday, Sam Romanski, a fifth-year student, said he is looking to make a big impact this season after coming off a historic season last year.

Romanski graduated from Wausau East High School in 2015 and is pursuing a double major in kinesiology movement studies and businesses administration at UW-Eau Claire.

In talking with Romanski, he is very excited to get back on the field.

“I’m really hyped for the season to start,” Romanski said. “I’m really enjoying hanging out with my teammates in my final year.”

“It’s been a long road,” Romanski said. “The grind has been tough, but I wouldn’t have it any other way.”

“Sam, when he first came in, wasn’t nearly the player he is now,” Ebner said. “He had a lot to work on and was just one of the guys. I honestly didn’t think he was going to be an All-American.”

Ebner has been coaching for 10 years and said he has been around other athletes who have gone on to become All-Americans. But Romanski is the first player of his that he has molded into the player he is today and was awarded handsomely.

“It’s really cool to be recognized,” Romanski said, “but I try not to think about it. That was last year, this is a new season. The projection is cool, but I know the team and myself have a lot to work on.”

When it comes to his expectations for the season, Romanski said he wants to improve every week, see progress and to win games. Four wins are more than the last two seasons combined.

“I expect Romanski to have a big year,” Ebner said. “Maybe not numbers-wise. (It) will be hard because when teams are preparing for us, they’ll scheme up and try to slow him down, but I still expect him to have a big impact and still get to the quarterback.”

Romanski said he knows teams will try to stop him, but he still expects to have a big year. He said he believes his ability to rush the passer is his greatest strength.

Coach Ebner talked about how Romanski is a student of the game and is always looking for something to improve. Whether it be his footwork or watching the film, he is always working to better his game.

Romanski is noted as one of the best small school prospects in the country, according to NFL Draft Diamonds.

Ebner said Romanski as a teammate is, “a good one.”

“He wants to become a trainer, so he has been a huge leader in the weight room as far as getting guys in there and lifting and lifting correctly,” Ebner said. “Our guys really look up to him and he was just named team captain this past Sunday by the team. I’m excited to see what kind of season he has this year,” Ebner said, “He’s a good guy to have around.”

The Blugolds start the season this Saturday at home against Loras (Iowa). Kickoff is at 1:10 pm. Fans can follow along with live video, audio and stats at Blugolds.com.