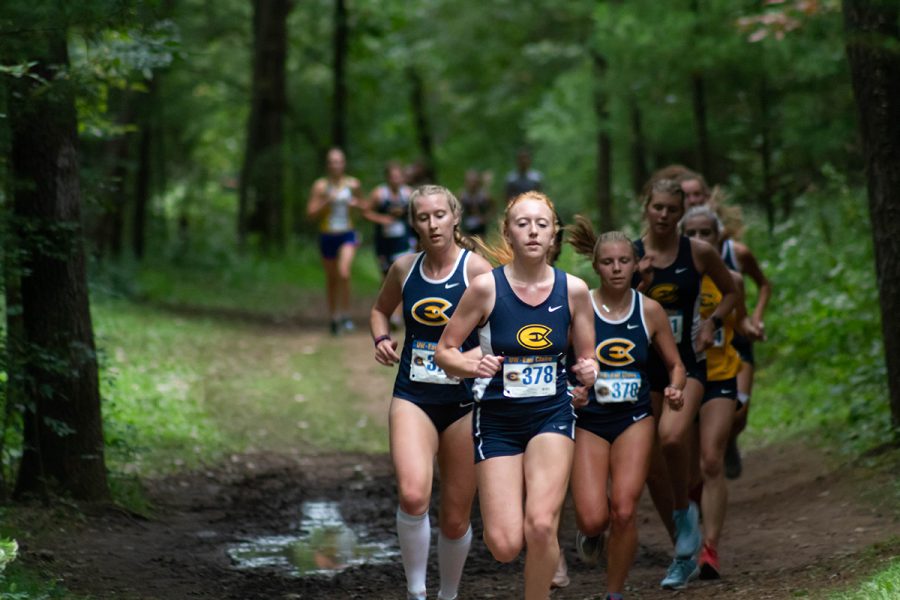 Runners avoided a large mud pit on the course.

The 2019 cross country season officially started this past Saturday, Sept. 7 at City Wells where both the men’s and women’s team ran against the Blugold alumni.

The meet started at 6 p.m. with the no. 4 Blugolds lined up against the alumni. Only six alumni ran and completed the race.

Blugold alum, Mary Wirtz, finished fourth overall. After finishing the race, she wrapped her arms around her newborn.

Wirtz graduated from UW- Eau Claire in 2009 and is a multiple-time All-American with top finishes in cross country, as well as the 5k indoors and distance medley relay.

One of the major stories of the meet was that Wirtz recently had a child two and a half weeks before the meet.

During the pregnancy, Wirtz said she continued to train. She completed a full marathon at six months pregnant and qualified for the Boston Marathon.

“I was very fortunate to be able to run during my pregnancy,” Wirtz said. “I’m not sure how I did it.”

Lexi Tremble, a fifth-year student, won the 5k race with a personal record time of 18:49. The next Blugold across the line was Emma Drangstve, a third year student, who placed fifth overall.

Tremble, Drangstveit, Cisewski and Naomi Long, a second-year student, are all returning from last year’s nationals team where they placed fourth. Long didn’t run at alumni as a healthy scratch.

The men’s race began at 6:45 p.m. with the no. 34 Blugolds taking on the alumni. Forty-six runners finished the race as UW-Eau Claire alumni scored a perfect 15 points to win the meet. The Blugolds scored 43 points.

Alumni Christian Leithner won the race in a time of 20:26. The first Blugold across the line was Brett Haffner, a second-year student, in sixth place.

The next Blugold to finish was Tyler Osen, a first-year student. Connor Dolan and Jake Petri, both third-year students, rounded out the top four for the Blugolds.

“My main expectation is for the team to be positive, support one another and focus on process objectives,” Dan Schwamberger, head coach of the team, said. “Also, making sure academics is our top priority because, historically, our best runners have also been our best students.”

Schwamberger is looking for fourth-year Bailey Wilson and third-year Liz Galloway to have surprise seasons. According to Schwamberger, they both had consistent summers and it’s showing in practice.

Schwamberger also talked about what alumni weekend meant to him. He said it’s extremely fun for him as a coach to see all the alums who helped build the program up to what it is today.

Schwamberger said the relationships between the alumni and current runners are important to him and he hopes he has done a good job at extending those relationships.

“The foundation of our program is built on a positive team environment where everyone is respected” Schwamberger said. “A strong work ethic with an emphasis on training smart, enjoying the competition and having fun are the key components of our training philosophy.”