Building community and looking ahead

After a successful 2018 season, Blugolds volleyball is excited for what awaits in 2019 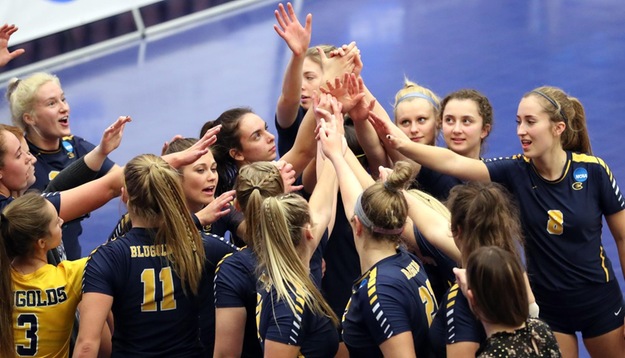 After a successful 2018 season that took them to the final four of the NCAA tournament and left them WIAC conference champs, the UW-Eau Claire women’s volleyball team is starting their 2019 season with large goals in mind, said coach Kim Wudi.

“I’m kind of doing whatever it takes to establish ourselves among the top teams in the whole country,” Wudi said.

Already ranked as No. 4 in the first two AVCA Division III coaches preseason polls, the team attributes their past success to not only their hard work ethics in terms of training, but also to the type of community they hold.

Kenzie Bachmann, a third-year outside hitter and team captain, said she believes the strength of community the team help last year played a large role in fostering their success within the season.

“We really like had a love for one another that was really strong and pell performance on and off the court all the time,” Bachmann said. “It was like we all always wanted to play for each other, not just for ourselves. And I think that’s why we ended up being so great.”

One challenge the team has come across so far this season is recovering its sense of leadership, Bachmann said. This season 6 new players joined the team, and they are playing without any senior members.

“We’re really trying to come together to inspire the younger kids, our younger teammates, to just motivate them, like those seniors motivated us,” Bachmann said.

To bring the team together, Wudi said she typically tries to travel during their first weekend. This year the team played in the Christopher Newport Tourney in Virginia, where they won their first two matches but fell to No. 3 ranked Juniata College.

“That helps us really kind of mold our team and get to know everybody really quickly,” Wudi said. “And it’s interesting just how fast they do get to know each other, you know, when they’re together all the time.”

So far in the season, the team has worked on figuring out which positions to place each player that will create the strongest team lineup, said Wudi. This is something that continues to evolve as players’ different strengths are shown.

As they practice, Taylor Scalia, a third-year libero, said they try to work towards not only tangible goals, like winning the WIAC conference and participating in the NCAA tournament, but also towards instilling a championship culture within the team.

“But then we also have goals within our team, just like in building a culture, a championship culture, and building a sense of pride,” Scalia said. “And selflessness and dedication and commitment, as well, things like that.”

Bachmann uses previous seasons’ captains as examples for her leadership on the team, she said, and continues to work towards keeping the team motivated despite some recent losses. After the team truly comes together, she said she is excited to see the peak of their performance.

Reflecting on her past few years of experience on the team, Scalia said she would have never imagined the community and culture of Blugold athletics as a freshman.

“The passion the coaches and the players have and watching people who aren’t captains just lead and be selfless and commit themselves to everybody is just really inspirational,” Scalia said. “Being a part of something bigger than yourself is just really amazing.”

The volleyball team will be hosting the 7th annual Sandy Schumacher Memorial Tournament, which honors Sandy Schumacher, one of the founding members of the Wisconsin Women’s Intercollegiate Athletic Conference and a pioneer in Blugold women’s athletic programs, this weekend inside McPhee. Further details can be found on the volleyball team’s website.