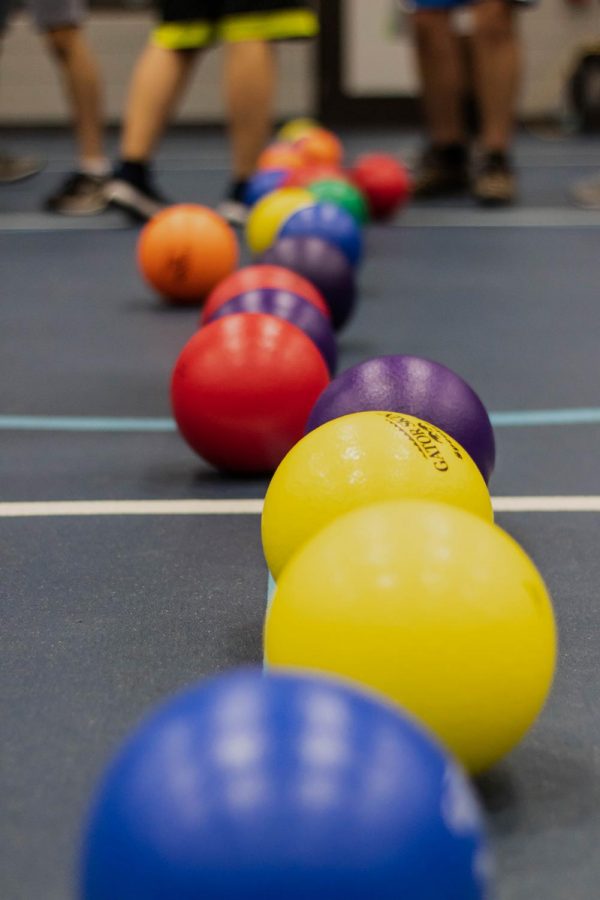 Dodgeballs are returned to the center line after each round.

UW-Eau Claire’s very own dodgeball club has seen a surge of new members this fall. Whether or not there is an abundance of Vince Vaughn’s “Dodgeball” quotes remains to be seen. However, one thing is certain: no wrenches are thrown during practice.

Dodgeball was first introduced to UW-Eau Claire as an intramural sport in 2004, and has since transformed into a club sport. Because it is a club sport, there are no membership fees, and anyone who has interest in it can join.

Cullin Peterson, a second-year education student and president of the dodgeball club, said he joined his freshman year because he never really got to play dodgeball in high school and that the club’s low commitment drew him in.

The dodgeball club, which meets on Wednesday and Sunday nights from 8 to 10 p.m. in the Ade Olson blue gym #6 located on the lower floor of McPhee, does not require that members show up to all meetings or stay the entire length. Participants also do not have to be a member to play. Peterson invites anyone who is interested to hop in a game and try it, he said.

The competitiveness of the team varies, Jacob Golat, a first-year undecided student, said.

“I wouldn’t say it’s too competitive,” Golat said. “A lot of people just come and have fun. There are some competitive people — some people I heard played with some of the national guys.”

Overall, Golat said he thinks most people attend just to have fun.

For members looking for more of a challenge, the club is looking into not only setting up more tournaments on campus, but they also travel to national tournaments in Wisconsin, Illinois and Minnesota, said Casey Sroda, a second-year physics major and treasurer of the dodgeball club. Usually, players are scattered into random teams amongst other participants and follow a stricter set of rules, Sroda said.

“(Last year,) there was a team that was a majority of UWEC students that made it to the grand finals,” said Sroda.

For less competitive students, dodgeball club is a good place to distract yourself from the stress of schoolwork and to meet new people, said Bri Baumeister, an undecided first-year student.

One thing the club hopes to improve on this year is average attendance to each event and total membership.

Peterson said attendance varies from week to week, and the club remains in a rebuilding period. This year, none of the executive board members from the 2018-19 year returned, leaving the mantle to be held up by five new board members who are all currently sophomores.

“We are basically almost starting from nothing except the club itself,” Peterson said.

Although the club is still growing, Peterson said that so far, they seem to be doing very well.