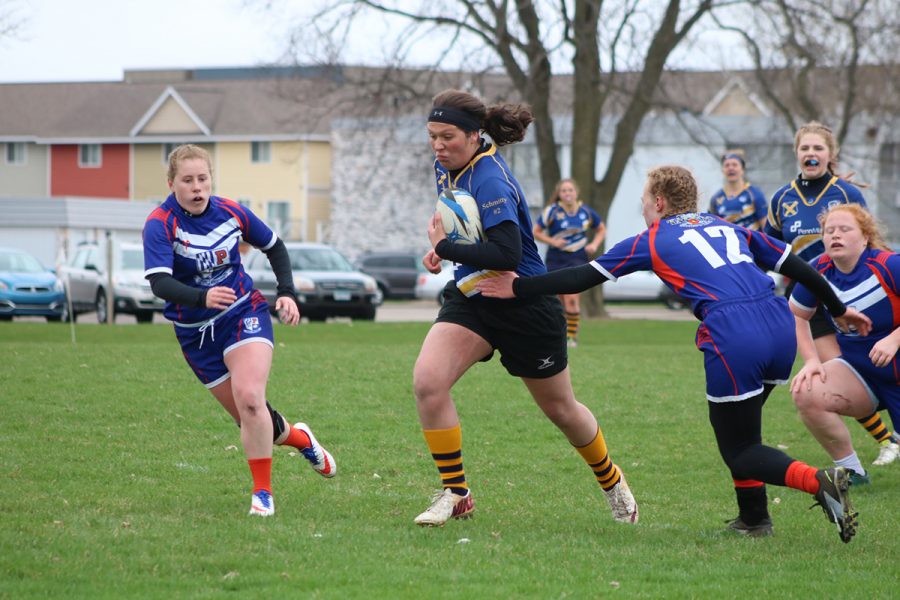 The Eau Claire Navy team competes in a match against UW-Platteville in 2019.

The UW-Eau Claire women’s club rugby team hosted and won their annual Iron Woman tournament this Saturday. With hot dogs and hamburgers cooking on the grill and a raffle held beneath a nearby tent, nine teams from seven different universities came to Eau Claire ready to play, despite the cooler temperatures.

In the months before this tournament, the Blugolds have found an ample amount of success throughout both the fall and spring seasons. Blugold rugby coach Derek Wagner, who originally played the sport at UW-Stevens Point, said he was proud of what the team has been able to accomplish this year.

f fifteen teams, so that was a great season even though we ended up losing in the finals, and we’ve been doing really well this spring too,” Wagner said. “We took third place in our first tournament and then we took first in our next one, and now we’re working on this one today.”

By noon, one of Eau Claire’s rugby teams had advanced to the qu

arterfinals and another had advanced to the semifinals. Wagner explained how common it was to have two teams in this type of tournament.

“Today we brought sixteen people for a sevens team, which consist of seven players on the field and about five subs, so a full size is about twelve,” Wagner said. “We’re hosting too, so we have more people, so it’s common to have two teams in the tournament.”

As the day progressed, UW-Eau Claire made it to the finals, where the team defeated UW-Oshkosh to take home first place on its own field.

Underneath the nearby tent, volunteers Tammy Bauer and Hunter Foster worked to promote the raffle, which was held to help raise funds for the club team. Though Forster said the raffle ticket selling had been a bit slow throughout the day, Bauer talked about the importance of having these kinds of events to raise money.

“Because it’s a club sport, the team doesn’t get much funding from the school, so they raise a lot of money with events like these,” Bauer said.

Despite the challenges in raising funds, third-year Michaella Burg, who has been playing on the Blugold rugby team since the fall of her freshman year, said she enjoys the relaxed atmosphere of the club sport.

“If it became a university sport, it would be harder for people to just show up to play,” Burg said. “When I came freshman year, I barely even knew the sport,”

Though she may not have known much about the sport right away, Burg said it’s really the relationships they form throughout the season that are important.

“I like the community,” Burg said. “Here you actually hang out with the teams afterwards. We know so many other people, and we’re all so supportive of one another, and it’s just fun to join.”

The Blugold women’s rugby team looks to continue their successful streak next Saturday, May 4 in the UW-Oshkosh tournament.