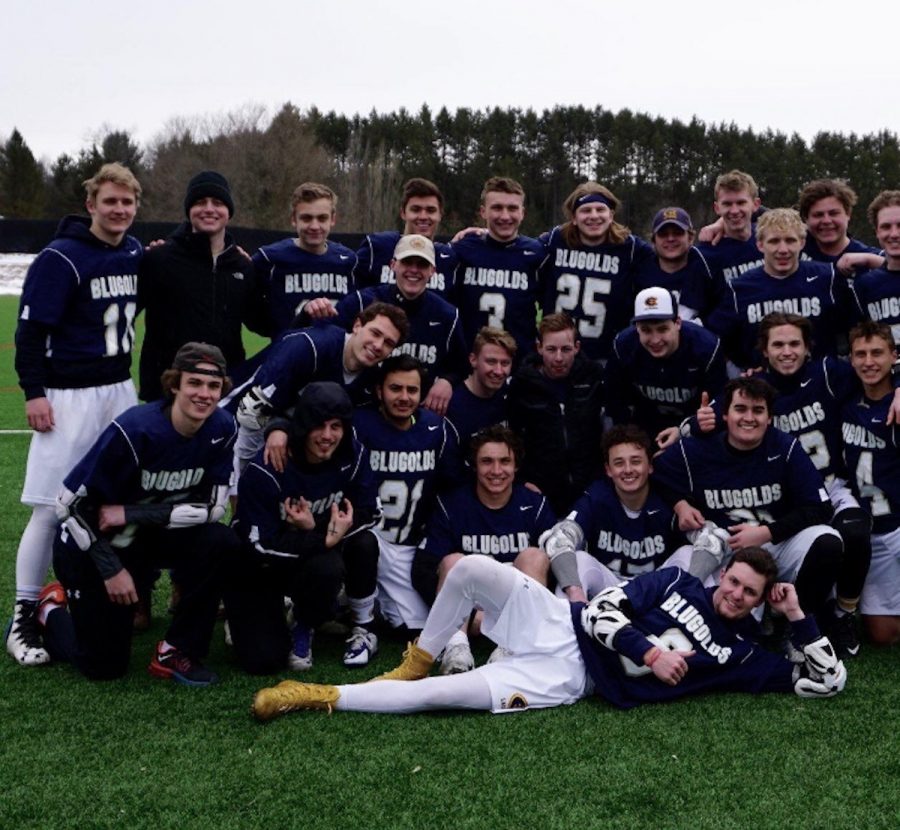 The men's lacrosse team benefited from the number of first-years who joined.

The UW-Eau Claire Men’s lacrosse team finished their spring season on a high note with a third-place finish in the UW-Madison tournament last weekend.

“We had a little bit of a rough start to the season,” Brennan Davison, a second-year athlete, said. “We lost a couple games in the beginning but we ended the season on a really high note.”

Davidson said this is one of the best statistical seasons the team has seen since the club started.

UW-Eau Claire started off the Madison tournament with a dominant win over the University of North Dakota while barely scraping by UW-Madison in the next round. In the semifinals, UW-Eau Claire met UW-La Crosse and lost a close game that sent them to the consolation finals, where they played UW-Madison for the second time with the same result.

“We wanted to end the season on a high note for the seniors,” Carter Morrissette, a first-year athlete, said. “We also wanted to carry over some momentum for next season.”

“We had some games canceled because of the snow,” Davison said. “The roads were just too bad to drive to the games.”

Snow and cold weather also played a factor in where the team held their practices. Because of the large amount of snow, they had to conduct most practices inside Zorn Arena, Davison said.

“When we practice in Zorn, it’s hard to get that real game feel,” Davison said. “It’s a lot better for the team when we can practice outside.”

The team also faces fluctuating numbers because of their status as a club team. Fortunately for them, the team gained a slew of talented first-years in the offseason.

“We had about six or seven freshmen this year and they got a lot of playing time,” Davison said. “They were a big help to the team.”

One of these contributing first-years was Morrissette, who played at the attack position and scored 14 goals this season.

“Carter brought a lot of enthusiasm and excitement to the team and he was a big help on offense,” Davison said.

This enthusiasm and excitement is a pivotal part in winning games at the club level, Morrissette said.

“The whole point of playing is having fun,”  Morrissette said. “Even though we aren’t a division-three sport, we take it really seriously and that’s why we can win a lot.”

First-years had to acclimate to limited and sporadic practices times and the physicality of playing against older players, Morrissette said.

“It was definitely new to me not having a coach and set practices times,” Morrissette said. “I had to adapt to having some late-night practices and playing against 22-year-old men.

Despite being a mid-sized school, UW-Eau Claire is competitive against schools such as UW-Madison and the University of North Dakota, schools that are much larger in size and student population.

“We go against a lot of bigger schools like Madison,” Davison said. “It’s definitely a little harder playing schools like that because they have a much larger selection of players.”

The reason UW-Eau Claire is competitive against these larger schools is because of the intensity and efficiency that they practice with, Davison said.

“We have two captains and they are basically our coaches,” Davison said. “They do a really good job of setting up practices and helping us stay focused.”

Another reason why the men’s lacrosse team has been successful on the field is because of the friendships the team has developed off of it, Morrissette said.

“We all became really good friends over the course of the year, and that helps our chemistry on the field,” Morrissette said. “That chemistry definitely helps us be successful.”

Although the men’s lacrosse team finished this season with one of the best records in recent memory, the team is already looking forward to next season, where they believe they can be even better.

“The way the year ended is kind of a lead-in to next season,” Davison said. “Next year we have the capability to have our best season yet.”

Alex can be reached at [email protected].