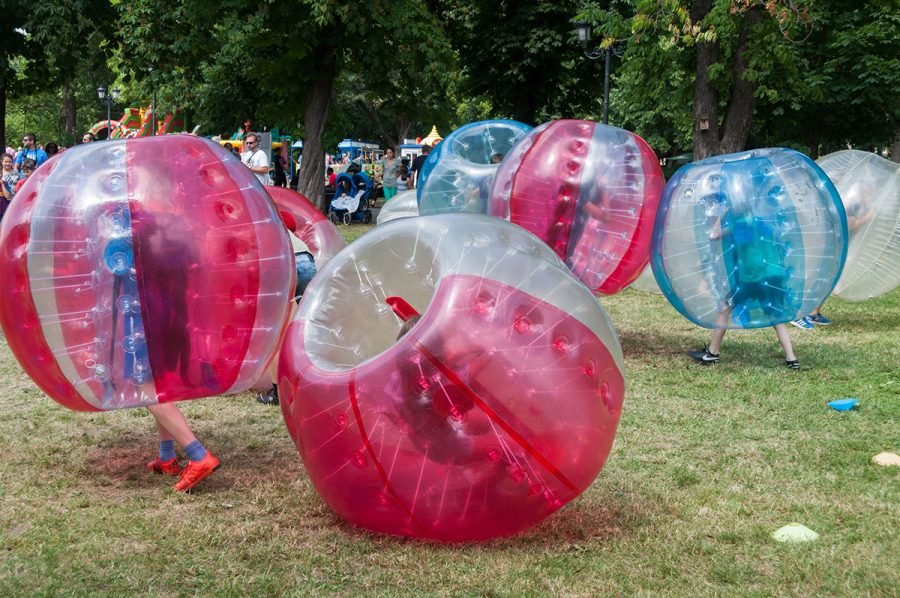 The UW-Eau Claire College of Business Student Advisory Council is hosting a bubble soccer charity and bonding event on Friday, May 4 in Towers field on upper campus.

Soccer: A sport that generally involves no hands and a ball being kicked around until it makes it into a goal. Take this, but with the players in giant bubble-like objects.

The UW-Eau Claire College of Business Student Advisory Council is hosting a bubble soccer charity and bonding event on Saturday, May 4 in Towers field on upper campus.

Wyatt Haas, a fourth-year finance and economics student, said bubble soccer is very similar to regular soccer, but the players wear giant blow-up bubbles around them to use to collide with opposing players.

“It’s a little more of a contact sport than normal soccer,” Haas said. “But since the players will be wearing the bubbles, they will be much more safe.”

Haas also said soccer has been a popular sport in the area recently, especially at large events.

The event is an effort to challenge colleges within UW-Eau Claire to compete against each other and promote some cross collaboration and fun between all disciplines, as well as a charity event, Haas said.

“We were thinking of ways to cultivate interaction between students,” Johnson said. “From all of the colleges at UW-Eau Claire in a casual and fun environment.”

He said he feels there is a separation socially between each college at UW-Eau Claire, so he hopes by putting on this event, they can start to connect large amounts of students across every discipline, while also having a fun competition.

“One of the College of Business Student Advisory Council’s many initiatives is to bring students from all disciplines together,” Johnson said. “To collaborate and form long lasting relationships.”

Johnson said they’re looking for three teams from each college, with a minimum of four people per team.

Johnson said he believes a student’s experience at college is improved through connecting with new people and by having a sense of belonging.

“I’m excited to see some real pride from each college,” Haas said. “I’d love to see every team really trying their hardest to represent their college.”

All of the proceeds made from the bubble soccer event will go to the Make a Wish Foundation, Haas said.

“We’re excited to see students interacting and having fun together,” Johnson said.