UW-Eau Claire powerlifting club made its way to collegiate nationals 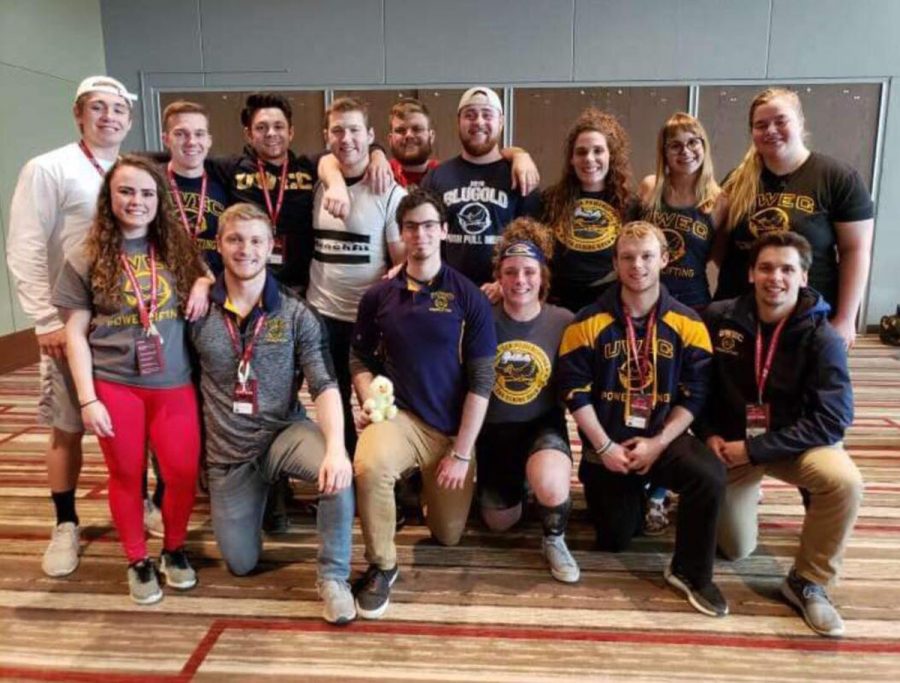 The UW-Eau Claire Powerlifting Club competed in deadlifts, squats and bench press to make their way to collegiate nationals for the second year in a row.

The powerlifting club is a sports club at UW-Eau Claire that competes in U.S.A powerlifting — a national organization — sanction events, Sam Kroll, a third-year integrated strategic communications student, said. She said the club made its first appearance in Spring 2017 as a new addition to UW-Eau Claire sports clubs.

Kroll said anyone can join the team — from people who have done powerlifting in high school to those who haven’t stepped foot in a gym before.

“When I first started,” Kroll said, “I couldn’t even squat the bar. It’s more technique and form than anything. We have a good support system of people that know what they’re doing.”

Kroll said the team went to collegiate state in December 2018, with 19 competing members, where they qualified for collegiate nationals.

The scoring for powerlifting competitions can be done in terms of teams or individually.

“We don’t register for team scoring,” Kroll said. “We base it on individuals. The two highest scoring people in each weight class are scored, and based on their place, they’re assigned a certain amount of points.”

A normal powerlifting competition, outside of collegiate state and nationals, consists of squatting, deadlifting and bench pressing, Kroll said.

Each person gets three attempts at each lift and the three highest successful lifts are combined for a total, she said.

Cameron Severin, a second-year dual physics student and safety officer for the powerlifting club, said the competitions are split fairly even in terms of gender.

Kroll said one of the biggest challenges is with the club being run by students, as they don’t necessarily have methods like other sports teams do, but they do have connections and the knowledge of people who are kinesiology majors that can step up and help.

She also said each member coaches themselves, which tends to make them more dependable.

“But the main goal is to be successful with yourself,” Severin said, “It’s about being a better you to be stronger for yourself.”

Of the 23 members in the powerlifting club, Kroll said there were a few that stood out in terms of improvement throughout the season, like Thoger Boyum, who showed most improvement since collegiate state by putting 137 pounds on his total.

Kroll said Makayla Mattson went eight for nine lifts at the competition and only missed one bench press, as well as putting 105 pounds on her total weight since collegiate state.

She also said Erik Eaton, from Chippewa Valley Technical College, got all nine lifts at the collegiate competition.

“It’s the atmosphere and the group of friends,” Kroll said. “We all have at least one thing in common: We love lifting heavy weights. It’s the one thing that brings us all together. We just have a great time together.”

Dirks can reached at [email protected]