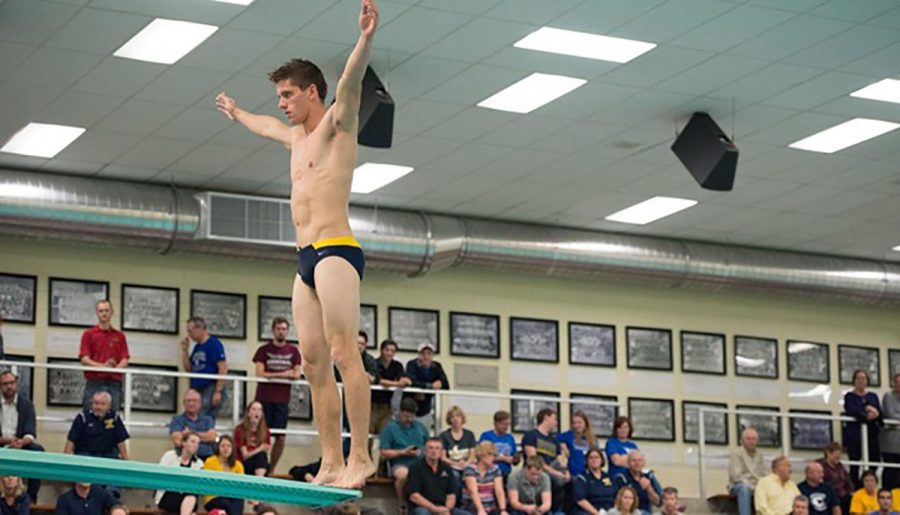 UW-Eau Claire had three of their swim and dive athletes representing them in Greensboro, North Carolina from over spring break at the NCAA Division III Nationals. Each athlete left the competition named an All-American, and two new school records were set.

Sam Senczyszyn, a fourth-year swimmer, competed for the women’s swim and dive team.

In the 100-yard freestyle event, Senczyszyn went on to win the consolation championship. With a time of 50.15, she finished in 9th place. Senczyszyn was named an All-American for her performance, and was also named an All-American in each of the other two events she competed in. She finished the meet with 34 total points for the Blugolds, placing her in 23rd in the team standings.

For the men’s swim and dive team, third-year diver Dylan Glumac-Berberich was also named an All-American. After undergoing surgery on a torn labrum his first year, Glumac-Berberich has been rehabilitating his shoulder ever since.

This season marked his first season under full health, and it proved in the results. In the three-meter dive preliminary, his 570.70 set a new school record.  In the finals, he finished as the runner-up by just 1.1 points.

“Bittersweet is a good description,” Glumac-Berberich said. “My first couple of dives at three meters were rough, but luckily I was able to hit my last couple of dives better than I’ve ever performed them and jumped into second at the end.”

However, Glumac-Berberich doesn’t care so much about finishing second. He said he’s just excited that his shoulder is healed well enough for him to properly train for this event.

“Before I could do this, I had to do extremely easy dives and do some dives to my feet (while recovering from his shoulder surgery),” Glumac-Berberich said. “I had to put in a lot of work this past season as well as in the off season to better my diving and I was happy to be able to see solid results and improvements.”

The men’s swim and dive team had another All-American at Nationals — third-year swimmer Collin Miller. Miller had arguably the top performance of all Blugold athletes at Nationals, claiming a national championship in the 100 breaststroke.

“In all honesty, it didn’t really hit me until I had cooled down, checked my phone, and saw the messages flooding in from family, friends and teammates,” Miller said. “Receiving a trophy and recognition is always great, but feeling that much love and support is far greater than any award.”

Besides the national title, Miller also took third in the 100-yard freestyle, finishing with a time of 43.88, a new Blugold record.

“Seeing my name on the record boards is always a great feeling, and an incredible honor,” Miller said. “I hope that my records can be used by the current and future Eau Claire swimmers as motivation to train and perform at their very best.”

Between the pair of Miller and Glumac-Berberich, they scored 81 total points, tying them for 13th place in the team standings. With a wide array of success earned team wide, the athletes remain non-complacent. They know that there is work to do to continue achieving at such high levels.

“No matter what level I am competing at, there is always room for improvement,” Miller said. “I have already begun training for next season with my biggest goal in sight.”

This offseason, Miller plans on beginning a YouTube series called “No Excuses.” This series will document his swim workouts every day of training. He claims that he is doing it so that when he graduates, he can look back and know that he gave his absolute best effort at all times.

These Blugolds also recognize the need for leadership in order to compete at the top levels of swim and dive.

“I expect myself to set a good example for my friends and teammates by training hard and being kind and welcoming,” Glumac-Berberich said. “The goal is to make sure that everyone is having a good time in both training and meets.”

With the swim and dive season for 2018-19 now behind them, the Blugolds will gear up for next season where 30 of their 34 athletes will be returning.