Optimism is essential for Blugolds on the tennis court

In their last home meet of the season, the UW-Eau Claire women’s tennis team achieved another win 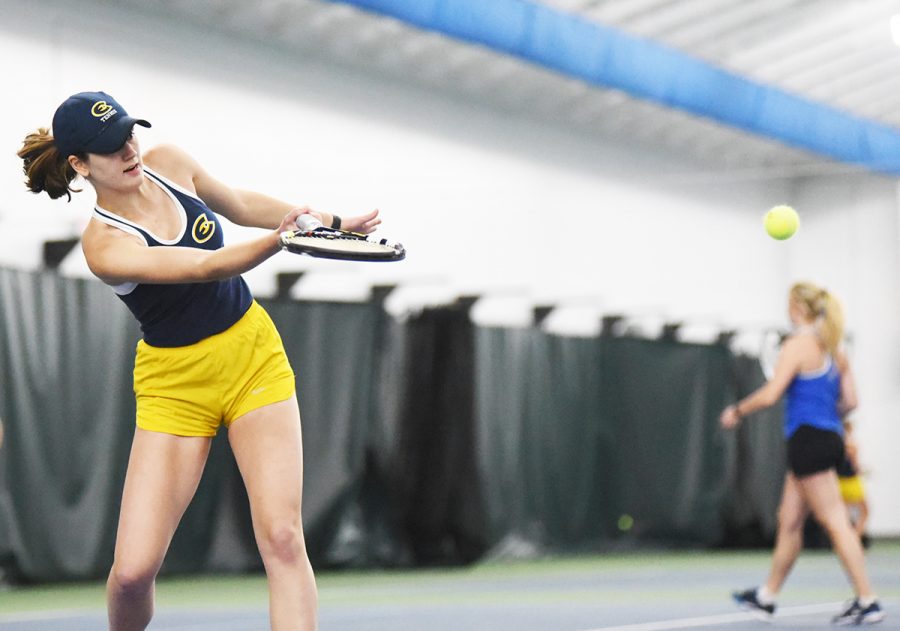 Lindsey Henderson, a first-year athlete, returns a ball during the doubles match against St. Scholastica on Sunday afternoon.

The UW-Eau Claire women’s tennis team brought their season ranking up to 12 wins and four losses after their competition against the College of St. Scholastica on Sunday afternoon.

Blugolds defeated the team on homeground at the John and Fay Menard YMCA Tennis Center with a score of 8-1.

According to Blugolds.com, the team had three victories right away in the doubles competition, with partners Natalie Wijesinghe and Lindsey Henderson winning 8-4, Hanna Zevenbergen and Molly Stewart winning 8-2 and Alexa Brooks and Emma Barnd also winning their match 8-2.

In the singles competition, Blugold Rachel Slonac won her match against College of St. Scholastica opponent Taylor Hays at 6-0, 6-1. Wijesinghe, Stewart, Zevenbergen and Barnd had victories in their singles matches as well.

Henderson, a first-year human resources and information systems student, said despite her loss in the singles competition, she was able to achieve her goals of remaining confident and focused throughout her matches.

“Every match teaches me something new, so now I can take what I learned on Sunday to set new goals for our upcoming match,” Henderson said.

Optimism like Henderson’s proved to be essential during the team’s competition on Sunday when one Blugold on the women’s tennis team was not not able to compete, Tom Gillman, head tennis coach, said.

“We had to scramble quick because our second best player wasn’t able to play,” Gillman said. “Our girls didn’t let it bug them.”

Zevenbergen, a third-year healthcare administration student, said this Blugold, who was one of the top players, suffered a last minute injury before the competition, so the line-up was changed.

“This match was a test for us,” Zevenbergen said. “We expected a lot from our freshmen and sophomore class, and they stepped up to the plate.”

Henderson stepped in to play in the doubles competition with Wijesinghe, Zevenbergen said, emphasizing that Henderson accepted the challenge and succeeded.

While winning is not everything, Zevenbergen said it was a nice note to end on, as this competition at the YMCA Tennis Center was the women’s tennis team’s last home match of the year.

Gillman said this year’s group of women on the team are reliable and easy to work with. One goal he said he has, however, is for first-years to continue to take risks.

“I think we’re doing (our goals) right now,” Gillman said. “Our older girls have done a nice job of leading (the first-years).”

Even with the adjustments that needed to be made this weekend, Henderson said the team did well and that she was proud of her fellow Blugolds.

“Every player still competed and played competitively no matter what position they played at,” Henderson said.

Although Zevenbergen is a third-year student, she said this year is her last of playing tennis because of a year-long practicum experience she will begin in June. She said for her last time playing a match as a Blugold tennis player in Eau Claire, the meet was a great one.

“There were a ton of fans, from students, friends and family members that came to watch, which was amazing to see to close out our last home meet before hitting the road for the next two weekends,” Zevenbergen said.

For their next competitio on April 20, the Blugolds will travel to Grinnell College in Grinnell, Iowa for two matches.