Men’s tennis pick themselves up after initial fall 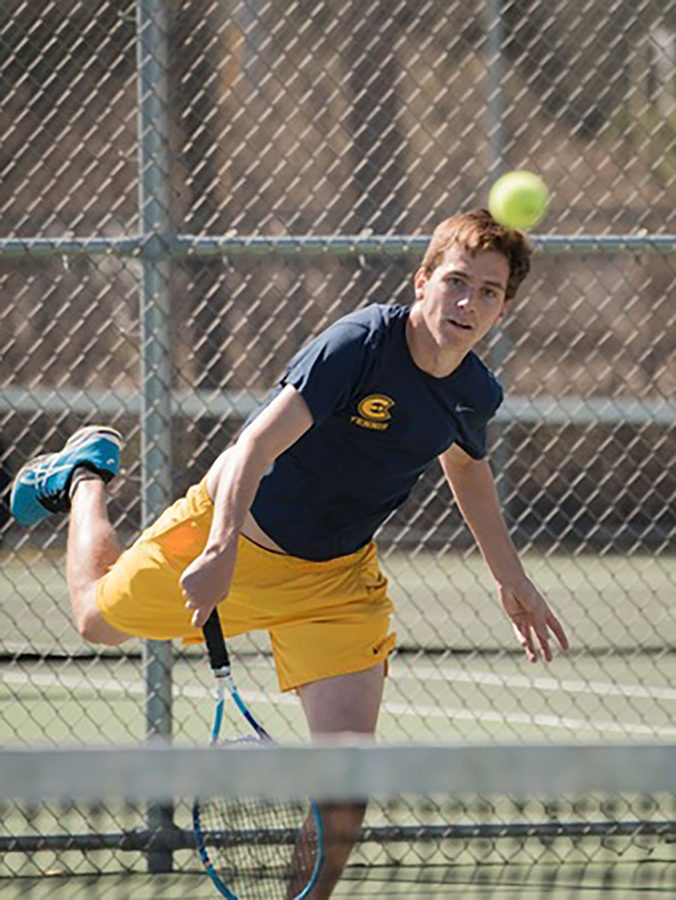 Washington University defeated the UW-Eau Claire men’s tennis team with a 9-0 victory April 5, but Blugolds achieved a 6-3 win against Principia College the next day.

In a weekend of two consecutive competitions, the UW-Eau Claire men’s tennis team went from losing their first competition to winning their second.

However, when they traveled to Elsah, Illinois, the next day to compete against Principia College, 11 wins for the Blugolds turned into 12, as they achieved a 6-3 win.

“That’s a tough team, you know,” Gillman said. “You’re going to have some ups and downs. Our guys had some success there, but it was hard to maintain.”

The following competition against Principia College made the playing field more even, Gillman said.

“We finally played a team we had a chance (to win against),” he said.

Gillman explained that the Blugolds also had the physical challenge of traveling eight hours to St. Louis, playing a match, traveling another hour to Elsah, sleeping, waking up and then playing another match.

“Hats off to the guys for hanging in there and winning the match (against Principia College),” Gillman said.

Blugolds’ Zach Janssen and Grant Mauthe won their match against Greg Sovie and Wyatt Dale of Principia College with an 8-5 score during the doubles competition.

Janssen, a third-year political science student, and Mauthe, a second-year physics student, said their success with the match started early.

“They were a really, really talented team,” Mauthe said. “We managed to be competitive really early on and break their serve pretty quickly. We were confident and cruised to that victory.”

Janssen echoed Mauthe’s sentiments, stating they had constant achievements throughout the match.

“We got off to a good start,” Janssen said. “Serving was definitely something that was on our side that day. We kept the pressure on the other team the entire time.”

Regarding their initial defeat against Washington University, Janssen and Mauthe said they knew that they were going to be playing against a tough team, but were able to take positives from the difficult match.

Janssen said it was important to approach the match optimistically, but also recognize the tough competition.

“It’s good to keep expectations and goals, but you need to keep in mind that you’re playing against the best of the best,” Janssen said.

Gillman said looking to the future, he hopes Blugolds can continue to compete against more difficult teams, such as at Washington University, because it allows them to see how they can improve.

“I think the whole goal of playing those tough teams … kind of gives you that idea of ‘This is what the best looks like’ and now we gotta take (a step back) and figure out what we need to do to head that direction,” Gillman said. “We still have a young team.”