Men’s tennis goes 1-1 over the weekend 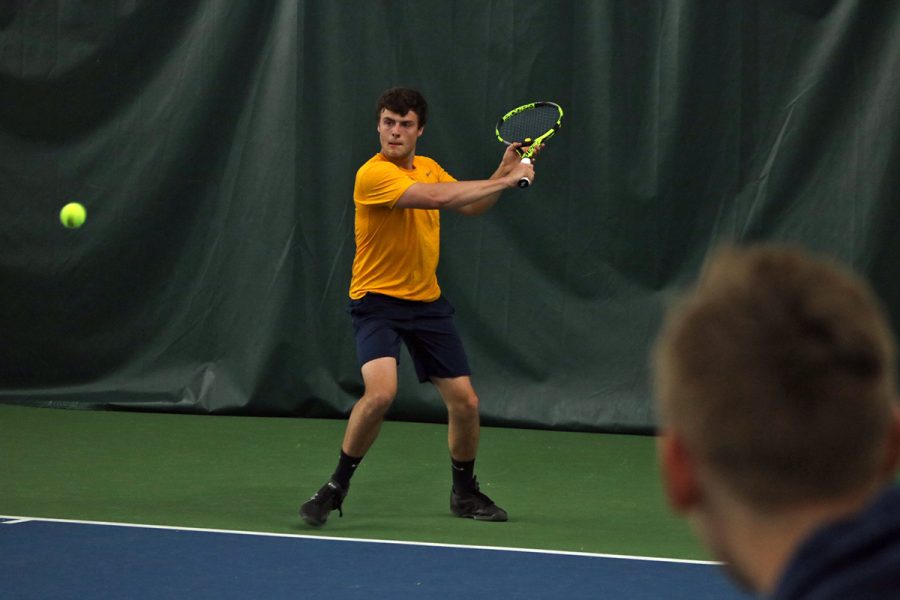 The UW-Eau Claire men’s tennis team competed in two matches over the weekend at the John and Fay Menard YMCA Tennis center in Eau Claire.

With a win against UW-La Crosse and a loss against UW-Whitewater, the Blugolds fall to 13-7 on the season.

“We were really competitive throughout the whole weekend,” Zach Jansen, a third-year athlete, said. “We played really good doubles in both matches and we wanted a win against Whitewater, but they are a tough team to beat.”

Despite their record, the men’s team is currently ranked No. 13 in the region, which is one of the toughest in the country, Jansen said.

“I would still say we are underrated at this point,” Grant Mauthe, a second-year athlete, said. “We are at a really cool point where we are rising through the ranks.”

With an extremely tough schedule, the Blugolds did the best they could with the challenging opponents they played, Jansen said.

“This year has been constantly stiff competition,” Jansen said. “It’s been a little bit bigger of a learning experience but it’s necessary experience going forward.”

The Blugolds had a convincing 7-2 win against UW-La Crosse on Friday, losing only one singles match.

“We played for the long run,” Jansen said. “We went out there with a very determined and specific mindset that we were gonna show these guys what we’re made of.”

Jansen led the way at the No. 1 singles position, beating his opponent in straight sets, 7-5, 6-2.

“I went in with the right mentality,” Mauthe said. “It’s been a big learning experience for me this year to learn how to be calm, and I think in that match I stayed calm even when the shots didn’t fall.”

On Sunday, UW-Eau Claire was defeated 6-3 by nationally-ranked UW-Whitewater in a close match.

“We competed really well,” Mauthe said. “ We embraced the competition, but they were a little bit sharper that day.”

For the second time that weekend, Jansen led the charge in singles, picking up a close win at the number one position.

“It was a mental battle for me,” Jansen said. “It just goes to show that when it’s deep into a match, I’m not gonna mess around, I’m here to win.”

In doubles, Jansen and Mauthe paired up at the number one doubles spot, beating their opponent by a margin of 8-6.

“Zach and I know each other’s games really well so we have a lot of chemistry,” Mauthe said. “I know where he’s gonna be at all times so he’s a great person to play with.”

Although the team is disappointed in the loss to Whitewater, it is an important learning experience for the future, Mauthe said.

“We have a lot more to prove,” Mauthe said. “ We definitely want to be better than 13th.”

UW-Eau Claire’s next match is on April 19th at 4 p.m. against Grinnell College in Grinnell, Iowa.