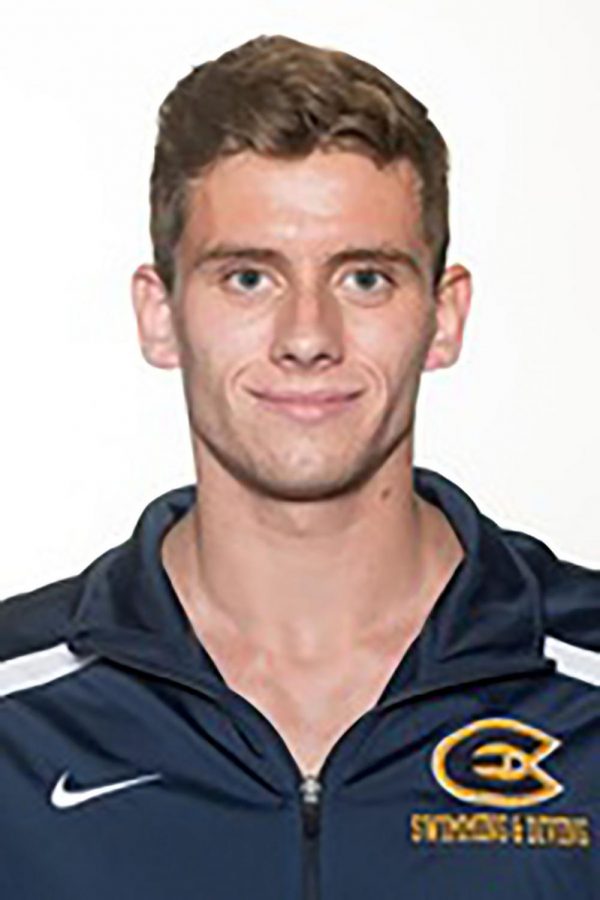 SUBMITTED Dylan Glumac-Berberich is a third-year diver on the UW-Eau Claire swimming and diving team.

Dylan Glumac-Berberich, a third-year diver on the UW-Eau Claire swimming and diving team, has gained an enormous amount of success throughout his years as a Blugold athlete, breaking records in both the one-meter and three-meter dive while also making a statement in this season’s Nationals.

Beginning his diving career junior year of high school, Glumac-Berberich said he chose to continue diving at Eau Claire as a first-year and has grown immensely in the past three years.

“I think mentally there’s a big difference from freshman year to now,” Glumac-Berberich said. “I have a lot more confidence going into my dives. I’ve gotten a lot better at going and missing a dive and then coming back and hitting the next dive or hitting the next couple which has been a huge change since my freshman year.”

Glumac-Berberich was able to showcase this mental strength at this year’s Nationals. He rose up to third place in prelims for the one-meter dive and ended up taking seventh overall. In the three-meter dive, he won the prelims and took second overall.

Glumac-Berberich again emphasized how he was able to separate himself from other excellent divers through his ability to stay focused.

“It all comes down to who can mentally handle the stress of competition,” Glumac-Berberich said. “There’s plenty of divers who hit all of their dives in their warm ups and then in the meet they kind of just miss the dives. I think me and my coach have done a really good job of preparing for the mental success.”

Glumac-Berberich said he has come to understand the importance of this kind of strength and prides himself in helping his teammates stay calm and focused during the meets.

“I think being able to help try to calm them down and get them in a good mood is one of the biggest accomplishments,” Glumac-Berberich said. “I’m proud of that of being there for them and trying to help us all have fun.”

Glumac-Berberich’s motivation and commitment has not gone unnoticed by fellow swim members. First-year swimmer Michael Bylander said he has appreciated the leadership Glumac-Berberich has brought to the team.

“He’s passionate, dedicated to his goals and a team leader,” Bylander said, “which shows because he was voted team captain.”

While Glumac-Berberich enjoys being successful, he says the team camaraderie is something he looks forward to during each meet.

“It’s just so fun just hanging out hanging around on deck,” Glumac-Berberich said. “I think that’s the best — just having a good time and cheering loud.”

Glumac-Berberich also discussed how the diving team’s ability to joke around and have a lot of fun is due in part to the small number of divers on the team, which has allowed for a tight knit culture.

“On the male side, it’s just me and one other guy,” Glumac-Berberich said. “We have five girls this year, so we have a total of seven people, guys and girls. We’re all pretty close, all good friends and all get along really well. We always joke around during practice and training.”

Glumac-Berberich is not sure what the future will hold for him and his diving career after graduation. He says it will heavily depend on what happens next season.

“It depends, we’ll kind of see what happens,” Glumac-Berberich said. “I mean, some people go do show diving, which they have those on cruise ships. You’re not judged at all, it’s kind of like acting and diving together and you put on a show. I might do a quick thing of that this summer and see how I like it, but it just kind of depends on how next season goes, we’ll see what happens I really don’t know. It’s hard to say at this point.”

Currently in the offseason, which consists of continuous diving and lifting, Glumac-Berberich looks ahead to next season, which will be his last with the Blugolds.

“I only have one more year left,” Glumac-Berberich said. “It’ll be my last year and I just really want to enjoy          every second of it and try to get the most out of it. That, and then I would like to win both boards at nationals next year, but we’ll see. The goal is to have a good time and make sure I’m really having fun.”