Anne Schreiber describes her journey towards running this monumental race 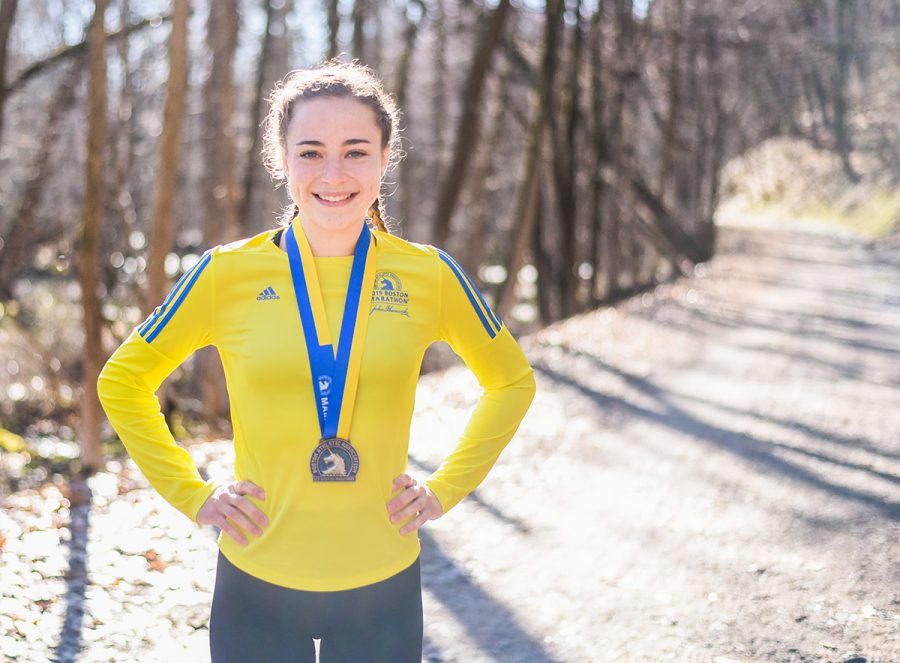 Anne Schreiber said her stress reliever is running, which led her to running in the Boston Marathon.

Among the group of over 30,000 people who participated in the 2019 Boston Marathon, there was a Blugold.

On the morning of April 15, she said she took a shuttle from her hotel to an area where participants went through security and then was bussed to Athletes’ Village, which is a large staging area where runners can stretch and relax.

She said it was there that she met people from all over the world, including Ireland and Australia.

Anne Schreiber, a fourth-year violin performance student at UW-Eau Claire, then prepared to run what was to be only the second marathon she has ever done. She said it had been scheduled to rain and thunderstorm, but the weather changed before the race.

“Right before the start, the sun kinda came out and actually for my whole race, it didn’t rain at all,” Schreiber said.

To qualify for the Boston Marathon, a person has to run under a certain time and that specific time is dependent on the person’s age. Due to Schreiber falling in the 18 to 34-year-old range, she had to run under the qualifying standard time of three hours and 35 minutes.

“I wanted to enjoy the crowds throughout the race,” Schreiber said. “There was never a spot where there was no one cheering.”

Schreiber’s journey towards the Boston Marathon, however, did not begin when she started training in August of this past year for it, nor did it start when she ran the 2018 Eau Claire Marathon — her first full marathon, where she placed third overall for women.

She said she ran for a short period of time during her sophomore year of high school, but did not completely commit to it until her first year of college.

“I could not even run a half mile,” Schreiber said, describing her experience with running before coming to UW-Eau Claire.

One of Schreiber’s friends wanted to participate in one of the Run Eau Claire events, so she said she decided to try something new as a first-year student.

Eventually, that same year, Schreiber discovered the Run Eau Claire events were associated with the UW-Eau Claire Triathlon Team, so she joined that and the Distance Running class as well.

“It was more just coming into college and wanting to kinda be a new person and then find myself,” Schreiber said.

Matthew Evans, a professor in the physics and astronomy department, the faculty advisor for the Triathlon Team and the leader for the Distance Running class, said he has known Schreiber since she was a first-year student.

“I like to see people do stuff that they’re not usually comfortable with,” Evans said. “(Anne) was not a runner.”

In terms of how people often branch out from who they used to be when they come to college, Evans said he noticed this with Schreiber.

“She was looking for something other than just music,” Evans said.

As a violin performance student, Schreiber said she had started playing the violin when she was 7 years old. She said she needed to continue the activity when she came to college, since it had been a part of her life for so long.

However, Schreiber said she needed something else in addition to playing the violin.

“Some people say music (relieves stress), but when music is your profession, you need a different stress relief,” Schreiber said.

The effort to try new things, Evans said, allowed Schreiber to grow as a musician and an athlete.

“Having that social and physical outlet allowed her to be better at both (running and playing the violin),” Evans said.

Fast-forward to Schreiber’s third year of college and when she was training for the 2018 Eau Claire Marathon. She said she looked at her times and began to wonder what she would need to qualify for the Boston Marathon.

When she researched the times, she said to herself, “I think I can do it.”

Evans said confirmation from others also prompted Schreiber to set running goals, such as striving to participate in the Boston Marathon.

“She had no idea how good she was doing until someone told her,” Evans said. “It was a realization that didn’t come until she crossed the finish line.”

On top of being the triathlon captain for the Triathlon Team and being involved in the university orchestra and a scholarship quartet, Schreiber is also a teaching assistant for the Distance Running class.

With this role, Evans said Schreiber’s experience of becoming a committed runner as a first-year student has given her the opportunity to show others how they can embark on a similar transformation.

“She’s been at the very beginning of starting a journey where she didn’t know it would change her and allowed others to see themselves differently,” Evans said.

Hannah Brakarsh, a first-year kinesiology student, is in the Triathlon Team with Schreiber and said she admires Schreiber for her speed and commitment.