Throwing off the competition 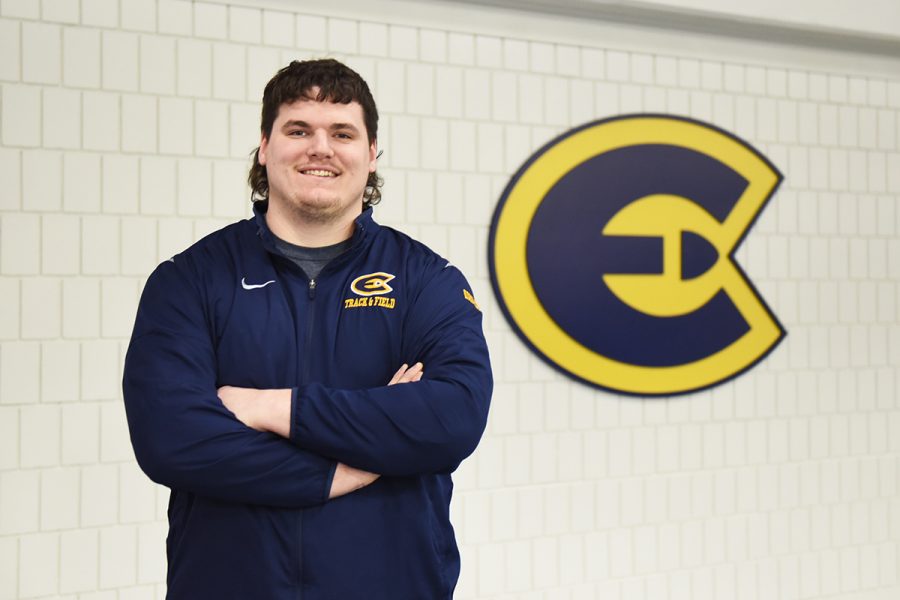 David Kornack, national champion in shot put and national field athlete of the year, poses for a photo.

While stepping into the seven-foot shot put circle, David Kornack, a fifth-year actuarial science student, said he was nervous. He told himself to relax, spun around and pushed a 16-pound shot through the air, where it flew and landed just shy of the 20-meter mark.

With this throw, his first of the competition, Kornack won the shot put national title in the NCAA Division III Indoor Track & Field Championships with a distance of 19.83 meters, the event’s longest throw in 36 years.

“I came in and I was warming up really well — a lot better than I usually do warm-up — and then I just kept telling myself to relax and go out there,” Kornack said. “I usually don’t throw very well on my first throw, but I think the nerves were just right and everything else just kind of fell into place.”

Chip Schneider, the head coach for the men’s track and field team, said Kornack’s drive became evident two years ago as he spoke to Kornack while getting off the bus at the 2017 outdoor track and field national competition. Kornack told Schneider he was sure he would be competing for two more seasons, rather than competing in only one more year of track before graduating.

“I knew then that he was driven to win a national title,” Schneider said. “You could tell that just getting a taste of being at nationals and becoming an All-American was not going to be enough.”

Just four days after Kornack’s national title win, the U.S. Track & Field and Cross Country Coaches Association named him the National Field Athlete of the Year for the 2019 NCAA DIII indoor season. As Kornack read the news on Twitter, he received a congratulatory text from his coach, Roger Steen.

“I definitely didn’t expect it,” Kornack said. “I wasn’t even the nominee for it from our region. The nominee went to Andrew Jarrett from La Crosse. He didn’t have the best meet at nationals but I did, so it kind of flipped over and then I got the award.”

After attending Illinois State for a year to play football, Kornack transferred to UW-Eau Claire to pursue actuarial science. Upon successfully trying out for the track and field team, he began throwing for the Blugolds, an event he first competed in during his sophomore year of high school.

Despite holding five of the top eight marks in the NCAA DIII record book, Kornack said his entrance to collegiate track and field did not look quite as successful. In his first year he barely qualified for conference, which includes the top 25 throwers in the conference. At the end of the 2019 indoor season, however, Kornack ranked 10th in the country.

“The growth that I’ve had here has been pretty crazy,” Kornack said. “I definitely attribute that to my coaches, they spent a lot of time on me and put in a lot of effort with me, and will never say no to coming in for an extra practice session or staying late after practice or anything like that, so I really appreciate all that.”

Kornack said his coaches have had the largest impact on him during his track and field career. His high school football coach was the person who first encouraged him into becoming a thrower during the spring of his sophomore year.

“I definitely credit a lot of my love for the sport to my high school coach,” Kornack said. “I never would’ve did it if it wasn’t for him, he made it really fun for me.”

In addition to his coaches, Kornack also said he finds support in his friends and family back in his hometown of Edgar, WI. He said he likes to give back to the community through volunteer work, whether it be with the middle school football team or events run through the Lions Club, and organization his parents are involved in.

“I think I’m just really appreciative of where I’m from and being blessed with the communities that I’ve grown up in,” Kornack said. “I’ve been really fortunate in my upbringing and the people who’ve been surrounding me.”

Kornack’s kind and caring personality is evident both on and off the track, Schneider said.

“He’s a great person,” Schneider said. “I have not met anyone who doesn’t believe this to be true. He is a great athlete, but this pales in comparison to what he is like as a person. We will miss him for this after this year more than any points he scored.”

As his last outdoor track season begins, Kornack said his biggest goal is to win nationals, and his second most goal is to set the all-time record for outdoor shot put.

“The third goal I have would be setting the record at the conference meet,” Kornack said. “My coach, Paul, has the record right now of 19.08. I’d like to beat that. It’s kind of a fun competition we have. I think he’d be excited to see that if someone was to break it, it was me.”

The men’s outdoor track and field team will open the season during the Ashton May Invite at 11 a.m. this Saturday at UW-La Crosse.