Blugolds end their season and set a new school record 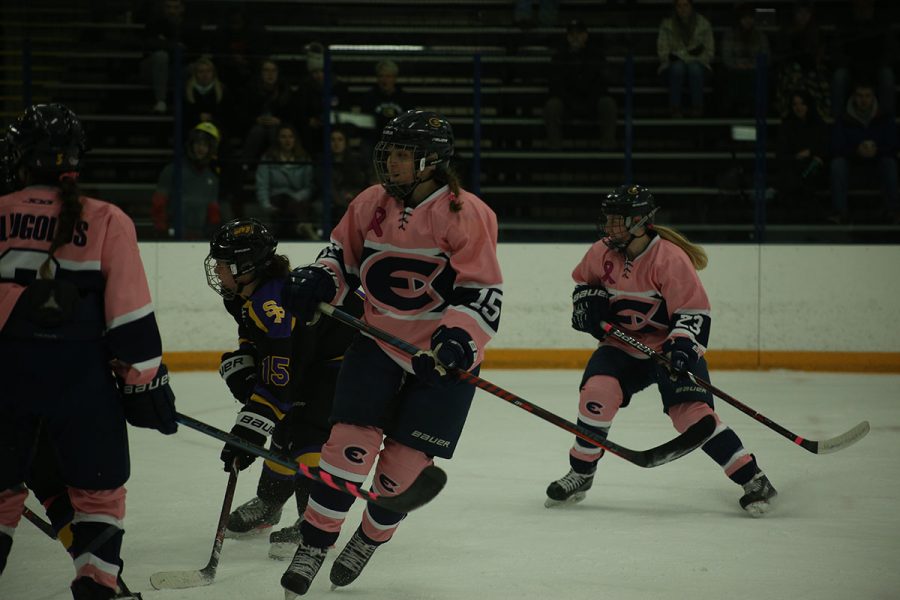 In this photo from our staff archives, Erin Goodell, a fourth-year forward, takes the puck down the ice.

The UW-Eau Claire women’s hockey team ends their season after a defeat in the Quarterfinals to St. Thomas on Saturday, March 9. St. Thomas is the top-seeded team in the NCAA Division III bracket. The Blugolds end their record-setting season with a record of 21-6-2.

Erin Connolly, a third-year goalkeeper, defended the goal for the full first period, resulting in a tied game of 0-0 at the end of the first period. Approaching the game, the women were prepared for what could happen.

“Anytime you go into a game that could potentially end a season, there’s always an extra sense of urgency,” Connolly said. “We came into it calm and confident, knowing that we would be fine if we stuck to our game plan and played Blugold hockey.”

St. Thomas would come back in the second period with a score on the goal, which the Blugolds retaliated to with two goals of their own. Elizabeth Bauer, a third-year forward, scored 12 minutes in, and six minutes later, Holly Turnbull, a fourth-year defender, would score the second.

St. Thomas hit back hard in the third period, scoring three goals. Courtney Wittig, a fourth-year forward, would score UW-Eau Claire’s third goal with 15 seconds to spare, resulting in a final score of 4-3.

“The whole game was exciting,” said Connolly. “It was a great atmosphere to play in, in front of our friends and family that made the trip. Seeing them support us is always a great feeling and make the momentum swings more exciting.”

The Blugolds’ season ends with a third-straight year of record setting for the team. For the women on the team, the season has been rewarding.

“A great part of our season was getting big wins against our conference opponents,” Connolly said. “We had the opportunity to play for a regular season WIAC championship, which just shows how far this program has come. Being a part of a team that sets records and continue to raise the bar is such an honor.”