Blugolds take on the slopes as winter season continues 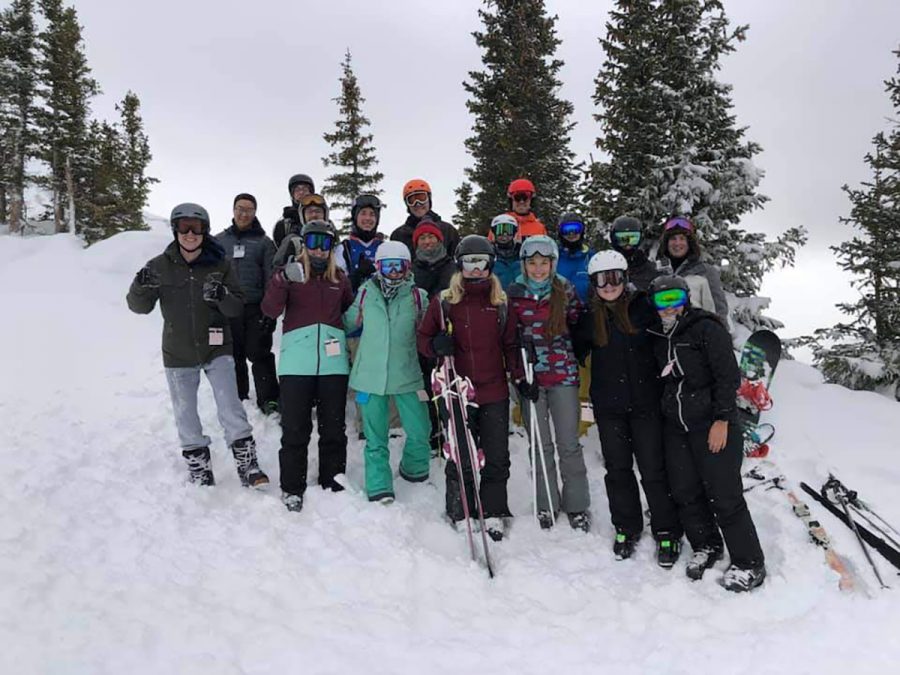 SUBMITTED The ski and snowboard club poses for a picture while on their annual Colorado trip. This year, over winter break, the club went to Telluride Ski Resort.

As piles of snow grow and gusts of cold air continue to arrive in Wisconsin, one particular group on the UW-Eau Claire campus has prospered throughout these weather conditions.

The ski and snowboard club started in 2014 and began as a group of four students, which has now grown to 80 active members, according to Lance Tanel, a fifth-year actuarial science student, and president of the club.

Tanel created the club as a first-year student and said he was inspired to establish it as a result of not knowing anyone at UW-Eau Claire, but being passionate about skiing.

“At the time, I didn’t know anyone at this university,” Tanel said. “I didn’t have a car, but I really loved skiing, so I figured it would be a great way for me to be able to get out on the slopes and meet new people that also know how to ski.”

Beyond creating this organization to form friendships and participate in an activity he enjoyed, Tanel said the ski and snowboard club was also founded with the goal of making those activities more accessible and affordable for students.

“I remember when I got into skiing, I was in sixth grade, and I was mowing lawns at the time,” Tanel said. “It basically took me a month to save up to go skiing one time. Yeah, it was really expensive.”

Tanel said he recognizes people may not want, or be able, to try skiing or snowboarding when it is an expensive sport. However, he said he also wants to share this activity that he enjoys with others, knowing the winter season can be dreary.

“I basically wanted to make the club so anyone could show up and we’d have a pair of skis for them to use and they could get discounted lift tickets, so they could actually try it out for relatively cheap,” Tanel said.

Megan Manthey, a third-year criminal justice student and vice president of the ski and snowboard club, said she and other leaders of the group call hills and resorts to get discounted rates and rental gear for students who do not have their own.

Tanel said places such as Trollhaugen, a ski resort in Desser, Wisconsin, have also granted the club discounted lift tickets for $15.

He said school buses are used to transport students for three big trips and then the club carpools for the other trips. Once the winter season officially begins, Tanel said the club attempts to go on a trip every weekend.

Among Trollhaugen, Tanel said the club also travels to places such as Christie Mountain and Granite Peak Ski Resort.

With all of these trips, Tanel said if students pay a $30 membership fee, they do not have to pay for transportation. Otherwise, each trip costs $5 to go on.

Manthey and Tanel both said they truly attempt to make involvement in the ski and snowboard club as affordable as possible to spur students to join.

Every year, Tanel said the club seeks out new members at Blu’s Organizations Bash in September, and then one of the current members hosts a cookout in their yard, so everyone who just joined at B.O.B. can meet everyone else in the club.

Before the season starts, Tanel said a member will also host a waxing and sharpening event for members’ skis and snowboards to get them excited for the weekly trips to begin.

Manthey said she appreciates that the club hosts these activities in the fall and spring as well.

Once winter break approaches, though, Tanel said the ski and snowboard club takes an annual trip to Colorado. He said the club chooses a different location every year, but for this past break, they traveled to Telluride Ski Resort in San Miguel County, Colorado.

Tanel said 32 students went on the trip this year and while there, they had a video contest for the “coolest video” or the “greatest wipeout on footage.”

The Colorado trips, Manthey said, hold her favorite memories from being involved in the club.

“You just make so many friends and meet so many new people,” Manthey said. “You see them around campus and you have those shared experiences.”

With spring graduation arriving soon and Tanel being one of the Blugolds who will walk across the stage, he said he is nostalgic about departing from the club that he created.

“I’m definitely going to miss this, but I do plan on coming back on the Colorado trip next year in January,” Tanel said.

Since the club initially began, Tanel said it has not only grown significantly in numbers, but also in how it is more organized and manageable, as people who joined have offered to take leadership roles.

Manthey said one of the reasons she joined the ski and snowboard club was to find people to ski with, and has, in turn, become a part of a group that makes her feel like she belongs.

“We’re really inclusive,” Manthey said. “I found a place I felt that I fit in.”