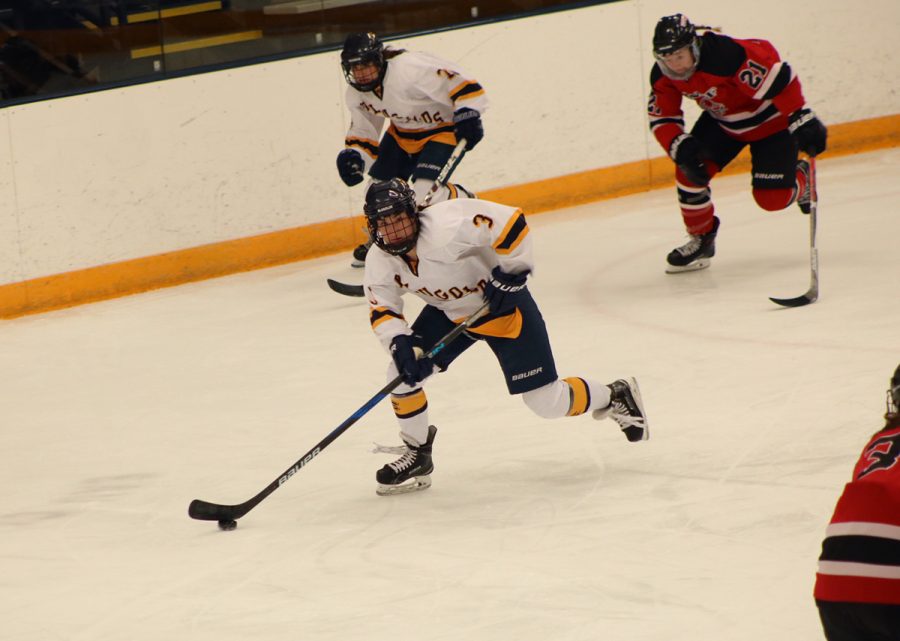 In this photo from November, third-year forward Elizabeth Bauer battles against UW-River Falls.

For the second year in a row, UW-Eau Claire women’s hockey defeated UW-River Falls in the the WIAC championship game, also known as the O’Brien Cup.

The Blugolds traveled to River Falls for the last game of the tournament, where they defeated the Falcons 7-3. Holly Turnbull, a fourth-year defender, said winning the tournament for the second time was unexpected but exciting.

“It felt really cool, it was a special thing,” Turnbull said. “ It was also kind of a familiar feeling. We’ve been in the championship game against River Falls before.”

The team headed into the first intermission with a 4-2 lead. The second period consisted of back and forth play between the Blugolds and Falcons, with Courtney Wittig, a fourth-year forward, scoring the lone goal of the period.

Heading into the third period, Blugolds held a strong lead of 5-2. After another series of back and forth plays, the Falcons scored their first goal since the first period. Wittig quickly returned their goal with one of her own, bringing the Blugolds to 7-3 at the end of the game.

Wittig said the team felt prepared heading into the game due to the several games they had already played against UW-River Falls throughout the season.

“Going into the game we knew what they were made of,” Wittig said. “We’re excited to see the trophy going home to Eau Claire.”

Turnbull said it was exciting to not only take home the trophy, but also see the seniors excelling during their last WIAC game.

“It was memorable knowing where we started from with the hockey program freshman year to where we are now,” Turnbull said. “All our seniors were putting points up, and it was a really cool experience.”

Two days after the WIAC championship game the Blugolds found out their team was selected for the NCAA tournament. They will be competing against St. Thomas on Saturday in the quarterfinals.

In preparation for the next game, Wittig said the team will continue practicing as they have throughout the season.

“We’re just playing one game at a time,” Wittig said. “We put every game towards the championship. Our coach likes to say, ‘if you win the day, you win the game.’”