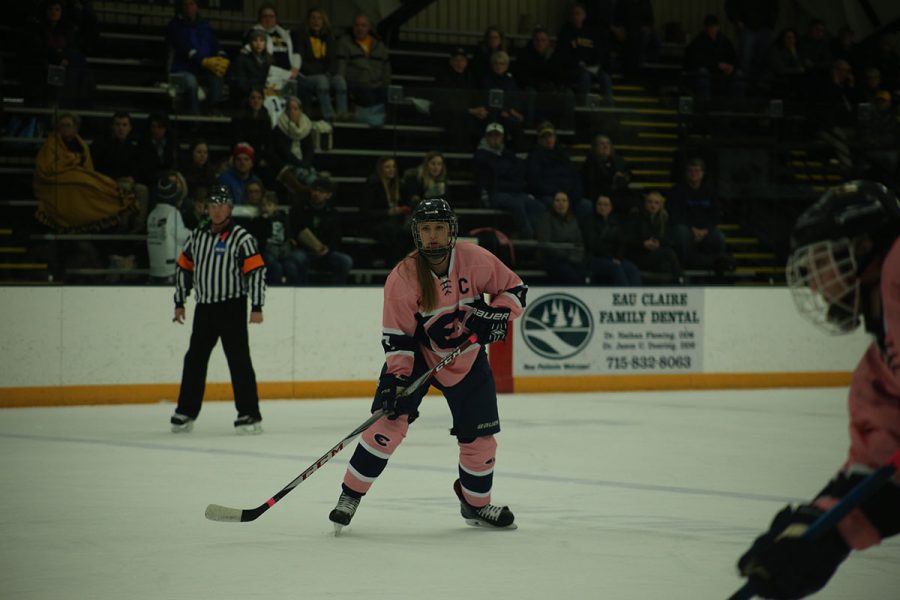 Holly Turnbull, a fourth-year defender, awaits a pass from her teammates at their Cancer Awareness Day Game Saturday.

The UW- Eau Claire women’s hockey team came away with two victories this weekend against UW-Stevens Point as they head into their last stretch of conference games.

Friday marked the Blugolds’ first matchup against the Pointers. UW-Eau Claire took care of business, defeating Stevens Point 4-1. Saturday proved to be an even bigger display of Blugold dominance. Adorning pink and blue jerseys for the Cancer Awareness Day game, the UW-Eau Claire women’a hockey team took the ice on Saturday on their home turf, coming away with a massive 9-1 win against the Pointers.

As the second period began, it was clear that the Blugolds showed no intention of slowing down as Zavoral scored her second goal of the game at the 1:07 mark followed shortly by Morgan Zirbel, a second-year defensive player. A penalty on UW-Eau Claire gave the Pointers an advantage as the second period came to a close, but third-year forward Elizabeth Bauer was able to break free, scoring a short-handed goal for the Blugolds and making the score 8-0 as the period ended.

After eight unanswered goals, the Pointers were finally able to score in the third period, but the Blugolds quickly came back as Wittig put in her second goal of the night, making the final score 9-1.

The monstrous 9-1 win was exciting, but Head Coach Erik Strand said the sheer range of players who scored — 7, to be exact — was a cause for even more excitement.

“The diversity of the people that are scoring goals is probably the most exciting thing for us. When we build this team and recruit players, that’s what we’re looking for is to try and create that situation where it’s not just one person.”

This, as well as not taking Friday’s victory for granted, was a recipe for their success, according to Zavoral.

“Going into this game, we really knew that we could beat them, and they were a really good opponent, but we just knew we had to regroup and focus on winning this game,” Zavoral said.

Wittig agreed with her teammate. Despite winning the previous Friday, she knew that they had to keep up their intensity in order to come out and win the second game as handily as they did.

Now that the Blugolds have taken care of the Pointers, they look ahead to another conference game matchup against UW-River Falls at 7:05 p.m. on Feb. 9 at River Falls and again at 2 p.m. on Feb. 16 at Hobbs arena.