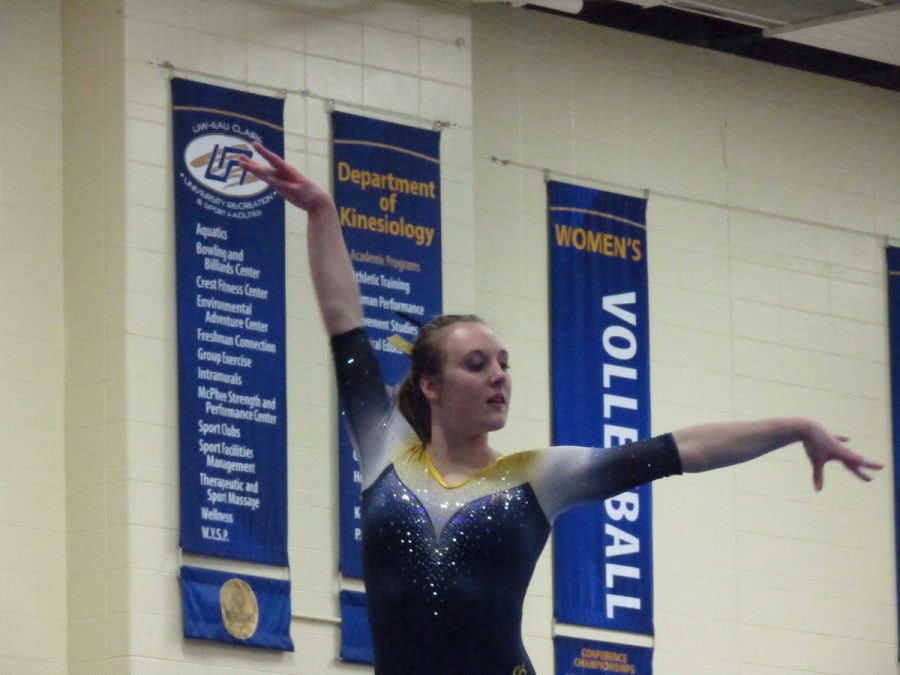 The UW-Eau Claire women’s gymnastics team won their first meet of the season this weekend. The Blugolds triumphed over Gustavus Adolphus College on Feb. 9 at the McPhee Strength and Performance Center, winning by a score of 185.100 to 183.825.

“This was our best beam outing, they did awesome,” Head Coach Danielle Schulzetenberg said. “Way better team beam, and floor was just so much fun.”

Schulzetenberg  attributed the Blugolds’ victory on Saturday to the team’s winning attitude, and the relaxed environment made for the perfect recipe of success.

“This team doesn’t give up, they don’t stop fighting and that’s what it’s going to take come the end of the season,” Schulzetenberg said. “I’m just so proud of them, I’m just so happy. They don’t give up they go and fight.”

The Blugolds showed true excitement and support for their team during the meet. Loud cheers and festive celebrations echoed through McPhee.

“We just knew that we were gonna go out there and we were gonna hit it,” Amelia Moorehouse, a fourth-year gymnast, said. “We’re hoping to keep building from here.”

The Blugolds plan to keep up the fight this season all the way to nationals.

The Blugolds will be back in action during their next meet at 6:30 p.m. on Feb. 15 at Hamline University.

Walleser can be reached at [email protected]