UWEC swim and dive teams place high at the conference

Great competition and many individuals highlight the weekend 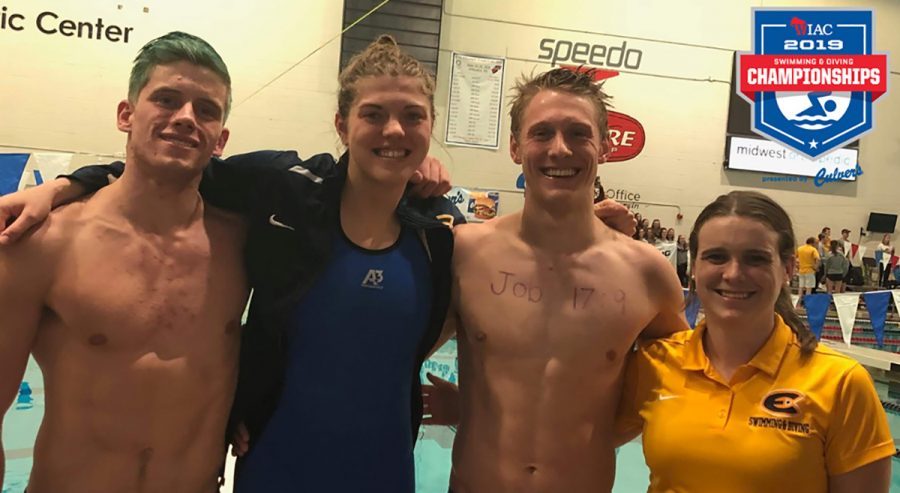 The UW-Eau Claire swim team took five of the top awards this weekend.

Miller, whose 100-meter breaststroke is currently the national time leader, spoke on the team’s camaraderie and success. He said that each athlete has improved tremendously from the beginning of the year and that in all of his 16 years in the sport, has never been around a harder working bunch. Miller said that on a daily basis, the team is coming in to practice early and staying after hours. All the hard work has built the team into something more like a family.

“We laugh, cry, and suffer together, which only brings us closer,” Miller said. “I consider them my family and closest friends.”

The team, together, faced issues bigger than swimming and diving. The athletes confided in one another as the season went along, getting through some of life’s toughest challenges through the friendship of one another.

“I got to see some of my best friends push through some of the hardest personal and physical struggles that life can throw at you,” Miller said. “And that makes me more proud than I can even begin to explain.”

With the team riding a wave of momentum as conference action finishes, they will prepare for nationals in Greensboro, NC from March 20 to March 23. Considered one of the favorite meets throughout the swim team, they will get an opportunity to compete at the highest level. Although conference competition is complete, their work is not done yet.

“It’s always a blast to have the opportunity to compete with such incredible athletes and see just how far we have all come,” Miller said. “The only thing I expect at nationals is to have a great time.”