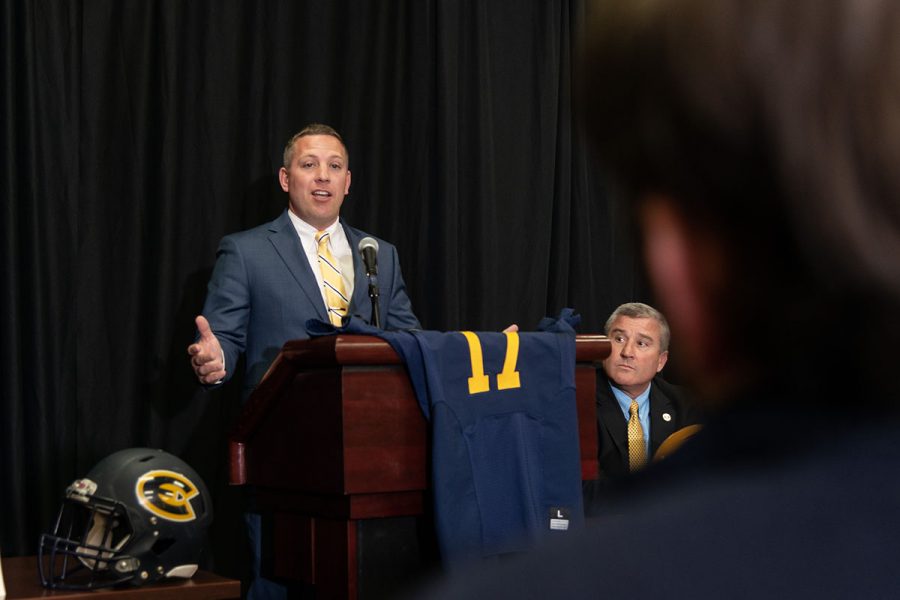 Beschorner takes over as the Blugolds’ 17th coach in history after their best season since 2012.

This article is also posted on blugoldmedia.org.

The University of Wisconsin-Eau Claire has named its newest head football coach.

Wesley Beschorner, previously the quarterback coach at the University of Maryland, was announced the leader of the Blugold football program at a press conference Tuesday.

Beschorner takes over for former-head coach Dan Larson, who stepped down on Jan. 11 after three seasons with the Blugolds, to join North Dakota State University. A nationwide search for a head coach began immediately and ended when UW-Eau Claire landed the “Northern Iowa farm boy,” as Athletic Director Dan Schumacher called Beschorner via Twitter.

A native of Lohrville, Iowa, Beschorner fought back tears as he expressed his gratitude and excitement to be UW-Eau Claire’s 17th head football coach. After moving around the country the last few years, Beschorner’s ties to the Midwest and ability to be closer to family have him thrilled to lead the Blugolds.

“Moving back to the Midwest was No. 1,” Beschorner said. “I’ve always wanted to be a head coach and seeing the vision this program has is what I wanted.”

While Eau Claire brings Beschorner closer to his family, the former University of South Dakota standout brings UW-Eau Claire extensive experience and knowledge from both Divisions I and II.

In 2018, Beschorner joined the Maryland staff for an offense that ranked third in the Big Ten in rushing touchdowns and rushing offense. In addition, five players earned All-Big Ten honors. Prior to that, he was the University of Pittsburgh quarterback coach in 2017 and the offensive quality control assistant at Rice University in 2016.

Beschorner was an All-American quarterback at University of South Dakota and a Harlon Hill finalist his senior year — an award given to the most valuable player in NCAA Division II. After his playing days, Beschorner coached at his alma mater for 10 years, working his way up from graduate assistant to associate head coach.

With the Blugold football program in a much different position now than three years ago when Dan Larson was hired, Schumacher said the candidate pool was much more talented with more than 100 applicants. Schumacher said it was ultimately Beschorner’s “good energy” that ended the six-week search.

“From an offensive standpoint, someone with his expertise I felt would bring so much and get us there so much quicker,” Schumacher said. “That expertise along with our defensive expertise complements each other and will move the program forward.”

Beschorner will surely look to improve a Blugolds’ offense that ranked seventh (out of eight teams) in the WIAC last season.

Zachary Zilm Jr., a senior quarterback, also felt his new head coach’s energy and said he could tell at the first team meeting that Beschorner is excited to be at UW-Eau Claire. Zilm Jr. said that with a top defense already in place, Beschorner could take the offense to new heights.

“I think Coach Beschorner can help build on the success of last year’s team by helping our offense take the next step,” Zilm Jr. said. “He was a great player at South Dakota so I’m just excited to get to learn the game from his perspective and experiences.”

Despite having his work cut out for him offensively, Beschorner inherits a team moving up the ladder. The Blugolds finished 4-6 in 2018, their best season since 2012. UW-Eau Claire also finished sixth in the WIAC, a good ending for its best finish since 2013.

“From a student-athlete standpoint, the town and school gives you so much,” Beschorner said. “We are excited to compete for championships, recruit and develop student-athletes and help them graduate with a world-class degree.”

Sam Romanski, a 2nd Team All-American and WIAC sack leader last season, said Beschorner is a players’ coach and very knowledgeable on first impression. Their new head coach’s winning past coupled with the growing success of the program has Romanski with high hopes.