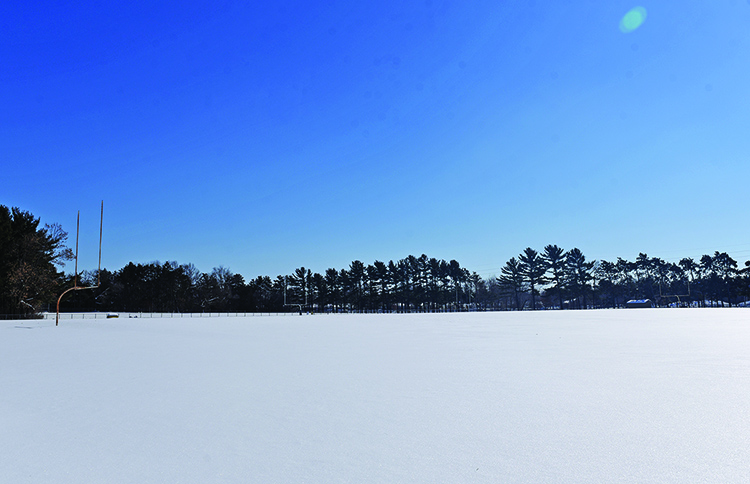 Enhancements will be made to Simpson Field starting this summer.

This summer, enhancements will be made to Simpson Field following an approval by the UW System Board of Regents on Feb. 8.

Michael Rindo, assistant chancellor for facilities and university relations, said in the first phase of the project a new artificial turf field will be put into place, along with infrastructure for future phases of the project. The project will be paid for by the UW-Eau Claire Foundation.

In addition to the infrastructure around the field itself, Rindo said the player’s practice field east of Simpson Field will be turned into areas for field events for track and field. The ultimate goal with this project is to eventually allow UW-Eau Claire to once again host outdoor track meets.

Head track and field coach Chip Schneider, who had some involvement in helping to plan out the throwing areas and timing equipment, said he is excited to see the enhancements come to Simpson Field.

“Any time there’s upgrades it’s a positive,” Schneider said. “It’s exciting because I’m in my 17th year here, and this is first major thing done to aid indoor/outdoor track other than a basic resurfacing. It’s exciting to see something new being done to enhance what we have already.”

Eventually the upgrades will allow for the track and field team to not only host meets, but also have a spot for spectators to sit. The ability to host track meets will also help aid in recruitments for the program, Schneider said.

“Any time you can host it’s a great thing,” Schneider said. “When our recruits come here now, they know there’s not going to be any home meets. It’ll be good to know kids will be able to run at home. Visually, it’ll also look a lot different when touring around to have a facility up to par with the other schools in the conference.”

The upgrade of Simpson Field will also allow UW-Eau Claire football to practice on campus, rather than at Carson Park. According to an article on UW-Eau Claire’s website, Blugold football is currently the only WIAC program without an artificial turf practice field.

“Currently Simpson Field is a natural turf, crowned — or higher in the middle — field, which is an old-fashioned football field,” Rindo said. “Natural turf doesn’t hold up well in rain, which is unsafe, and outmoded. We’re installing artificial turf to flatten the field and make it safe for athletes.”

In addition to aiding the track and field and football programs, Rindo said the new field will also prove useful to other groups within the student body.

“It will be used for a variety of purposes including football, women’s soccer and lacrosse,” Rindo said. “It can also be used by recreation for field sports. Marching band can use it at band camp, too, before they switch back over to Haas.”

Both Rindo and Schneider said they believe the Simpson Field improvements will be a great benefit to not only football and track, but the student body in general.

“There are some exciting things going on around campus as far as building,” Schneider said. “The last 8-10 years have been busy with construction, which can be troubling at times, but in the end, the results are worth it.”