Looking past the results and towards the future 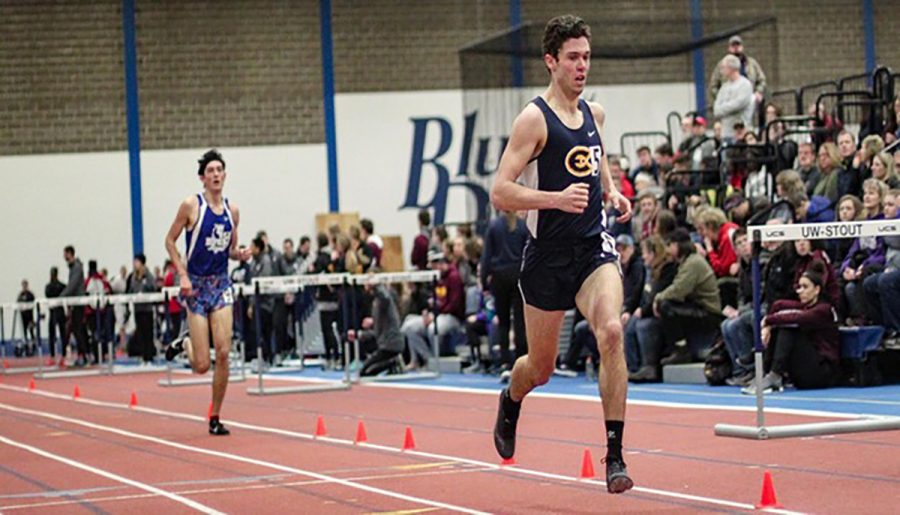 Both men’s and women’s teams placed third at the UW-Stevens Point Invite Saturday.

Poised for their events and prepared to run, throw, hurdle or leap, the UW-Eau Claire men’s and women’s track and field teams competed on Feb. 2 at the UW-Stevens Point Invite. Both teams placed in third, with Northern Michigan University winning the meet on the women’s side and UW-Stevens Point winning on the men’s side.

Chip Schneider, head track and field coach for UW-Eau Claire, explained that typically when this meet arrives, the teams are exhausted from the intensive training they do in the weeks leading up to it.

“This is a mid-season meet, so we tend to train intensely through this past week, which means we are usually tired by the end of the week and the meets,” Schneider said.

Despite the athletes’ fatigue, Schneider stressed that at this mid-season point, the practices are more important than the meets.

Additionally, Tommie Brenner, a fourth-year kinesiology student and an athlete on the UW-Eau Claire track and field team, echoed Schneider’s claim about how tired the teams were, but said she was ultimately proud of how they united through supporting each other and working together.

“We kind of came off of tough weeks, the last three weeks,” Brenner said. “Everyone was a little tired. We all know we’re tired, but it was nice to see everyone support each other.”

Soaring through the air at a height of 3.53 meters, Brenner herself placed first in pole vaulting at the UW-Stevens Point Invite. Her performance then became ranked fifth in the conference and 25th in the nation. In being informed of these recognitions, Brenner said she was content and intends to develop her vault even further.

“It feels good going into conference knowing I’m in the top eight,” Brenner said. “Especially my jumps, knowing that there’s room for improvement. Knowing I won it was a relief from the pressure. It let me vault like normal and let me work on the things I wanted to work on.”

Kornack, a fifth-year actuarial science student, presently sits in first place in the nation for men’s shot put. Although he said it is a good feeling to have this recognition, he stressed he wants to continue improving.

“It’s cool to have that ranking, but you don’t get anything until the end of the year,” Kornack said. “That throw isn’t as far as I want to go. Definitely one of my goals (is) to exceed (it).”

Ultimately, Kornack emphasized the men’s and women’s track and field teams have goals and optimistic attitudes beyond the UW-Stevens Point Invite this past weekend.

“Our end goal is to be the best we can be at the end of the year,” he said. “I’m expecting big things out of both women’s and men’s teams this year. We have a lot of great guys coming back, a lot of underclassmen coming back. I think it’ll be an exciting year for us.”

On Feb. 8, the men’s and women’s track and field teams will be at the St. Thomas Invite in Minneapolis.