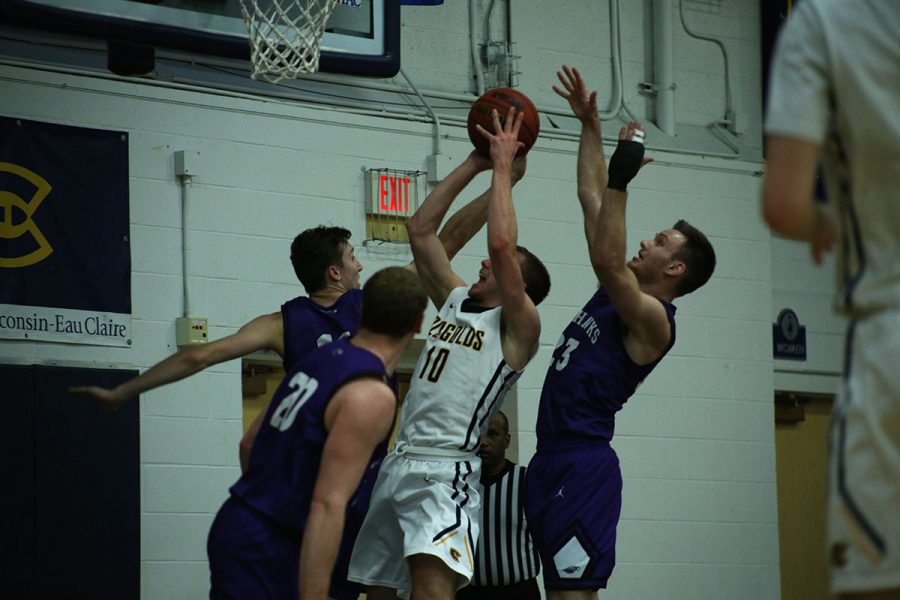 The UW-Eau Claire’s men’s basketball team knocked off UW-Whitewater on Saturday evening with a final score of 78-74. This win completed the Blugolds’ season sweep of the Warhawks, with the series finishing 2-0.

However, the first half was all Warhawks as UW-Whitewater shot 62.5 percent from three-point range. Their numbers from the field were about equal as they converted on 60 percent of their overall attempts. This allowed UW-Whitewater to extend their lead to 10 points by the halftime break.

The Blugolds flipped the script in the second half, outscoring the Warhawks 40-26 en route to the victory. Widdes continued his big night by finishing with 26 points, a career-high mark. The defensive intensity was raised as well as the Blugolds cut the Warhawks shooting numbers drastically. The Warhawks could only muster 30.8 percent shooting from the field and 12.5 percent shooting from behind the arc. Sachs was held to just two points in the second half.

With many positives to talk about following the win, Head Coach Matt Siverling wanted to make sure that Widdes would get the recognition he deserves first and foremost.

“Ben puts in a lot of time,” Siverling said. “He works very hard on his game. What really helped on Saturday was that he was hitting the three-point shot. He has that ability and we have been trying to get him to shoot it more often.”

Another player Siverling noted as being vital to the team was Blake Wacholz, a third-year guard. When asked about Wacholz’ increasing amount of playing time, Siverling was complimentary.

“Last year he wasn’t playing much because he was just a sophomore, but now he has done his time,” Siverling said. “He’s ready and he brings us a defensive spark. He also makes plays on offense which opens things up for us.”

Wacholz’ defense was on display Saturday as he had two key steals.

“Defense is something I’ve always taken pride in,” Wacholz said. “I know I’m not a guy who is going to score 20 points a night, so this is the way I can help my team win games.”

Widdes’ and Wacholz’ big performances came at a good time because, until Saturday night, the Blugolds had lost five of their past six games. Siverling says the team continues to remain confident despite the recent downturn. He says they believe they can be a threat come the conference tournament.

For the Blugolds, Cole Rabedeaux, a third-year guard, chipped in 19 points and six rebounds in the win. Cam Kuepers, a second-year guard also made a big contribution with 10 points, including a three-pointer with 16 seconds remaining up by four.

The Warhawks were led by Melvin Brown Jr., a fourth-year forward, who had 19 points. Off the bench, Andre Brown, a fourth-year guard, had a near double-double with 15 points and nine rebounds.