A look into the UWEC Curling Club 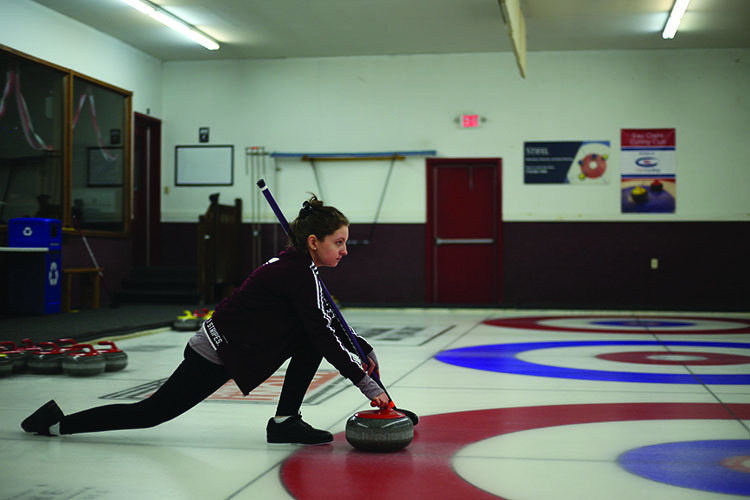 Andrea Wendt, a fourth-year student at UW-Eau Claire, demonstrates how to throw a rock in curling.

When thinking of the Midwest, a lot things probably come to mind, such as cornfields, cold winters and nice personalities. But what about curling?

For a lot of people, curling probably isn’t associated with the Midwest, but Minnesota and Wisconsin have more than double the number of curling clubs compared to any other state, with 27 and 28 clubs, respectively. What’s more is that every member of the 2018 gold medal-winning U.S. Men’s Olympic curling team are from Minnesota or Wisconsin.

Curling may not be well known to a lot of people, but for some, like UW-Eau Claire students Andrea Wendt and Alyson Wiedenbeck, it’s their passion.

Wendt and Wiedenbeck, both fourth-year UW-Eau Claire students, are co-founders of the UWEC Curling Club.

The club practices at Eau Claire Curling Club, which was established in 1876 and is one of the oldest facilities in the city, located at 5530 Fairview Dr. The club hosts various leagues, including a youth league that Wendt and Wiedenbeck help teach, competitive leagues and the UWEC Curling Club.

Wiedenbeck, the president and co-founder of the club, has been curling for more ten years now. She came to Eau Claire as a first-year student hoping to join a curling team, but was disappointed to hear that they didn’t have one.

She wasn’t the only one who was hungry to curl, though.

Jenna Burchesky, a Team U.S.A. Olympic curler and an incoming first-year student at UW-Eau Claire at the time, like Wiedenbeck, was also looking for a team. They came together and slowly started recruiting other curlers, including Wendt, and eventually formed a team in March 2016.

The club is still in its beginning stages.

It’s completely student-run, and those with curling experience are encouraged to help teach.

“We have over 100 names on the email list,” Wendt said. “Sometimes we get 15 to 20 people, sometimes we get three or four. But we’re always getting new faces.”

The club practices every Saturday from 4 to 6 p.m. There are no formal matches with other teams. The members just come in and curl for the love of the game.

“It’s a fun atmosphere here, we just come and have a good time curling,” Wendt said. “Other leagues get more competitive, but we focus more on learning and the experience.”

Many people see curling every four years during the winter Olympics, but don’t really know how it works. Wendt explains it and reveals it’s not very complicated.

There are four players on a team, and each player throws two “rocks,”which are the stones that slide on the ice. The captain, or “skip,” calls the shots and is usually the brains behind the team.

“Curling is a game of strategy more than anything, hence why it’s sometimes called ‘chess on ice,’” Wendt said.

Two sweepers sweep the ice in front of the stone to help guide the path of the stone to the desired spot. The goal is to get the rocks as close to the center as possible. The circles around the center aren’t worth any points, which is a common misconception.

“Whoever is closest to the exact center gets a point,” Wendt explained. “And however many rocks are closest, that’s how many points you get. So only one team can score per end, and none of the rings have point values.”

There are eight “ends,” or rounds, per match. Whoever has more points at the end of the game wins.

Curlers are very passionate and love the game they play. Wiedenbeck compares it to “stepping into our Narnia.”

“Just give it a try,” Wendt said. “You might get hooked, that’s what happened to me.”

One of the best things to happen to curling in recent years, Wiedenbeck said, is the first ever U.S. Men’s Olympic gold medal win against Sweden. All members from the team are either from Minnesota or Wisconsin. Wiedenbeck explains that it’s just as big of a deal locally.

“Imagine all of the people who see curling on the Olympics every four years and think, ‘that looks awesome,’” Wiedenbeck said. “Imagine all the Google searches. On the local level it blows up. It inspires people to get out and curl.”