After participating in this meet for many years, Blugolds say this one stands out 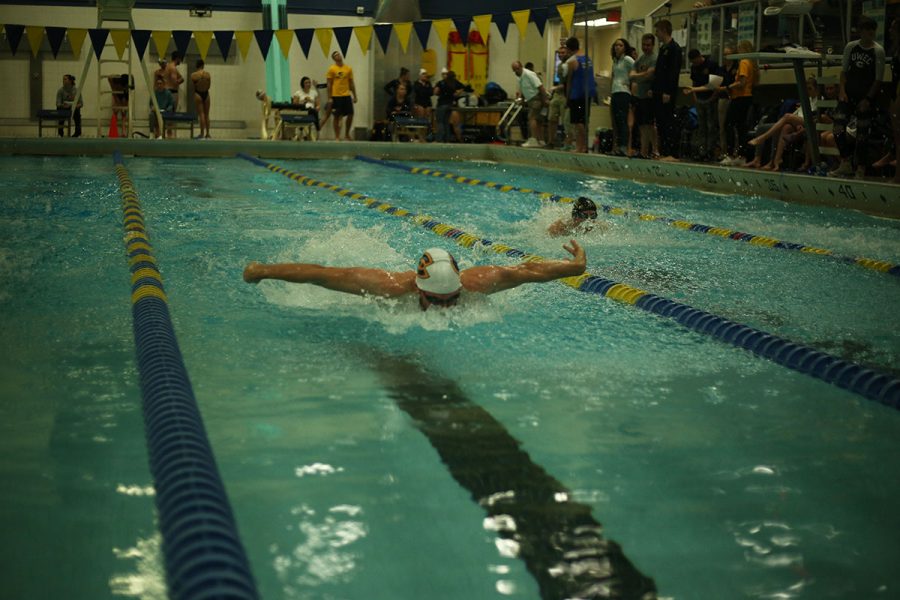 The swimming and diving teams were tapered and rested over a week before their meet in Rochester this past weekend, which allowed them to improve their speed and times in the water. This photo, from our files, captures a home meet earlier this year.

Blugolds on the UW-Eau Claire men’s and women’s swimming and diving teams competed in the Rochester Invitational this past weekend. The men’s team finished third out of nine teams and the women’s team finished seventh out of 12 teams.

Annie Ryder, the head coach for the swimming and diving team, said she was very happy with the group’s results. She said they have been dedicated during practices and their performances at this past meet stood out from previous years.

“They’ve been working incredibly hard this semester and we’ve been practicing a lot with … how we’ve been racing in duel meets and that kinda came together,” Ryder said. “For this meet, I think it’s probably the fastest we’ve ever been at mid-season.”

At this mid-season benchmark, Ryder said this meet is also unique because it is a preliminary final meet. Athletes are tapered beforehand with the expectation that their races will improve among the competing Division II and Division III teams. Ryder said swimmers and divers are rested for about ten days before the meet.

“We’ve got a little rest going into the meet with the hope that they will swim fast, which they did,” Ryder said. “We don’t do a lot of prelim final meets during the season, we typically just do dual meets.”

It was evident that tapering paid off with the standout performances that took place on the women’s side. Rachel Streit, Kate Stensberg, Paige Pelikan and Anna Theisen placed 12th in the 800-yard freestyle relay with a time of 8:01.66.

Additionally, on the men’s side, Michael Bylander, Collin Miller, Conner Pendill and Caleb Odmark placed fifth in the 400-yard medley relay with a time of 3:31.17.

Theisen, who is a third-year nursing student, said this meet stood out to her because she was able to achieve a goal that she has had since she joined the team as a first-year student.

“I was able to go under 18 minutes in my mile, which is what I’ve been wanting to go since my freshman year,” Theisen said.

Odmark, a fourth-year biochemistry student, said the relational aspect of the team improves at this meet as well.

Theisen also recognized the support that teammates show each other at this meet and the feelings of camaraderie it produces.

“I know some of my teammate’s goals and what they want to go and when you see them achieve that, it’s … more fun than you getting a best time yourself. … That’s just the best feeling.”

The swimming and diving teams’ next meet will take place Jan. 18 at UW-Stevens Point.