The imperfect, yet perfect, role model 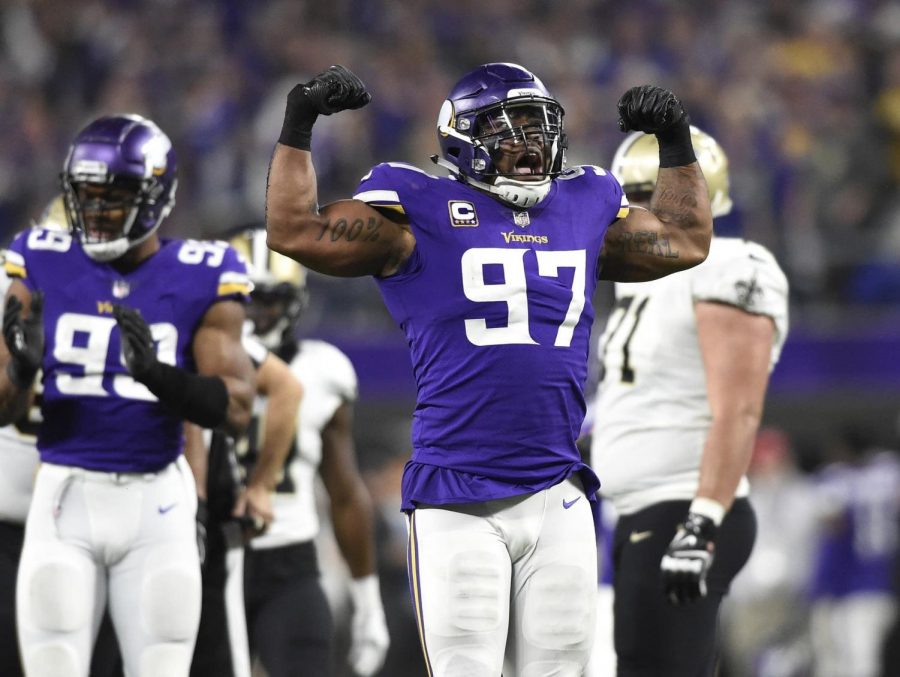 On Saturday, Sept. 22, Vikings defensive lineman Everson Griffen stumbled through the lobby of Hotel Ivy in Minneapolis. Disgruntled and presumably under the influence, Griffen engaged in a verbal altercation with members of the hotel staff and allegedly threatened to shoot one of the staff members.

This was arguably the best thing that has ever happened to Griffen.

The event at the hotel uncovered a long history of struggles with mental health for Griffen, something he has had difficulty with since his childhood. Later that week Griffen checked himself into a local hospital, and he and his family decided it was best for him to step away from the team while evaluating his mental health.

Society portrays professional football players as macho and tough, and this doesn’t fit the stereotypical profile of someone affected by mental illness. People with mental illnesses are viewed as mentally weak and fragile by people who do not understand it. Both portrayals are inaccurate.

Without using any words, Griffen told football fans across America that it’s perfectly normal to not be okay all the time — even for tough football players. He illustrated that mental health is just as important as physical health. He showed that even a multi-millionaire professional athlete deals with daily depression and suicidal thoughts just like a large percentage of the American population.

On Sept. 27, Griffen took to Instagram to elaborate on the situation.

“I am currently focused on resolving personal issues with which I have been dealing with for a long time,” Griffen said on Instagram. “Once I have had time to address those issues, I hope to share my story with everyone.”

Although Griffen’s decision to focus on his mental health probably angered some fans, the way the Vikings organization and the fanbase handled the situation was extremely impressive. The Vikings put no pressure on Griffen to return prematurely despite the fact he was still under contract making the same amount of money. Instead of bashing one of their best defensive players who didn’t have any physical ailments, fans showed tremendous support for Griffen over social media, sending him encouraging messages online.

In his first game back on Oct. 28 against the New Orleans Saints, Griffen didn’t turn heads in any statistical categories, but his presence as a leader was apparent, and he certainly had a positive effect on the game.

“My number one goal is just to keep on going out there and knocking the rust off more and more each day,” Griffen said.

Griffen is a role model for anyone struggling with mental illness. He made bad decisions while in his lowest state, clearly not being in full control of his actions. He sought out help immediately after his visible struggle when he could have continued playing football while his mental health spiraled.

The first step in improving mental health is to spread awareness on the subject. Griffen has done this effectively because of his platform as a professional athlete and his prominence as a top defensive linemen in the NFL. Hopefully Griffen’s willingness to seek psychiatric care will inspire others who have a mental illness and struggle with it to do the same.

Griffen’s actions in Hotel Ivy were clearly wrong, but if these were the actions that forced him to finally seek out help, then this incident was the best thing that’s ever happened to him.