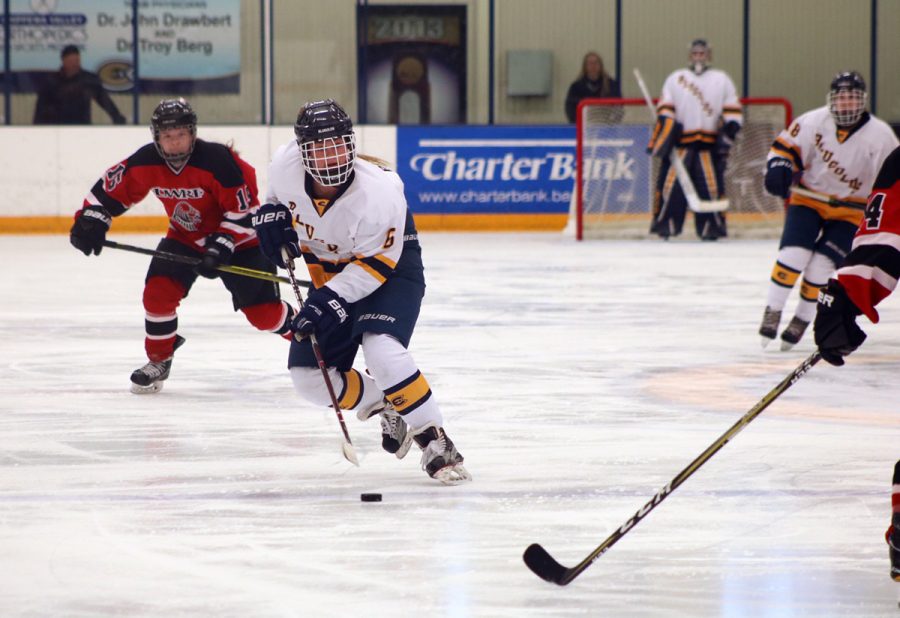 The Blugolds, ranked tenth in the conference, lost to the No. 7 Falcons with a final score of 1-2.

The UW-Eau Claire women’s hockey team gave up a win to UW-River Falls Saturday in a close match, falling to the Falcons 1-2.

Both teams were firing shots and keeping the goalies busy in the first period, but the Falcons were able to sneak one past Erin Connolly, third-year goalie. However, the Blugolds came out of the first period with more shots than the Falcons.

The Blugolds kept up that momentum into the second period. Hannah Zavoral, second-year forward, took the puck down the ice and scored only 20 seconds into the period, tallying her fourth goal for the season.

“They just hit me with their shot and I looked up and nobody was in front of me, and so I was like ‘OK, I’ll go score,’” Zavoral said.

The Falcons answered Zavoral’s goal a few minutes later, breaking the tie and ultimately determining the final score, as neither team scored in the third period.

Neither team scored during their power plays in the game. The Falcons gave up five penalties, allowing the Blugolds 10 minutes of power play time. The Blugolds gave the Falcons only four.

“We had a lot of opportunities with our special teams today,” Head Coach Erik Strand said. “We had some great looks, but just couldn’t solve their goalie.”

The Blugolds did, however, play the last minute and 41 seconds with an open net, ending the game playing six on five, but still coming up short. The final score for the Blugolds was 1-2.

“Every game we go into playing a WIAC opponent, we want to make the most of it. I guess it’s just kind of feeling out the emotions from last year,” Connolly said, referring to the teams’ meeting last February.

The Blugolds beat out the Falcons to head to the WIAC Championship Tournament in double overtime, so the stakes and emotions were high last year, Connolly said.

The Blugolds and the Falcons are set to meet two more times before the WIAC tournament, and Strand is eager for their next matchup.

“You’ve got two proud Wisconsin state schools, one with tremendous amount of tradition and one that’s hungry to build that tradition,” Strand said. “Both teams have to be on both nights. If one team is off, the other one is capable of running the other team out of the building.”

The Blugolds are set to play again Tuesday, hosting St. Mary’s University of Minnesota at Hobbs Ice Arena. They will see the Falcons again Feb. 9 and 16 for the last two games of the regular season.