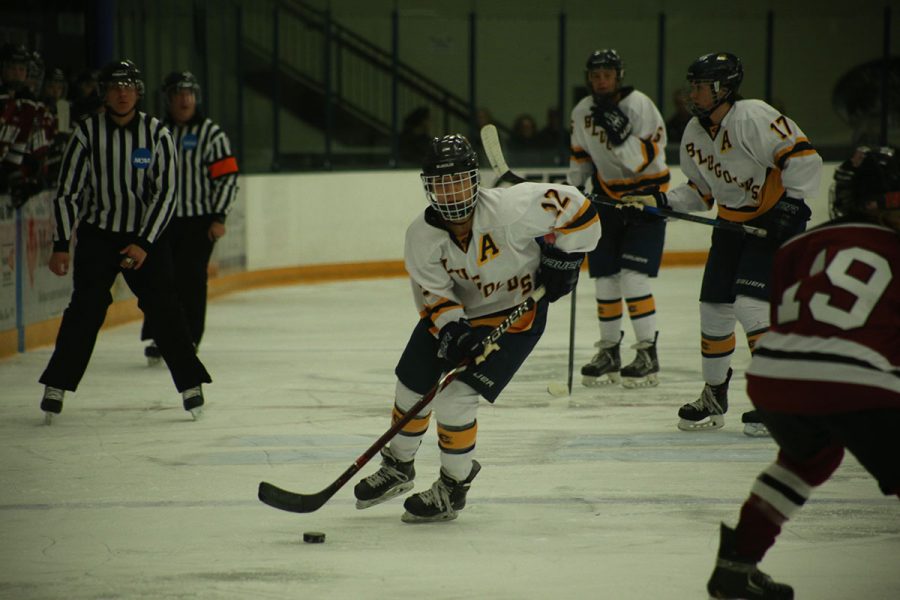 After two games over the weekend, the UW-Eau Claire women’s hockey team now has a 1-1 record. They’ll hit home ice again at 7 p.m. on Friday.

The UW-Eau Claire women’s hockey team opened their season Saturday at Hobbs Ice Arena, where the Blugolds hosted the Hamline University Pipers. The Blugolds fell to the Pipers 5-4.

UW-Eau Claire gave up four powerplay goals in a row to the Pipers. After the second intermission however, the Blugolds bounced back.

With only 58 seconds left in the game, Turnbull took advantage of the powerplay and scored again, closing the gap and making the score 4-4.

Hamline University came back only seconds later, breaking the tie and establishing the final score, a 5-4 Piper win.

However, the Blugolds were not discouraged. Zavoral said she was proud of the team for not giving up, despite being four goals down at the beginning of the third.

Head Coach Erik Strand said the coaching staff challenged the team to keep up the hustle during the second intermission.

“As a staff, we challenged them to just win the third period, which we did,” Strand said. “Their resolve and their battle — we’re happy with that.”

Lexi Wilson, a fourth-year forward, said the game started off slow, but that there was not a lack of effort or energy.

“Our communication was in; our effort was in,” Wilson said. “We just couldn’t get past their goalie at first. Something we can improve on is starting from the puck drop and just making sure we play a full 60.”

The Blugolds did just that on Sunday when they hit the road to take on the Marian University Sabres in Fond Du Lac. The Blugolds were able to rebound from their loss the previous day and came out with an 8-0 win. Erin Connolly, a third-year goalkeeper, earned her first shutout of the year with 18 recorded saves.

The Blugolds came out of the first period on Sunday with five goals, followed by one point in the second and two in the third.

The Blugolds play Bethel University at 7 p.m. on Friday at Hobbs Ice Arena. Friday is the first of five home games in a row.