Members explain the passion that keeps them involved in the sport 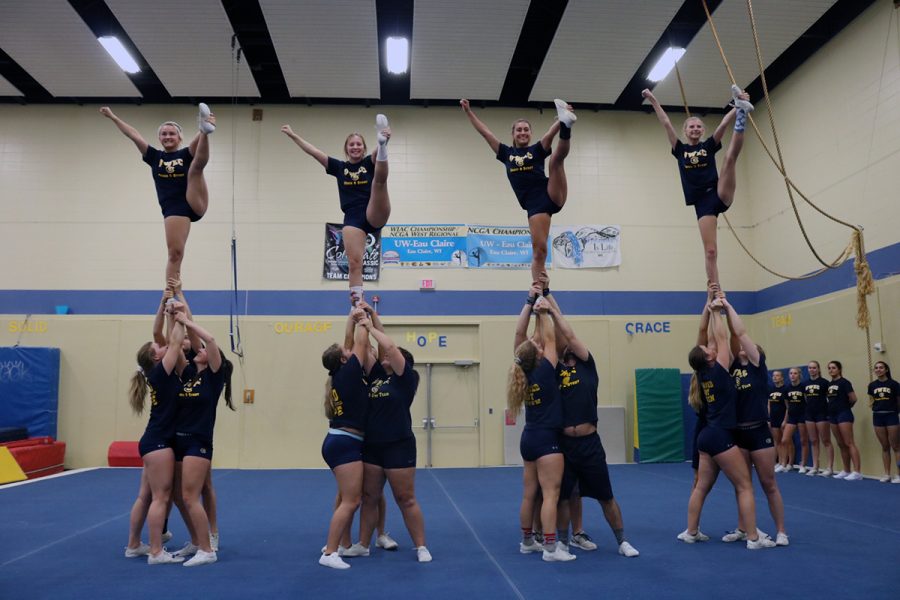 The cheer team rises to any occasion in need of a little pep.

From chanting in the student section bleachers at sporting events to volunteering at area run/walks, the Blugolds on the UW-Eau Claire cheer and stunt team soar through the air — and throughout the campus and community.

Sam Doller, a fourth-year computer science student and long standing member of the team, said they are a consistent source of support for on- and off-campus organizations.

“We’re constantly supporting,” Doller said. “We’re there at the football games, supporting the team, the basketball team, and such like that. We’re also really involved with the community. We do a lot of different things, like volunteer work. We do the Blugold Mile, we also do Relay For Life and we’ve done the Down Syndrome Walk in the past.”

Additionally, Britain Grainger, a fourth-year psychology student and the president of the team’s executive board, said the extent of the cheer and stunt team’s involvement — specifically on campus — makes them a dependent source of support as well.

“We’re very relied on, here at the university, to be the face (of the school) almost,” Grainger said.

Grainger said being a member of the team is a diligent experience. She said the UW-Eau Claire campus and surrounding community are indeed dependent on them, but every member of the cheer and stunt team are also reliant on one another.

“It is extremely challenging and hardworking,” Grainger said. “We have to work as a team and rely on each other and trust (each other) because if one person’s not here, nothing can hit, nothing can go. It’s a time commitment, and it’s a huge thing.”

She said that team practices take place on Sundays, Tuesdays and Thursdays and amount to nine hours or more of practice time each week. Grainger also said tryouts for the cheer and stunt team take place in September and May, but members stay active for a majority of the year.

“Our competition season starts in the November time frame,” Grainger said. “We do stuff all summer and then we get about a month break from April until May, basically, and then we start back up again, so it’s quite a commitment.”

Although the Blugolds on the cheer and stunt team are dedicated to activities, events, practices and competitions throughout the entire year, Scotty Van Der Haegen, who is a fifth-year history student, said he has remained passionate about the team since he joined in 2014.

“I didn’t cheer before college, and just one random night, one of my best friends at the time was like ‘Hey, try it out,’ and I was like ‘Sure, I got nothing better going on,’” Van Der Haegen said. “I walked in, and I loved it instantly and then I’ve been here since.”

Doller shared a similar story when she said she was involved with a team in high school and admired the UW-Eau Claire cheer and stunt team when she would see them at her high school team’s competitions.

“When I was in high school, I competed, and I went to a lot of competitions that the Blugolds were going to,” Doller said. “I remember just thinking, ‘I want to wear that uniform. I can’t wait to be on that team.’”

Van Der Haegen said the UW-Eau Claire cheer and stunt team is a great organization for students because the team provides a home-like environment.

“For the people on the team, it gives them a home and just a way to make friends,” Van Der Haegen said. “I knew virtually no one when I came here, except for my one friend, and then now I have best friends that I’ll have for the rest of my life.”