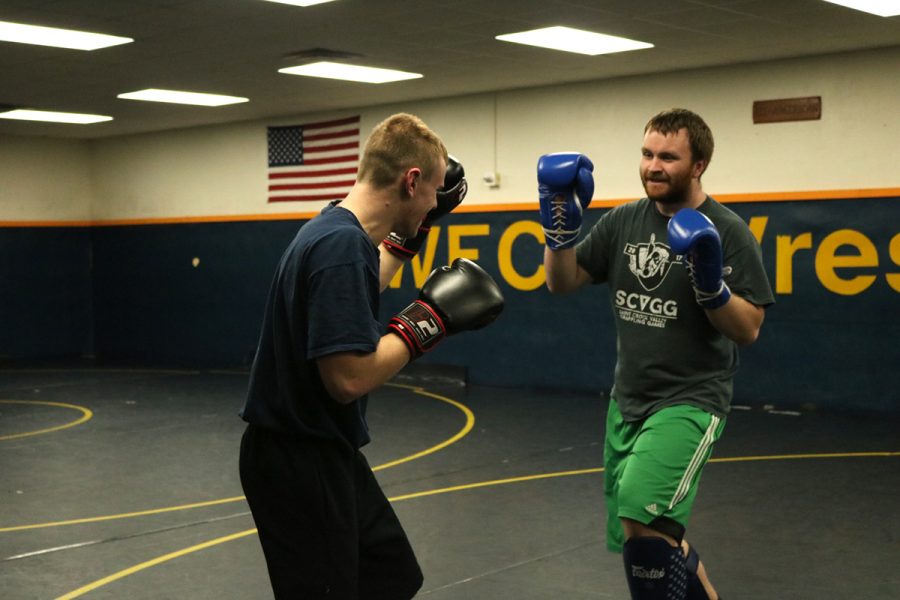 Levi Smith and Tanner Semb, members of the Mixed Martial Arts Club, practice their fighting moves on each other.

Tanner Semb used to watch superheroes in cartoons and movies, wishing to grow up to be just like them.

That is precisely why Semb, a third-year actuarial science student, started martial arts as a kid and later joined the UW-Eau Claire Mixed Martial Arts Club.

In practices, returning members teach every part of MMA: boxing, grappling, takedowns and submissions. The team has two structured practices a week and an open mat practice on Sundays where members can come in to work on skills. Fridays are focused on grappling and Brazilian jiu-jitsu, whereas Wednesdays are focused on striking.

Semb leads striking in practice, sharing with the less-experienced members how to kick, hit, block and fake out an opponent. He said his favorite part about being in the club is being able to teach new members.

“I’ve been doing this for a long time, so I like being able to show what I know to help others,” Semb said.

What the team teaches the most, according to Samson Gladis, a fourth-year communication science student, is how to be good at wrestling and submissions. Submissions are how one finishes a fight — a choke hold or a head lock. This keeps the opponent from being able to fight anymore, thus ending the fight.

Austin Kowarsch, a fifth-year business finance student, said he likes teaching and passing on what he knows to others so that they can learn to grow the sport. Most of the students who join the club have some martial arts or wrestling background, which, Kowarsch said, is a basic foundation. However, many members join with no experience.

Twice a year, the club attends and competes in the Saint Croix Valley Grappling Games tournament in Hudson. Not all members compete, but those who do attend do not lack support from the rest of the team. The members help each other prepare for competitions, support each other and even coach each other from the sidelines during competitions.

Kowarsch also said he enjoyed the individual aspect of the sport just as much as the team aspect.

“It’s just fun be a part of sport where it’s all on me,” Kowarsch said. “Whether I win or lose, I can just blame myself.”

With the amount of time spent in close proximity of each other, Gladis said the team is really close.