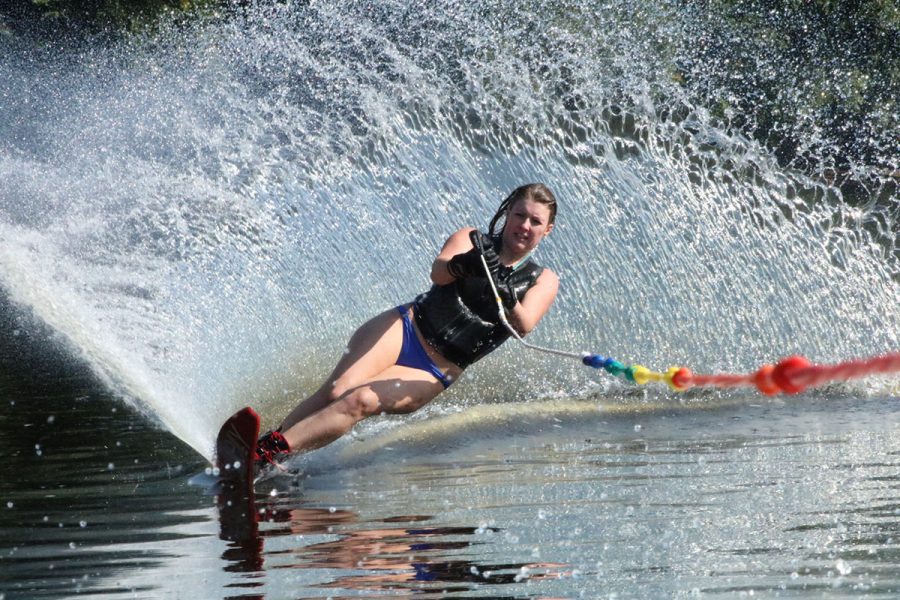 Roecker takes a hard cut outside the boat’s wake.

A typical Wisconsin summer is incomplete without bonfires, state and county fairs, complaining about the heat and spending some time on or near one of Wisconsin’s 15,000 lakes or 84,000 miles of rivers.

The UW-Eau Claire Water Ski and Wakeboard team, a club sport program on campus, takes a love of the water to the next level, staying out on the Chippewa River until the end of October.

Members of all skill levels are welcomed to the team. There are some extremely experienced members, like Autumn Roecker, a third-year human resource management student, who has been water-skiing since she was 3 years old.

There are other members who are not so experienced, like Phillip Barbian, a second-year actuarial science student, who has been water-skiing only a couple of times.

According to Roecker, the team participates in three tournaments. The largest of the three is the conference tournament, which is held by Iowa State University in Ames, Iowa. About 20 members of the team will participate. Members from all skill levels can compete.

“You’ll have people at tournaments who have been skiing for their whole life, and then you’ll have people who can’t even stand up,” Mueller said. “It’s really just about having fun and seeing what you can do.”

The team competes in trick, slalom and jump skiing at tournaments.

Generally when trick-skiing, beginners use two skis and work their way up to “dropping” a ski, or kicking off the second ski and continuing on only one. Advanced skiers are able to start using only one ski. From there, skiers perform a series of tricks.

Slalom is an event that involves skiers maneuvering their way through a course. This event is performed on one ski, which is different than a trick ski. Slalom skis are designed with one foot in front of the other and are much narrower than trick skis.

Jump skiing requires an athlete to go over a jump in order to gain distance.

“Since we come from all over, we all have different experiences,” said Hannah Van Steenbergh, a third-year biology pre-med student. “A lot of us have spent our summers on the water either by where we live or on a lake up north.”

Because they come from various areas in the Midwest, the skiers have differing opinions about whether lakes or rivers are better for skiing.

“The thing I like more about lakes is that there is no current to pull you around,” said Club President Tyler Mueller, who is a third-year finance student. “One thing that’s easier about skiing on a river versus in a lake, though, is that in a lake you have to make a lot of turnarounds. The river gives you more of a straightaway, but when you’re working on dropping a (trick) ski, you have to go back and find it. That’s when lakes are better.”

Even those who have been skiing for their entire lives can continue to learn new things, like how to compete in events.

Josie Lindstedt, a first-year nursing student, said she has been on the water for most of her life, though she is primarily a wakeboarder. She is learning more skills, such as trick skiing on only one ski.

“I just need to figure out how to balance once I get the second ski off,” Lindstedt said after an attempt at trick skiing during practice on Saturday.

While the team does compete, the members are more focused on growing their skills as a team. The members observe each other during practices and give feedback throughout practice.

“It’s about learning and having fun on the water more than anything,” Van Steenburgh said. “We want to share our love of skiing with everyone.”

The team will continue to ski and board on the Chippewa River until the end of October.

“We pretty much stay out as long as the weather will let us,” Roecker said.

The team will be compete at the conference tournament Sept. 21, 22 and 23 at Iowa State University in Ames, Iowa.