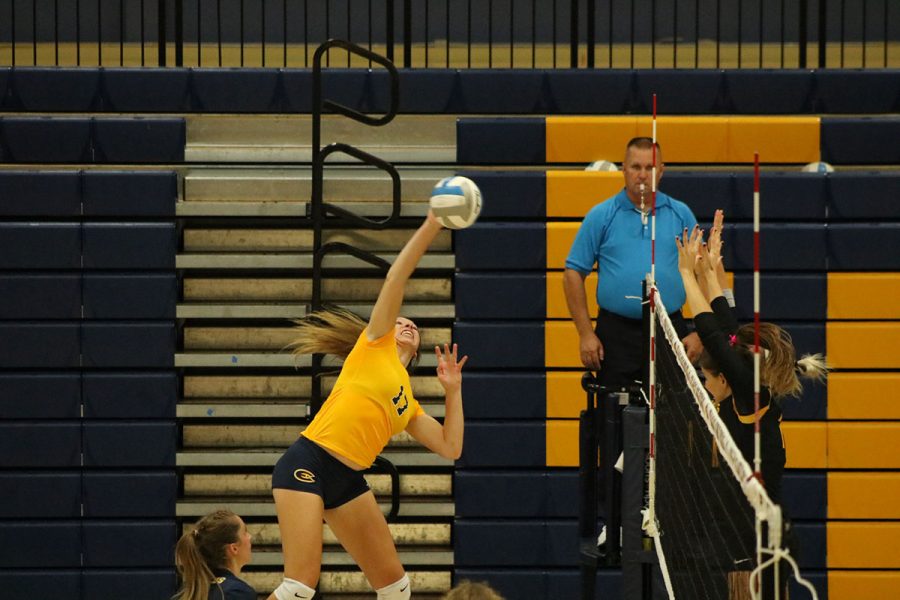 The UW-Eau Claire volleyball team added three wins to their previously 8-1 record in the Sandy Schumacher Memorial Tournament this past Friday and Saturday.

The team is starting the season off strong — they’re 11-1 overall and have a six-game winning streak. The Blugold women fought through five sets and won a match 3-2 on Friday, then won by sweeping both matches on Saturday.

“You know, it’s exciting to have a record that reflects the work that we have put in,” Kim Wudi, the head coach, said. “I think that’s part of it, but I think we still have a lot of growth ahead of us.”

In the first set on Friday, the teams were back and forth to start off, until the Blugolds went on to take a 19-11 lead and force a Gustavus timeout. Gustavus came out of the timeout to take another two points but the Blugolds took the set 25-18.

In the second set on Friday, Gustavus had an early lead, but Makenzie Bachmann, a second-year outside hitter, served up a few points for the Blugolds, propelling them into a 7-point run.

Gustavus fought hard but Libby Macken, a first-year, came off the bench to slam down three aces for the Blugolds. Bachmann made a kill from the Madison Surprise set to clinch this second set. The Blugolds took the set 25-19.

Despite losses in sets three and four, the Blugolds kept fighting and pulled out a 15-13 win in the decisive set.

On day two of the tournament, in the first game versus Concordia-Moorhead, the Blugold women utilized teamwork to take the win in three close-scoring sets, 25-20, 25-19 and 25-22.

Arianna Barrett, a first-year, and Krista Meyer, a second-year, both hitters, each ended the match with greater than .350 kill percentages.

“(For) me, personally, blocking has been such a huge emphasis on our season,” Meyer said. “And, as a middle, it’s my job to protect our defenders, so I really want to work harder to get more touches or load the block down a little more so we can convert it and score some more points.”

On the defensive end, Taylor Scalia, a second-year, and Amber Karn, a fourth-year, protected the back row and kept the gameplay alive with seven consecutive point runs of 3 or more.

In the second game of the day, the Blugolds swept Edgewood, 25-22, 25-20 and 26-24. The Blugolds were down late in the last set but rallied back with Abby Volk, a first-year, sending a tip over the Edgewood block. After an Edgewood timeout, the team’s winning fate was sealed when Madelyn Pashibin, a fourth-year, threw down a kill.

According to the weekend’s program, the tournament was a tribute to Sandy Schumacher. Schumacher was a founding member of the Wisconsin Women’s Intercollegiate Athletic Conference.

Schumacher was the one responsible for creating many Blugold athletic programs, such as the first volleyball and basketball camps for girls at UW-Eau Claire.

She was also the first volleyball and women’s basketball head coach. Additionally, she was the softball head coach and was influential in making it a varsity sport. Schumacher had a two-decade battle with cancer before passing away in 2012.

Schumacher did so much for women’s athletics at UW-Eau Claire, Meyer said. Head Coach Wudi came into the locker room before the game on Friday and told the team that women before them haven’t had the opportunities they have today.

Meyer also said it was important for the team to absorb Wudi’s words and use them as fuel to play their best.

During Schumacher’s lifetime, Wudi said, she battled for others and for her own health.

“She’s just a real hero to me and I get choked up just talking about her,” Wudi said. I miss her a lot. I wish I would have had the chance to see her coach because I think she would be an amazing coach to watch and learn from. I learned a lot in just the couple of years that I knew her.”