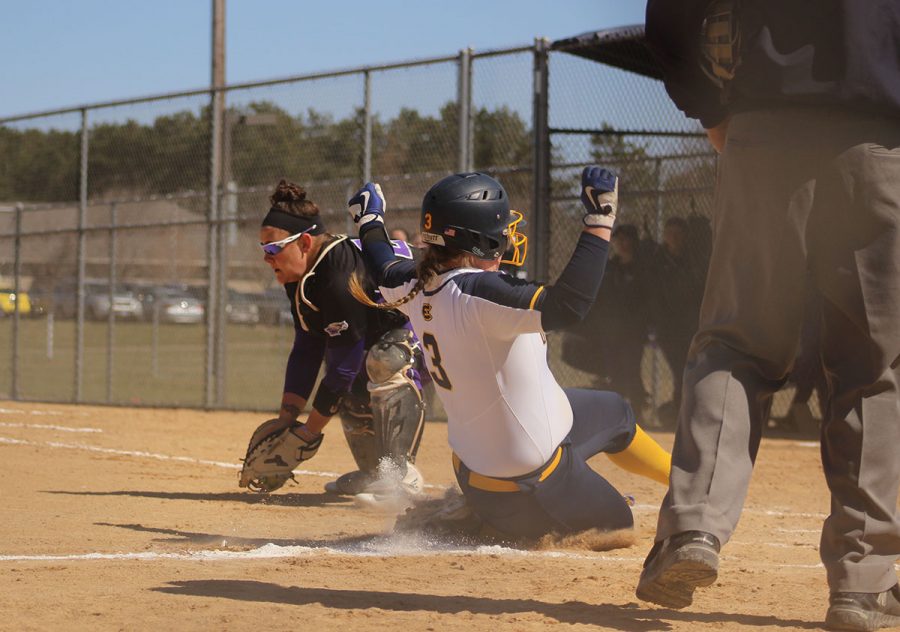 The Blugolds faced the UW-Whitewater Warhawks and the UW-Oshkosh Titans last weekend.

Blugolds softball had two doubleheaders this weekend. Their first two games were played on Saturday, April 28 on the road at UW-Whitewater. Their second doubleheader on Sunday, April 29 was against UW-Oshkosh. The Blugolds’ overall record in conference play is currently 6-6.

Saturday’s games turned out one win for the Blugolds. They prevented the Warhawks from crossing home plate and ended the game 2-0.

Sarah Peka, second-year pitcher, was a key player in the first game of the doubleheader as she allowed three hits and struck out six batters. UW-Eau Claire scored their two runs at the bottom of the second inning.

Abbey Place, first-year catcher and infielder, was the first to score a run for Eau Claire, and Darby Raffel, senior and outfielder, was close behind her to score the last run of the game.

“I knew if we came out of here with a split I would be happy with that,” coach Leslie Huntington said. “But after we got the first game I really thought we could get game two. We had really good pitching all day.”

The second game’s bottom of the first was beneficial to the Blugolds because they scored two runs. Gretchen Arneson, second-year catcher, scored the first. Immediately after Arneson, Katie Rongstad, second-year in/outfielder, scored as well. It would turn out, however, that these runs would be the only scored by Eau Claire for the remainder of the game.

The final game of the doubleheader ended with a loss for the Blugolds 6-2.

Going into the next day’s doubleheader, Blugolds softball coach Huntington was hopeful for another victory to give Eau Claire the chance to go on to the WIAC championship games.

“Expectations are to win, we know how important it is,” coach Huntington said.

Sunday’s first game saw Eau Claire start off strong with two runs in the bottom of the first.

In the top of the seventh, Erika Berry scored the final run of the game for the Titans. The game ended with a loss for the Blugolds and a score of 5-2. Though they were defeated, Eau Claire managed to out hit Oshkosh nine to eight.

The second game on Sunday saw another loss for Eau Claire as Oshkosh beat the Blugolds 8-5.

It wasn’t until the top of the fourth that either team was able to score a run. The first run of the game was scored by the Titans. Blugolds responded with a run in the bottom of the fifth. With the game tied going into the sixth inning, the Titans scored once more and secured the lead.

Eau Claire attempted to surpass the Titans during the bottom of the seventh. The Blugolds managed to score four runs throughout this inning. They however were still three runs short of victory. Oshkosh also succeeded in getting four runs during the top of the fourth.