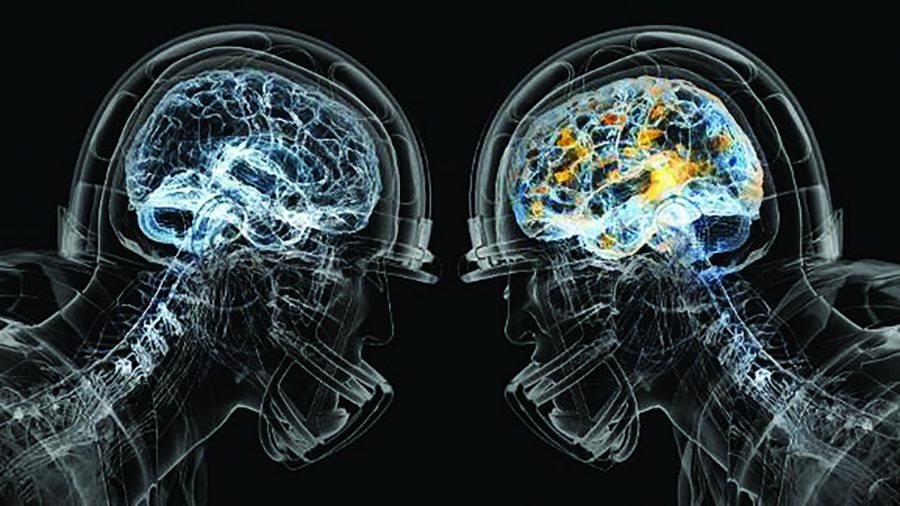 Traumatic brain injuries in NFL players has been linked to cause Chronic Traumatic Encephalopathy, known as CTE, which can only be located through autopsies and is correlated with numerous difficult neural problems.

It’s no surprise that professional NFL football players take on more than their fair share of injuries, but there’s one injury that traumatically affects them for the rest of their life and can also affect them dangerously in the short-term: head injuries.

A 2015 study found that in the autopsies of 202 former football players, 99 percent of those who had played in the NFL had Chronic Traumatic Encephalopathy, commonly known as CTE. This neurodegenerative disease is characterized by an increase in tau proteins that build up in neural pathways and cause blockage, resulting in a loss of memory, faulty judgement, aggression, depression, anxiety, impulsiveness, an onset of Parkinson’s Disease, eventual onset of dementia and suicidal behavior. This disease is found almost exclusively in athletes who have had repeated head traumas, such as concussions, and more than 100 former NFL players have been discovered to have had this horrible brain disorder.

From 2016 to 2017, there has been a 14 percent increase in the diagnosis of concussions among players. The NFL took swift action. In 2017, another rule was added that disallowed head-to-head hits without penalty.

According to the NFL Football Operations page, “the change prohibits forcible contact to the head or neck area or with the crown of the helmet. Once the receiver becomes a blocker, or assumes a blocking posture, he no longer has defenseless player protection.”

But, understanding that this is not enough to prevent the blows that cause concussions, the NFL and NFLPA recently mandated that six different types of helmets will not be allowed for new players, and they will be “phasing out” four other types of helmets, according to Michael Colangelo. This is due to the annual testing of the helmets worn by the players, which this past year tested 34 different helmets, which, according to the NFLPA, approximately 98 percent of the players use. The study only focused on how to have “reduced head impact severity.”

This means that even with all the tactics that the NFL is using to cover the problem of head injuries, they still can occur.

Many were concerned when rumors of the retirement of New England Patriots players Tom Brady, who is currently 40 years old, and Rob Gronkowski, aged 28, surfaced.

Both have cited concerns other than concussions, but the potentially early retirement of Gronkowski raises eyebrows about the health of the younger NFL players, and the damage done to the older ones, such as Brady.

With the NFL Draft this week, it poses some difficult questions about who we are subjecting to the dangers of playing football, and who will leave because of those injuries.

Considering the importance of the brain in literally everything, it is crucial for the NFL to make these decisions to protect their players and encourage them to practice safe play. Although taking many necessary precautions, the NFL is only thinking of the logistics.

The players are still trained to be aggressive until they win, and this can lead to the types of injuries that later cause CTE and damage the mental capabilities of players dramatically. It’s important for the NFL to take into account the culture of football and of aggressive play, and to promote safe football rather than spectator football. Because as much as America loves its good game, it’s important to also place value on the players’ wellbeing.