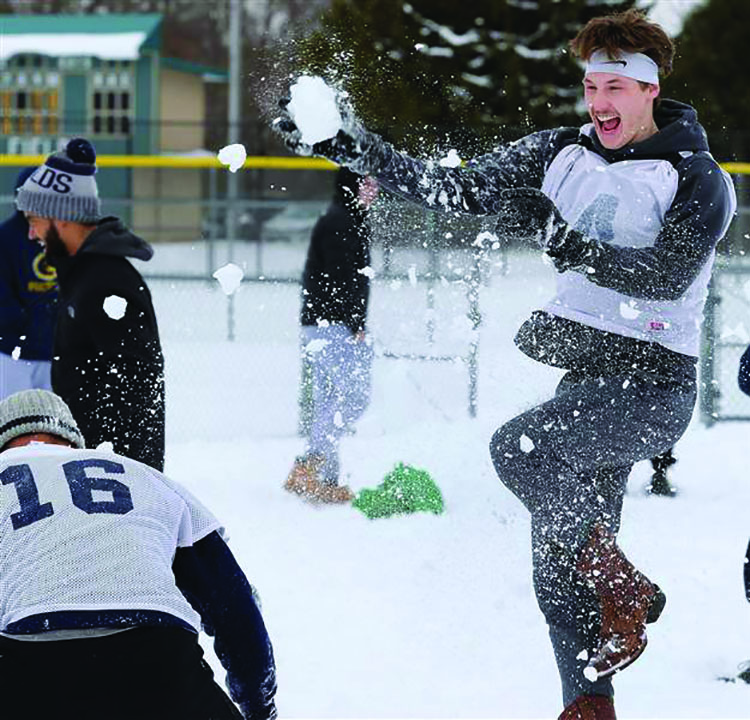 After multiple cancelled practices due to the inclement weather, the Blugolds decided to embrace the snow with some fun.

The first day of spring was over a month ago, but you couldn’t tell walking the field of Carson Park after a foot of snow hit the area last week. Instead of sunshine and warm weather for the start of April, it was more snow flurries and cold.

The unfortunate weather not only put a damper on spring, but also the 15 practice mini-season the UW-Eau Claire football team takes part in, also known as spring ball.

Along with an offseason lifting and conditioning program that runs from January to May, the Blugolds practice three times a week (when on schedule) in preparation for the fall. However, the recent weather had something else to say about that.

Head coach Dan Larson had to make the tough decision of cancelling six practices over the last two weeks due to the playing fields at Carson Park being covered in snow.

“Normally, we’d like to be able to have a set Monday, Wednesday, Friday practice schedule so our players can know what’s coming at them from a class and work schedule standpoint,” Larson said. “We’d like to get that schedule set and adhere to it the best we can but the weather obviously has not cooperated with us.”

Because Division III football programs are allowed a maximum a 15 spring practices, cancellations cause rescheduled practices to be closer together and possibly fall on days that conflict with other obligations.

The workload of multiple practices in a row because of cancellations, lifts, meetings, school and other activities makes things difficult on the athletes, Brian Kulaga, a junior running back, said.

“Initially we wanted to start spring ball off with three practices a week with breaks in between so we wouldn’t be burned out,” Kulaga said. “We’ve had to cancel a lot of practices and so now we’re getting into practices almost every day to fit in what we need to and it’s tough.”

To offset some of the lull that came with a long stretch without practices, the Blugolds took the field of Carson Park for a bit of a more light-hearted reason last Monday. With the field covered in over a foot of snow, the Blugolds held their own Snow Bowl. The team was divided into six smaller teams and rounds of ultimate football ensued.

“At some point in time, you just have to throw your hands up and say ‘we have to go have a little fun with it,’” Larson said.

Dressed in winter coats and boots, Blugold football players ran (the best they could) and dove in the snow in child-like bliss. While football is taken very seriously in the program, Larson said being able to get that feeling of your 12-year-old-self just playing football with friends in the snow is a good reminder of why they love the sport.

Larson said it was assistant coach Michael McHugh’s idea for the snow bowl and while it was a peculiar tactic, the goal of fun and the feeling of youthfulness were achieved.

“It was the most fun I had in a while compared to just lifting and doing specific football activities,” Kulaga said. “Running around with the guys, and pretty much being a little kid again playing in the snow was really fun and a great team thing.”

The snow bowl was also indicative of a much more close-knit group, Larson said, a promising aspect of a program that has won only three games the last two years. Seeing his players make a collective transition to the understanding of the concept of ‘me’ rather than ‘we’ has been the most exciting aspect of the young spring ball to Larson.

Now in the third year of the Dan Larson era, cheering guys on and hearing hooting and hollering during practices is not something that has always existed in the past but is now a regular occurrence. Those are the type of things that need to happen if the Blugolds want to reverse their recent history of losing, Larson said.

“This has been one of the first springs where I have truly felt like every guy on the field was all there for the right reasons,” Larson said. “Guys aren’t there just because they’re hoping to start next fall, they’re there because they want to be a part of this program.”

As a team that hasn’t had winning be a part of their culture in the recent past, Larson is confident his team has taken steps in the right direction. With the weather finally starting to look a bit more like spring, the Blugolds have a foundation set to turn their program around come September.

Editors Note: Scott Procter is a member of the Blugold football team