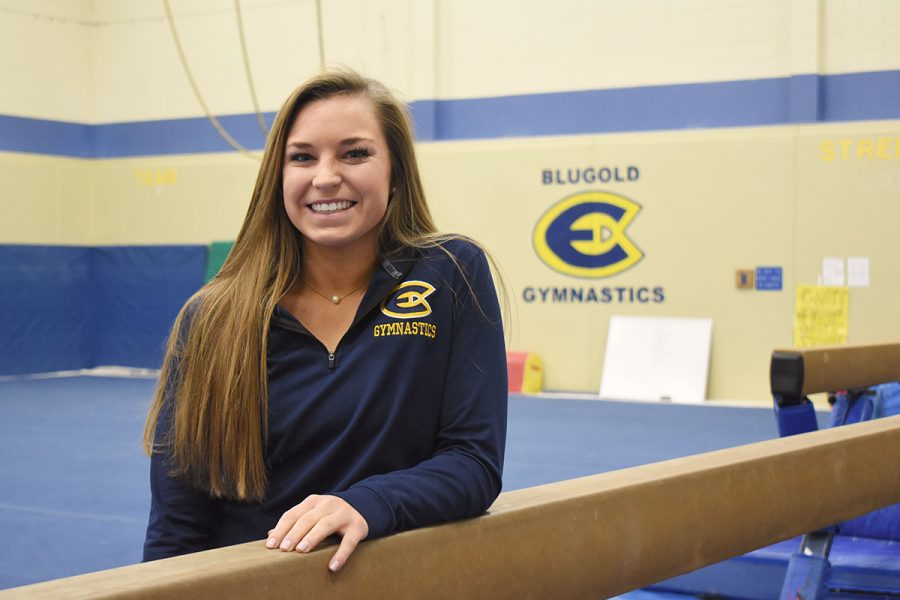 Erickson said she chose gymnastics over dance at the age of three and she has stuck with it since.

Tori Erickson’s gymnastics career began at the age of three, when she took pre-kindergarten classes. Eventually, she said, she had to choose between gymnastics and dance and decided to stick with gymnastics.

This year, Erickson will be graduating from the nursing program at UW-Eau Claire having earned high honors in her collegiate gymnastics career.

Throughout her time as a Blugold athlete, Erickson earned All-American in all-around, vault (2nd team), floor (2nd team) and balance beam (2nd team) according to blugolds.com. She also has taken the top four scores in the all-around UW-Eau Claire gymnastics records, her highest being 38.400. She was named National Collegiate Athletic Association (NCAA) gymnast of the year for the west DIII region this year.

Erickson said she was happy to also have broken a personal and school record (9.725) on vault at last weekend’s NCAA DI Regionals at the University of Minnesota. She had been unable to stick the landing on her vault routine all season until regionals.

At the National Championship this year, Erickson also not only earned All-American honors for her performance on vault and all-around but also took home the Academic All-American team honors alongside Destiny Cobbs, Becca Wilcox, and Malyssa Krajco, all seniors.

Erickson, who graduated from Woodbury High School where she participated in club gymnastics, said she felt very supported by high school and college teammates and family last weekend at regionals.

“All my fans were there,” Erickson said, “(and) it was just a really cool experience to get the DI atmosphere which I have always watched from the outside but it was very different being on the inside.”

It is a rare occurrence for a DIII gymnast to go to DI regionals, gymnastics co-head coach Danielle Schulzetenberg said.

“We knew she’d do well, but we didn’t know she’d have one of the best meets of her career,” Schulzetenberg said. “It was so fun to watch her take it all in and take the moment in and just rise to the occasion.”

This is the most confident Schulzetenberg has ever seen Erickson, she said, and is certain her confidence level is a result of a complete change of mindset Erickson experienced this season.

“Instead of putting the pressure on herself that she has to do good, she kind of just turned gymnastics into fun,” Schulzetenberg said.

Erickson said she felt really good about her last season as a Blugold and gained inspiration from her teammates to stay diligent in her work as an athlete.

Fellow teammate Cobbs said she believes Erickson deserves the honors, as she is a true and hardworking student athlete.

“Tori puts a lot of time and effort into her school work and is very passionate about her major (nursing),” Cobbs said, “She works hard in the gym, she is always at practice, completing assignments on each event.”

The biggest struggle Erickson said she faced as a student athlete was balancing her time between the gym, schoolwork, and her social life. Sometimes she would have to choose to prioritize school over friends to maintain her high GPA.

Throughout college, Erickson led a bible study with her teammates and Cobbs said she believes it impacted the team on a personal level, creating a bond that goes beyond gymnastics.

“For me personally, Tori has always been someone I can go to to talk about anything that’s going on in my life,” Cobbs said.

The team’s supportive environment is not only experienced by the athletes, it is noticed by the coaches.

“This team does nothing but support each other. There’s nothing but love. Everybody says their team is like a family, but this team really is one big family,” co-head coach Schulzetenberg said.

Eau Claire has given Erickson the experience and camaraderie she wanted in college, she said, and could not have asked for a better school to compete for during her college career.

Cobbs said Erickson has been a big part of the team’s experience at Eau Claire because of the positive energy and caring attitude she brings to the practices and meets.

Looking back on the season, Erickson said the team continued to improve throughout.

“We went on a build, so we kept getting better and better, and ended up with a season high at regionals,” Erickson said. “I thought that was a really good way to go out. I feel that next year they have a lot of potential with moving on to nationals as a team.”

Erickson’s plans after graduation in May include moving back to Minnesota and begin working in the cities.