Does the Rooney Rule work?

The Rule Rooney has failed to create a more diverse league 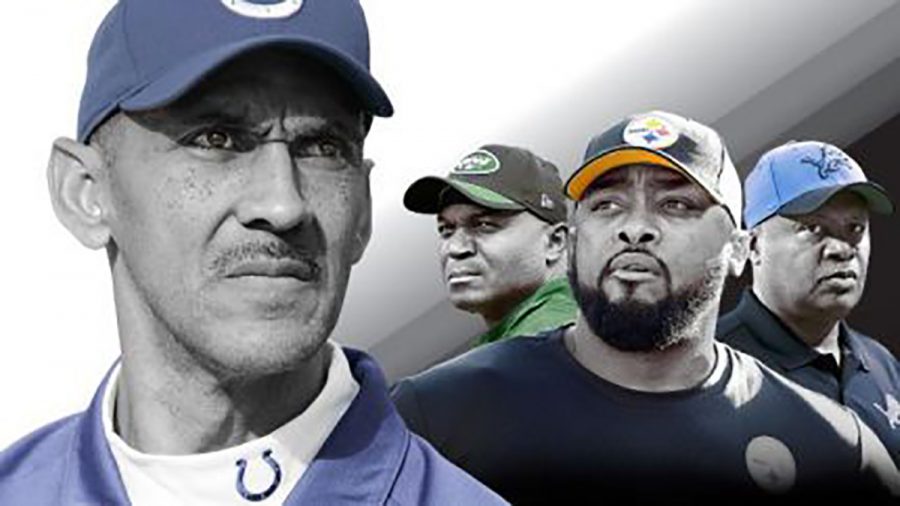 Tony Dungy, Mike Tomlin and Todd Bowles have been a few of the minority coaches in the NFL since 2003.

In 2003, when the “Rooney Rule” was implemented by the National Football League (NFL), there were only three minority head coaches of the possible 32 teams in the league, according to Business Insider.

In 2006, that number jumped to seven and floated around it for the next few years. Then —  in 2013 — it dropped down to three, the lowest since the rule was introduced. 2017 offered a bright glimpse for minority coaches: Eight coaches were minority, the highest amount ever. One minority coach was hired this offseason — Steve Wilks by the Arizona Cardinals — despite seven teams looking for new head coaches, according to ESPN. The Rooney Rule, which mandates all teams to interview a minority coach for either a head coaching position or an executive position, seemingly has not worked.

The Fritz Pollard Alliance (FPA), a group that works closely with the NFL to ensure equal job opportunities for minority coaches, is seeking to reform the rule after the NFL said the Oakland Raiders complied with the Rooney Rule following the hiring of head coach John Gruden, according to the Washington Post.

The Raiders, who hired Gruden after they fired Jack Del Rio, interviewed their tight end’s coach Bobby Johnson and University of Southern California Coordinator Tee Martin to comply with the mandate, according to USA Today.

By the rule, they had complied, but according to USA Today, Raiders owner Mark Davis had already agreed to a deal with Gruden a week before Del Rio was fired. If this is true, it was unfair and meaningless to interview the other two candidates. Martin and Johnson never had a fair chance at the head coaching job and were not legitimate interviews.

The FPA challenged the NFL to punish the Raiders for allegedly violating the rule, but the NFL concluded the Raiders did not violate the rule, according to ESPN. John Wooten, the chairman of the FPA, disagreed with the NFL’s ruling and said the facts are against the Raiders and owner Mark Davis “failed to fulfill his obligation” to promote diversity.

The Rooney Rule is a rule created for equity. It gives all coaches a fair chance at success in the NFL and allows every coach to work toward their dream of being a head coach. This rule, which is scrutinized every year by the NFL and the FPA, is not working for minority coaches.

The Cleveland Browns did pretty much the same thing the Raiders did when they hired John Dorsey as their new general manager. Jimmy Haslam, the team owner, fired one of the few minority general managers in the league and hired Dorsey just a few days later, according to Sporting News. Wooten also criticized the Browns hiring, saying he was “livid” with the Browns for ignoring the work everyone does to make the “Rooney Rule meaningful.”

The Browns and Raiders are not the only teams under scrutiny from the FPA. The Baltimore Ravens have already chosen their replacement for General Manager Ozzie Newsome, who will retire following the 2018 season, according to The Baltimore Sun. After reviewing the situation, the FPA determined the Ravens did not violate the Rooney Rule because the rule doesn’t apply to succession plans.

A rule which was created for equal opportunity has failed many minority coaches from a real chance at a head coaching job. Teams consistently interview minority coaches only to satisfy the rule and don’t take these coaches seriously.

The rule is good, the process is not. It needs to change if the NFL wants real change among coaches and general managers to create a more diverse league.