UW-Whitewater’s fast start too much 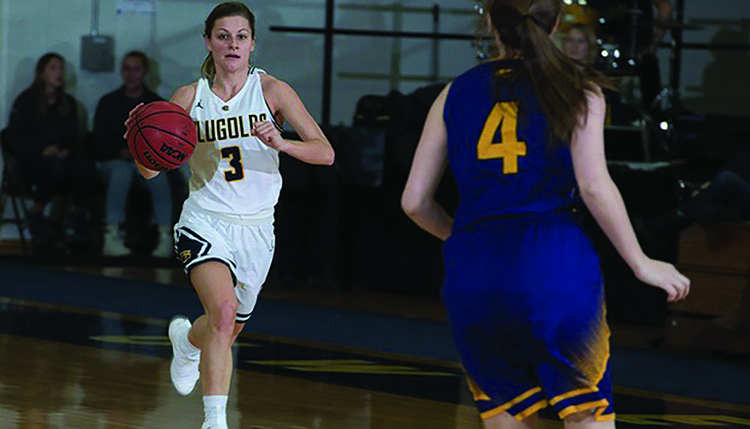 UW-Eau Claire women’s basketball faced UW-Whitewater last Thursday ending in a defeat with a score of 74-68 and an end to their season.

The Blugolds fell behind in the start and throughout the game trailed the Warhawks trying to pull ahead.

Towards the end of the first quarter, Jenni LaCroix, a senior point guard, scored the first points of the game for the blugolds, while still behind Whitewater.

LaCroix said that not making the conference championship game was disappointing but she is proud of the team for not giving up and fighting throughout the whole game.

“I think as a whole we never gave up which is something that is really important for any team,” LaCroix said. “I think the resiliency of this team has really stood out.”

At the start of the second half, the deficit was down to three points two minutes in. Not being able to pull ahead or tie, the final quarter started with the Warhawks ahead 49-43.

Brooke Harris, a second-year forward, said her coach was a source of motivation reminding the team of what they are good at and that contributed to push the team to perform better.

“Our coach reminded us a lot that our strength was kind of incomparable to a lot of other teams in our conference and I think that really motivated us,” Harris said.

With four minutes left in the game, the Warhawks led 58-56. After three free throws from a fouled three-point attempt and a made three-pointer on the next position, the Warhawks took control.

The Blugolds couldn’t come back from that and lost their chance to play in the Wisconsin Intercollegiate Athletic Conference (WIAC) tournament championship.

Although the season ended in defeat, the women’s basketball team had victories along the way.

Sarah Huebner, a junior forward, said the UW-Stevens Point game at home earlier in the season was an exciting win for the Blugolds.

“It came down to the wire and was a game we were able to grind out,” Huebner said. “We did what we had to do to finish the game and I just think back to how close the game was and how hard we had to work.”

LaCroix said the win against Oshkosh at home during this season was another big win and a statement to how much the team had grown and matured.

“I think we definitely know how to handle different situations on the court better and close out games.”

The end of the season may be disappointing with the loss, but for LaCroix, she said that seeing the team fight for the chance to be conference tournament champions was something she was happy to see.

“No matter what the score is our team is always ready to fight back and continue to work hard to try and win the game which is a really great attitude to have,” LaCroix said.