Budding softball prepares to head to Rochester to start the season 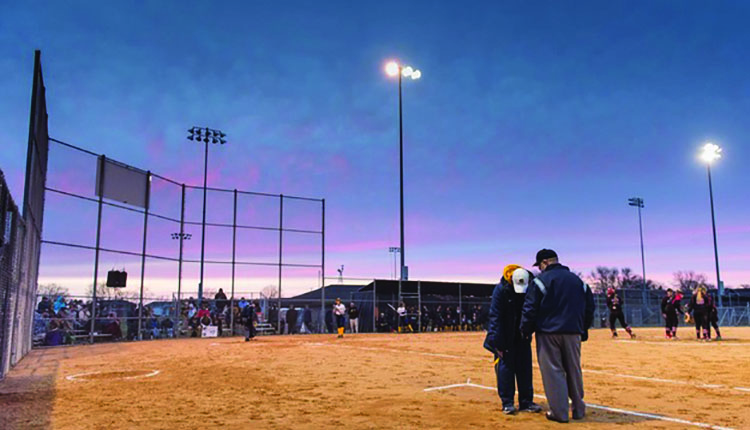 The Blugolds will have a different look this season as they will be led by two seniors after losing seven to graduation last year.

The snow still covers the grass — the bases are locked away in the shed and the bleachers are empty — but two-star athlete, Carlie Christensen, senior, and her fellow softball teammates are hard at work inside McPhee gymnasium preparing for their upcoming season.

They have been practicing for weeks even though their first game isn’t until Feb. 24 against Nebraska Wesleyan in Rochester, Minn.

Head Coach Leslie Huntington said she knows the first weekend will be a test right away for the youthful team. St. Catherine University from Minnesota is ranked eighth  by the National Fastpitch Coaches Association, their highest ranking in program history.

“We want to be as prepared as possible,” Huntington said. “St. Catherine is a top ten team right now, so we will be playing some real good competition, it will give us a good opportunity to measure where we are right away.”

The first four games are just as important as the last four games, Huntington said. They give them a good idea of what kind of team they will have before they head to Florida for the PFX Games in the middle of March.

With all the departures, this gives the young players a chance to prove themselves to the coaches and each other. With zero games under their belt, practices have had game-like atmospheres.

“This (the team’s youth) has made practices very competitive, there are so many spots to fill and we don’t who is going to fit in where yet,” Huntington said. “We have a lot of versatile players so there are many possibilities.”

With so many new faces on the team, Christensen and Darby Raffel, the team’s only two seniors, have taken on a leadership role to help guide the team.

“Its inevitable as seniors,” Christensen said. “We are the two people with the most experience, but we are not the only ones who can lead. There are leaders across this team.”

The Blugold softball team has been very close to postseason play the last few years, but have fallen just short. Christensen said she does not want that to happen again. This is her last shot at a championship and she doesn’t want her or anyone else to leave anything on the field.

“We have a lot of motivation to get to the playoffs, there is a lot of fire in us,” Christensen said. “We have come so close  the last few years, so we have to come in and leave everything out here.”

Christensen is not only a captain for the softball team but also the goalie for the women’s hockey team. Playing in both sports allows her to take aspects from each and apply it to the other, Christensen said. The biggest part is the mental toll it takes on her, Christensen said — going from hockey practice in the morning, to classes during the day, then to softball practice in the afternoon — but she said she has enjoyed every second of it.

Christensen said she and the rest of the team continue to perfect their game everyday in practice in preparation for their first game in a few weeks. Even with a young team, they are out to prove they are still as dangerous as last year.