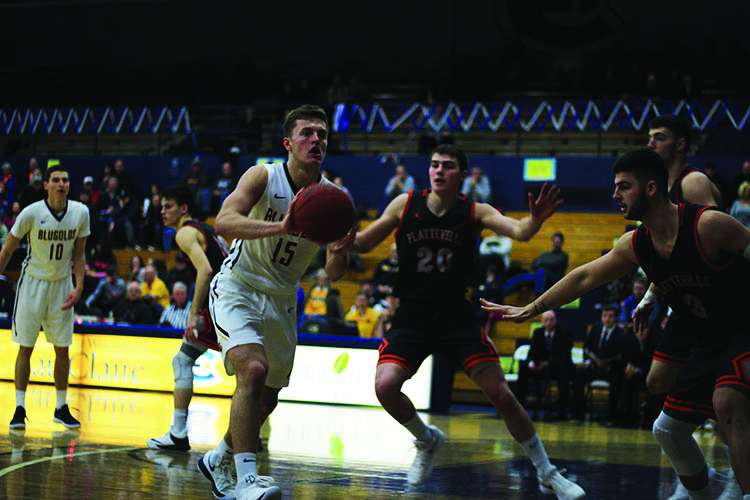 Diekelman finishes his career as the 11th all-time scorer in Eau Claire history while Duff finishes fifth all-time in three-point field goals made.

Four years ago, George Diekelman and Chris Duff were the only two first-year players to join a UW-Eau Claire basketball team that had gone 44-56 in the four years prior to their arrival. In the spring, however, they will graduate with game statistics that accurately showcase their talents as two of the best Blugold basketball players to ever play in Zorn Arena.

Not heavily recruited out of high school, Diekelman, a senior guard, and Duff, a senior forward, said they both chose Eau Claire for similar reasons: the size of the school, high competition in the Wisconsin Intercollegiate Athletic Conference (WIAC) and it being the perfect fit, both athletically and academically.

Diekelman said he was overshadowed at Stevens Point Area High School (SPASH) by future Division I talent (Sam Hauser, Marquette and Trevor Anderson, UW-Madison) that forced him to take a back seat, both on the court and with recruiting. Although Diekelman said he wasn’t the go-to at SPASH, he would assume that role on the court for the Blugolds long before the senior night game against UW-Stevens Point two weeks ago.

“Having the ball in George’s hands is the best thing for us,” Duff said.

With the game and a WIAC tournament berth hanging in the balance, Diekelman did what he does best: score. Down 54-53 against his hometown team and conference-leading Stevens Point, Diekelman shook a defender and drove the lane for a layup to put the Blugolds up with 7.8 seconds remaining.

“Coach had a good play call having me inbound the ball,” Diekelman said. “It was drawn up for me to drive the lane, Chris set a stagger screen in case I got stopped so I could pass it to him. Luckily, I kind of shook the defender after I got the ball and then saw an open lane and took advantage of it.”

The Blugolds needed a UW-Whitewater win to earn the sixth and final spot in the WIAC tournament but UW-Lacrosse’s victory over the Warhawks ended Eau Claire’s season short. Diekelman finished with 13 points while Duff added 14 points and seven rebounds in their last game in the Blugold uniform. The duo combined to score the first 17 points of the game for Eau Claire, a familiar sight for Blugold hoops fans.

Diekelman will go down as one of the most prolific scorers in Blugold history, finishing as the 11th all-time scorer in Eau Claire history. Duff, a three-point specialist and perimeter threat, finishes fifth all-time in three-point field goals made with 139 in 82 games.

The dynamic of Diekelman’s ball-handling skills and scoring percentage, coupled with Duff’s quick release and impressive range resulted in a strong duo. Their skill sets have provided complements for each other, something that has helped each of them be better players on the court, Diekelman said.

“When you play with a shooter like Chris, it’s just so easy,” Diekelman said. “All you have to do is get in the lane and just try to find him. It’s just been really fun playing with a guy like that.”

The second leading scorer in the conference this season at 16.2 points per game, Diekelman attracts most of the attention from opposing defenses. Averaging almost three assists a game, good for fourth in the WIAC, Diekelman also has no problem sharing the ball and finding his teammates, Duff said.

“It’s nice playing with someone who draws so much attention,” Duff said. “Everyone is keying in on him so every time my defender falls asleep, I can just get to an open spot and shoot it. He’s complemented my game completely.”

While Diekelman and Duff will go down as two of best players in Eau Claire history statistically, they said they are more concerned with being associated with the revival of Blugold basketball. After two straight 10-15 seasons before the duo’s first year on the court, the basketball program was struggling and carrying the burden of a rich history.

Diekelman said one of his fondest memories at Eau Claire was a home WIAC tournament game against Stevens Point in his second year on the team.

“That’s when we saw that we kind of revived the program a little bit,” Diekelman said. “Hosting a playoff game with a ton of people there and we played really well. We all were very young and very excited.”

The momentum of that game would carry into the following season where the Blugolds finished 18-8 in the duo’s junior campaign, Eau Claire’s best record since the 1999-2000 season.

Head Coach Matt Siverling says it’s no coincidence the basketball program was able to achieve a level of success while Diekelman and Duff were members of the team.

“They were not only great basketball players but also the type of people you want representing your program,” Siverling said.

Overall, Duff says the “you get out what you put in” mantra has helped him and his teammates bring life back to Blugold basketball.

Moving forward, Duff said, “I think the program is headed in the right direction, for sure.”