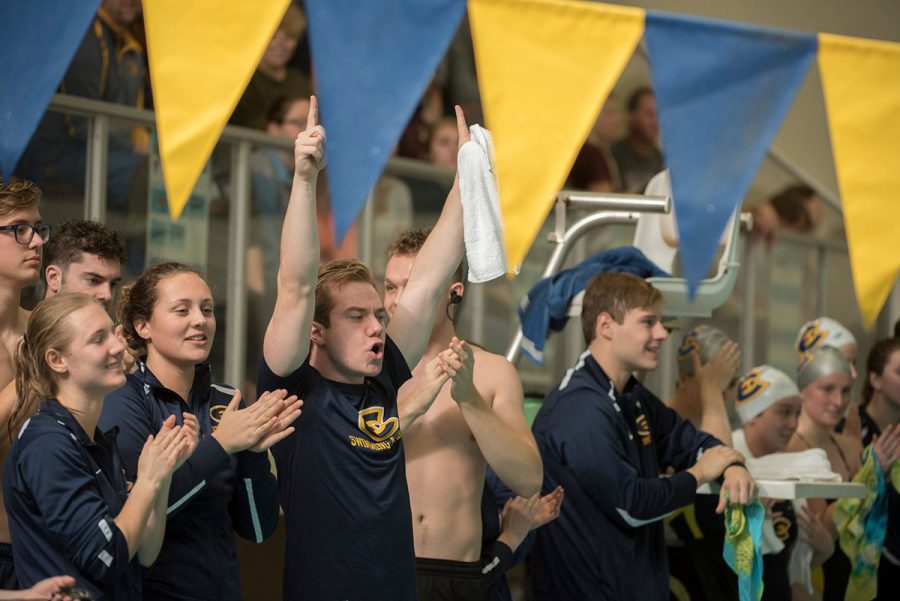 Blugold swimming and diving lost to St. Thomas last Friday, but beat Whitewater the next day in their last meet before the WIAC championships.

Blugold Swimming and Diving competed in two meets last weekend, suffering a loss at home against the St. Thomas Tommies on Friday, but defeating the UW-Whitewater Warhawks on Saturday.

Nick Hora, the assistant coach for the Blugolds, said that while Eau Claire lost to St. Thomas, it was exciting to celebrate seniors at their last home meet, and the team came out with a lot of energy.

“I think we definitely could have done better,” Hora said. “It wasn’t our best performance. Going into the next day we knew it was great to have another chance.”

Miller, Jack Kelly; a senior, Caleb Odmark; a junior, and Logan Coert; a senior captain, won the 200-yard freestyle relay with a time of 1:26.37. Meanwhile, Dylan Glumac-Berberich, a sophomore, won the 1-meter dive with a score of 290.65.

Hora said the team’s win against Whitewater the day after losing to St. Thomas was one the team took a lot of confidence from.

“It was probably our best complete team effort of the season,” Hora said.

“When it comes down to those meets, every point matters,” Short said.

Logan Coert, a senior captain, said the performances of those team members who tapered and won’t be competing in the upcoming Wisconsin Intercollegiate Athletic Conference (WIAC) championship meet were “outstanding” on both the men’s and women’s sides.

“The taper group actually ended up leading the team compared to the non-taper group,” Coert said. “Everyone on the team is just so proud of their accomplishments and everything they’ve achieved this season. It doesn’t matter who you are, everyone is valuable.”

Short said first-years were also key members in defeating Whitewater, and mentioned Emily Ries, a first-year who got a three-second best time in the final event of the meet, the 400-yard freestyle relay. Without Reis’ standout performance, Short said, the women may not have beaten the Warhawks.

The relay team, which comprised Short, Jessica Wilson; a first-year, Brittany Farr; a junior, and Ries, took first with a time of 3:48.81.

Both the men’s and women’s team have begun to taper leading up to the WIAC championships, which will be Feb 15-17 in Brown Deer.

Short said that because a lot of competitors got season-best times in the meet against Whitewater, the team is excited for what is to come at the championships.

“If we could do that well when we’re exhausted, what can we do when we get a little bit of rest?” she said.