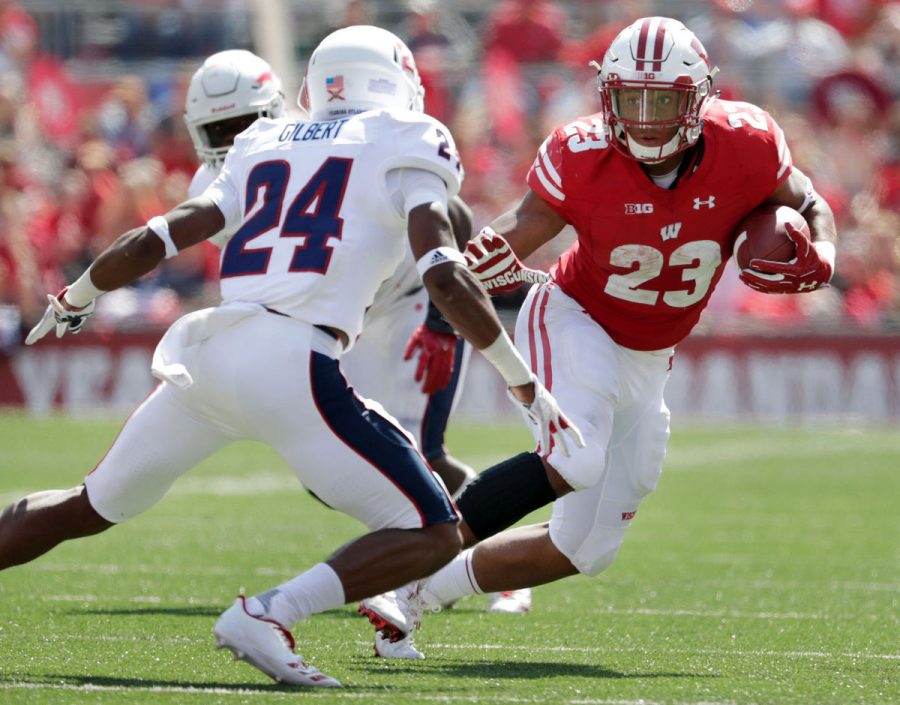 Wisconsin Running Back Jonathan Taylor rushed for nearly 2,000 yards as a first-year competitor.

The UW-Madison Badgers football team has had the most successful season in school history.

The Badgers have been playing for over 100 years but have never had an undefeated regular season until this year. They finished the regular season 12-0 after finishing 11-3 last year, according to the Wisconsin Badgers website.

Despite the hype surrounding the team, however, the Badgers took a difficult loss this past Saturday against the Ohio State University (OSU) Buckeyes in the Big Ten Championship, falling 27-21. Nevertheless, UW-Eau Claire students and Badgers fans alike are still proud of the team’s success this season.

One such person is Sam Phillips, a sociology student at Eau Claire. He said he was happy with how the Badgers played this year but questioned their competition level leading up to the Big Ten Championship.

“I am proud of the Badgers this season; I was impressed with their defense,” Phillips said, “but they didn’t play a lot of strong teams.”

The Badgers advanced to the Big Ten Championship for the third time in four years, according to the Big Ten, playing OSU for the second time in the four years. Back in 2014, the Badgers didn’t fare so well, losing a lopsided game 59-0.

This year the game was closer, but the Badgers still ended up with a loss. The score indicated it was an even matchup throughout the game, with the Badgers only losing by six, but the Buckeyes were able to dominate the Badgers’ number No. 1-ranked defense throughout the course of the game. The only blemish the Buckeyes’ offense had was a first-quarter interception thrown by J.T. Barrett, OSU’s senior quarterback, which was returned by the Badgers for a touchdown.

OSU was able to rush for more than 200 yards, the first time the Badgers had given up over 200 yards this year, according to ESPN. J.K. Dobbins, an OSU first-year running back, totaled 174 yards on 17 carries (7.4). The Badgers were able to contain Barrett and his passing, but OSU was able to dominate the trenches the entire game.

The Badgers’ offense did not have the same success as OSU did. Jonathan Taylor, a first-year competitor for the Badgers who has been one of the best running backs in the nation all year, was contained all afternoon and was unable to reach the century mark for the first time this season.

Jon Fortier, a history student at Eau Claire, said he was satisfied with how the game was played, even though the Badgers lost.

“I was happy to see that it was a close game — it kept people interested to the end,” Fortier said. “I think … it’s the newest Big Ten rivalry that has been shaping over the last ten years.”

The Badgers will try and recoup from the Big Ten Championship and prepare for the bowl season. They will face off against the No. 10 Miami Hurricanes in the Capital One Orange Bowl on Dec. 30.