Skating off the ice with a victory

UW-Eau Claire women's hockey continued their season with another win 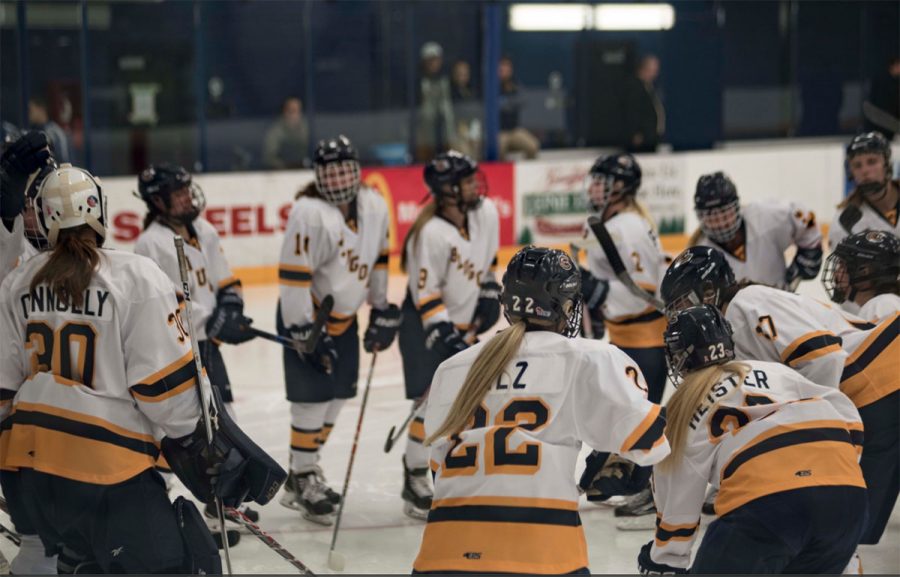 UW-Eau Claire women's hockey tied St. Norbert College on Friday 1-1, and skated past Marian on Saturday in a score of 1-0.

After the UW-Eau Claire women’s hockey team (6-3-2) end up tying St. Norbert College 1-1 on Friday, the Blugolds continued their strong start to the season with a 1-0 victory over Marian on Saturday.

The Blugolds traveled to St. Norbert Friday night hoping to rebound after suffering only their second loss of the season to Hamline University on Tuesday night.

Eau Claire was able to outshoot the Green Knights 30-18 but not outscore them, as they were unable to take advantage of power plays, going 0 for 7 in the game.

Coach Erik Strand said he preaches the importance of power play goals, as those can shift the momentum of the game in the team’s favor.

“Those are moments you have to capitalize on; they give you a chance to take momentum back,” Strand said. “We have been getting good looks the last few games but haven’t been able to finish.”

Morgan Zirbel, defensemen and first-year competitor, scored her third goal of the season in the second period to tie the game at 1-1 shortly after St. Norbert capitalized on a power play opportunity, taking the lead 1-0.

Even though Blugold offense wasn’t scoring, the defense stayed strong and limited the Golden Knights’ opportunity to score.

Both teams went scoreless in the third period, which extended the game to overtime, where the score stayed the same and concluded in the second tie for the Blugolds this season.

The Blugolds continued their road trip with a visit to Marian University. Eau Claire faced another tough opponent in the Sabers but were able to dominate defensively, not allowing the other team to score and holding them to only 16 shots.

Holly Turnbull, a junior defensemen, scored her sixth goal of the season on a power play in the first period. The Blugolds would only get one goal on the game, but the offense had plenty of opportunities; they totaled 36 shots ⸺ the seventh time they have done that this year.

Strand said he was happy with how the offense performed during the weekend, despite the fact they only scored two goals. He said he praised the goalies from St. Norbert and Marian.

“The opposing goalies played incredible. They made great saves against our offense. They played tremendous defense,” Strand said.

Erin Connolly, a sophomore goalie for the Blugolds, also performed well,  Strand said. Only allowing one goal all weekend is extremely commendable, he said, and her ability to stay focused throughout the entire game is vital.

“The defense played, they kept shots to the outside, our goalie (Connolly) had incredible saves,” Strand said. “We only allowed 16 shots. That is hard for her to stay focused; the body gets cold, but she stayed with it.”

The second half of the season will spell some relief for Eau Claire as they will have nine home games.

Strand said he knows the beginning of the season was tough for the ladies but he is encouraged by how they have responded.

“Where we are at right now, I’m happy. I’m optimistic about future. We have seen some of the best teams in the West so far,” Strand said. “It is encouraging to have done as well as we have on the road so far.”

The Blugolds will finish up the first half of the season this weekend against St. Catherine University of Minnesota.