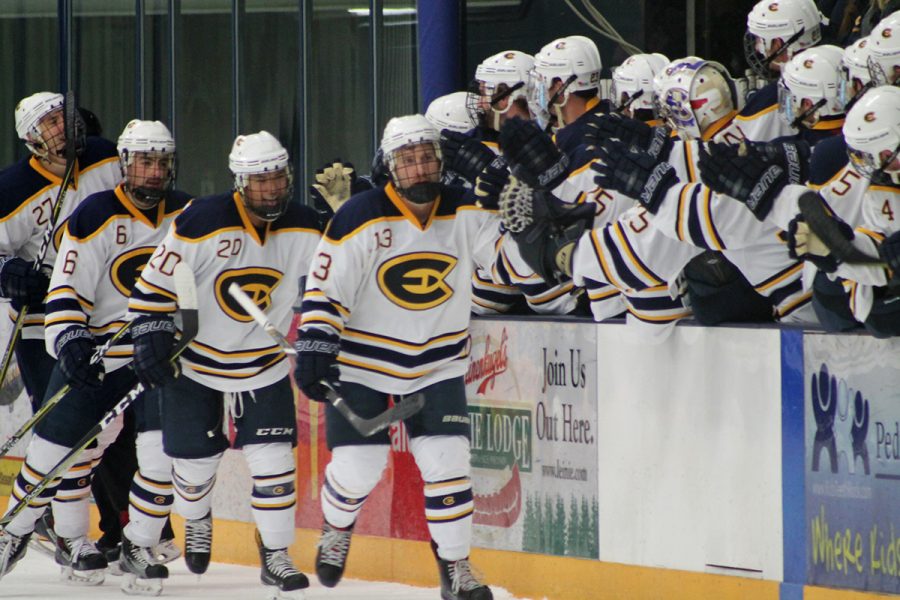 The Blugolds played on Saturday night, alumni night, against UW-River Falls where they won 4-0.

Following a disappointing loss on the road in Menomonie on Wednesday to open conference play, the Blugolds earned their first Wisconsin Intercollegiate Athletic Conference (WIAC) win of the season behind a strong showing in the net by David Johnson, a sophomore goaltender.

“Having it be a WIAC conference game is a big step for our team in developing as the season goes on,” Hopfner said. “I think we were able to get good shots on net with people in front, which is something we always try to do because it causes problems for the opposing goalie. We also ran our systems very well for most of the game and if we continue to run them as we did on this game we will be a tough team to beat.”

The Blugolds found the back of the net first following a River Falls turnover in their own end. Jake Bresser, a sophomore forward, found himself alone following the turnover and beat the Falcon goalie short side, making the score 1-0 not even two minutes into the game. Jacob Wolter, a senior forward, earned the assist on Bresser’s fifth goal of the season.

Eau Claire had a few more high-quality scoring chances before the end of the period, but the score remained 1-0 after the first frame with the Blugolds leading 13-8 in shots on goal.

The Falcons obtained a penalty late in the second period, which led to a power play goal right off the faceoff scored by Scott Munro, a sophomore defensemen. Hopfner was credited with the assist.

Eau Claire added a third goal just over six minutes into the third period on a feed from Hopfner to Jesse Tredinnick, a senior forward, who beat the Falcons’ goalie to make the score 3-0.

The Blugolds added one more goal on a shot by the point that was deflected past River Falls’ goalie by Wolter to send it to the final score of 4-0. Logan Von Ruden, a sophomore defensemen, and Adam Parsells, a first-year defensemen, gave the assists on Wolter’s first goal of the season.

Von Ruden said he always makes it his personal goal to play within himself, play good defense and play physical.

“In Saturday’s game I think I accomplished all of that,” Von Ruden said. “I was also able to get some shots on net, which was nice. There were obviously moments where I made mistakes, but that’s hockey, and my team was there to back me up. Overall it was a great team win and that’s the most important thing.”

Johnson got his second start of the year and saved all 21 shots he saw on the night to improve 2-0. The sophomore’s save percentage now sits at .981, and his goals totaled an average at .037 in limited playing time.

Hopfner said the team could always improve on their consistency, and if they can be consistent with their systems, they will be a tough team to beat.

“I think that with us having a good amount of younger guys on our team, leadership is something that can play a big part in our success,” Hopfner said. “Luckily, we have some solid leaders in our upperclassmen, and I think that is something as a whole we did well and will continue to do so.”

The Blugolds (8-4-0, 1-1-0) will now have a few days off before heading on the road for a rare Tuesday night game against Northland College in Ashland.