The Blugolds held the Lions to limited goals over the weekend 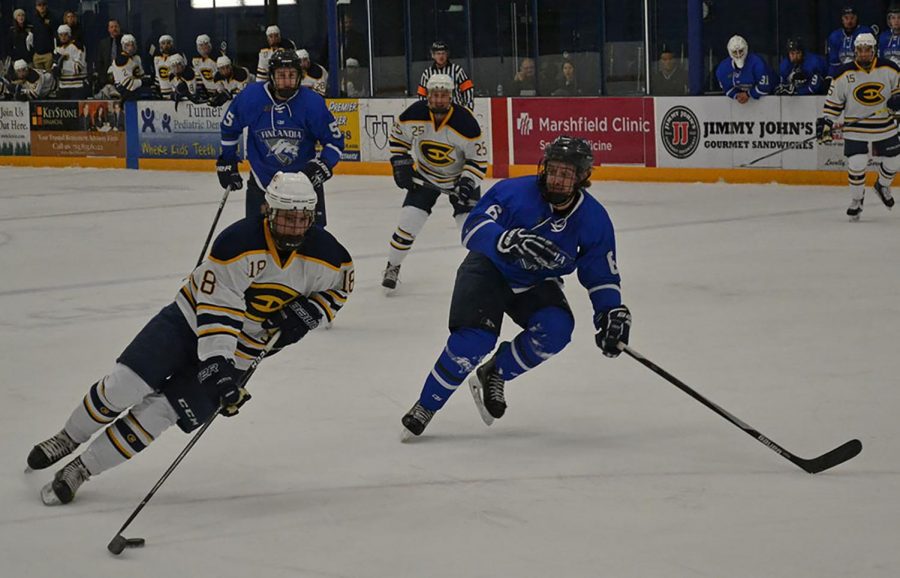 The UW-Eau Claire men’s hockey team skated to victory at home over the weekend where they defeated Finlandia University (Michigan) both Saturday and Sunday with finishing scores of 5-1 and 4-1, respectively.

The No. 14 Eau Claire hockey team defeated the Finlandia Lions 5-1 on Saturday night at Hobbs Ice Arena, improving their overall season record to 6-3.

The Blugolds nearly found themselves outside the national rankings following the tough loss against No. 1 St. Norbert last weekend, but came back strong on Saturday, firing a season-high 57 total shots on goal.

The Lions scored the first goal with 11:38 left in the first period. However, Johnny Mueller, a junior defenseman, responded with his first goal of the season just over five minutes later to make the score 1-1, assisted by Jake Hopfner, a senior forward, and Alex Strand, a sophomore forward.

“I think the games went well this weekend; with two wins it is hard to be disappointed with them,” Hopfner said. “Our effort was pretty solid overall, and we got a few new guys into the lineup, and they contributed, which is always a good thing to have.”

Eau Claire added another goal, scored by Strand, with under three minutes left in the period, making the score 2-1. Hopfner and Jesse Tredinnick, a senior forward, were credited with the assists on Strand’s fourth goal of the season.

The Blugolds held a dominant 18-5 lead in shots on goal after the first frame.

Mac Jansen, a senior forward; Lucas Kohls, a junior forward; and Scott Munro, a sophomore defenseman, added three more points for the Blugolds in the final two periods as they went on to win 5-1.

Murno finished with a goal and an assist and also totaled an impressive +4 rating in the ninth game of his Blugold career.

David Johnson, a sophomore goaltender, made his first ever start in the net as a Blugold, saving 18 of the 19 shots fired at him throughout the night. Johnson saw action just one game last season before Saturday night.

Hopfner said there is always room for improvement on the ice.

“Very rarely, if ever, do you play a complete or perfect game,” Hopfner said. “One area we have been working on and continue to get better with would be the turnovers in the danger areas, such as in our own zone.”

He said as a team, Eau Claire also needs to work on scoring their goals. They had some goal-scoring opportunities over the weekend, but there were many opportunities that should have touched the back of the net, Hopfner said.

Eau Claire returned to familiar ice as they took on Finlandia University for a second night in a row at Hobbs Ice Arena Sunday night where they earned the win 4-1.

After winning in dominant fashion over the Finlandia Lions the night before, the Blugolds returned to business, controlling the puck for most of the night and finishing with 60 total shots on goal.

It looked like it was going to be a scoreless first period until Colton Wolter, a senior forward, started the game with his second goal of the season with less than two minutes left. The power-play goal was assisted by Adam Parsells, a first-year defenseman and Mueller.

Eau Claire held a dominant 21-8 lead in shots on goal after one period of play. Things then became physical in the second period, where there were a total of nine penalties called, including a game misconduct call from a Finlandia player.

Kyle Lee, a senior forward, extended his point streak to three games with his second goal of the season nearly halfway through the period to make the score 2-1. Kohls and Munro continued their strong weekend, earning the two assists on goal.

Wolter added his second goal of the game to make it 3-0 with 4:48 left in the second period, assisted by Nathan Dingmann, a first-year forward.

Despite not being able to take advantage of the multiple power play opportunities, the Blugolds took the 3-0 lead into the second intermission, leading 451-13 in the shots on goal.

Braxton Collins, a first-year forward, skated to success in his second game as a Blugold and found the back of the net to update the score 4-0 unassisted just over five minutes into the final period.

Camden Haugenoe, a first-year goaltender, returned to the crease for the Blugolds after taking the previous night off. He saved 14 of the 15 shots he faced on the night to improve 6-3.

“I think we have a good team that works hard,” Kohls said. “We have high expectations every year. We would like to keep growing as a team and build toward a national tournament bid.  Winning the WIAC is a goal of ours, which starts this week.”

The Blugolds (7-3-0) will look to use this three-game winning streak to propel them into WIAC play. Eau Claire will play rival UW-Stout at 7 p.m. on Wednesday in Menomonie.