Blugolds dominated by No. 3 Titans 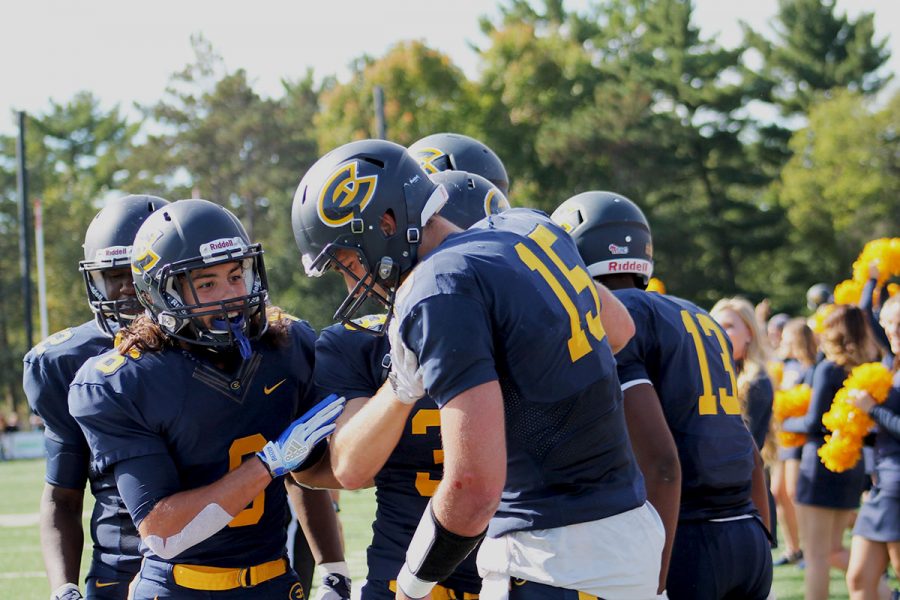 UW-Eau Claire football suffered a difficult loss to the UW-Oshkosh Titans this past weekend with a final score of 42-7.

The UW-Eau Claire football team had one of its toughest challenges of the season this past Saturday on the road against the undefeated, No. 3 nationally ranked UW-Oshkosh Titans, suffering a loss at 42-7.

The Blugolds’ offense started hot, and they scored on their first drive of the game. J.T. DenHartog, a junior quarterback, hooked up with Leeshaun Evans, a junior wide receiver, for a six-yard touchdown pass.

It was an encouraging start to the game, DenHartog said, but the offense didn’t run as smoothly for the rest of the game.

“The first drive we finished, we executed our plays like we were supposed to,” DenHartog said.  “The other drives, we did some good things and then shot ourselves in the foot with stupid mistakes.”

The Blugolds knew coming into this game they would be facing a tough opponent, but it didn’t change their mentality or preparation for the game, head coach Dan Larson said.

“The preparation never really changes week to week,” Larson said. “We have played many tough teams. We have to play a certain way to win. We must keep our mistakes to a minimum. That is our mentality. The jersey and the ranking doesn’t mean anything to us.”

DenHartog said every matchup presents its own challenges.

“Every week it’s the same, no matter who we play, everyone in this league is good,” DenHartog said. “It doesn’t matter if they are third or not ranked at all, every team is tough.”

This week’s upcoming game will be a special one for the seniors, as this will be the last game of their college careers, Larson said.

“There are 12 seniors playing their last game on Saturday,” Larson said. “Throughout the week of practice, we will acknowledge them. We want this last week and last game to be a memorable one for each and every one of them.”

The season has had its difficulties and successes, and the record hasn’t reflected the growth of the team, Larson said, but he’s proud of the progress the team has made.

“Record doesn’t show to what we can turn our program around,” Larson said. “Our program is becoming more competitive and is turning around. I have been encouraged by our program. To win, we must learn from our mistakes. “

Larson said he knows building a winning program takes time, a culture of consistency and success.

“We are building a culture, building a program,” Larson said. “Teach success, the only way is consistency. We haven’t had a lot of success the last few years, but it’s going to change.”

The Blugolds finish the season up this Saturday on the road against UW-Whitewater.