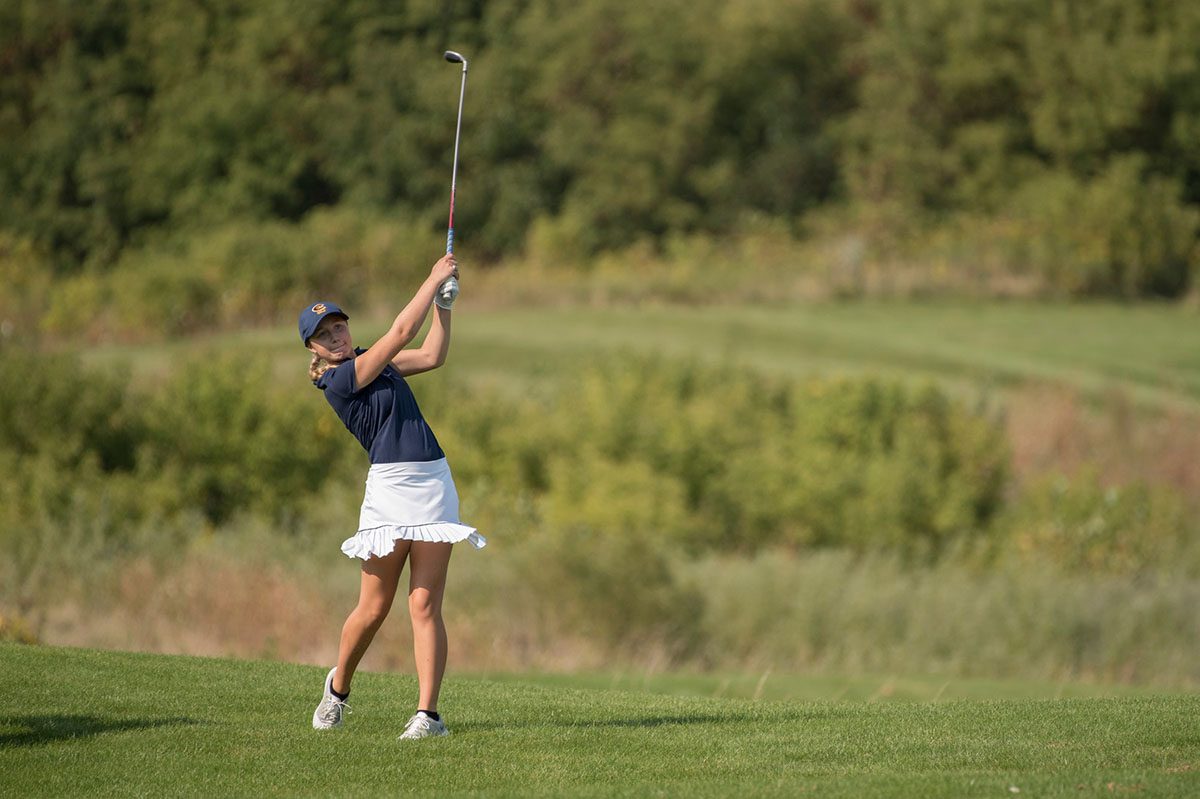 The UW-Eau Claire women’s golf team competes in the Mad Dawg Invite at the Stevens Point Country Club over the weekend where they finished fifth.

The UW-Eau Claire women’s golf team placed fifth overall at the Mad Dawg Invite in Stevens Point over the weekend. The invitational consisted of 13 different teams with a total of 73 golfers competing.

After round one of play on Saturday at the Stevens Point Country Club, the Blugolds finished in fourth place with a team score of 338 points, falling one point short to UW-Whitewater and UW-Oshkosh, who tied for second with a score of 337.

Chomniak and Stolen led the way, booth shooting an 82. The two Blugolds were tied for eighth place overall.

Stolen said she thinks her ball striking was decent, but her putting was the worst it’s ever been.

“We averaged over 39 putts as a team which is over seven more than it really should be,” Stolen said. “Myself individually, I should’ve had over 12 less putts, which would’ve put me right up near the top of the field.”

Rudnicki said the team needs to practice their putting.

“Lag putting is a definite factor that needs to be worked on this week in order to reduce the amount of three putts the team and I have,” Rudnicki said.

The Blugolds entered round two of the invitational on Sunday, where they ultimately finished fifth and tallied a team score of 344 to finish the weekend with a team total of 682.

Viterbo University switched places with Eau Claire as they pushed one spot ahead and took fourth overall with a total score of 674.

“Overall, I am proud to be improving on my individual tournament scores,” Rudnicki said. “My latest scores have contributed to the team allowing us to do better in these tournaments. As a team we performed well but have lots of room for improvement.”

Glaeser trimmed two strokes to move into a tie for 34th place with an 89, totaling her score to 180 for the weekend.

Head Coach Mike Greer said the WIAC (Wisconsin Intercollegiate Athletic Conference) is very strong this year, and Stout, Whitewater and Oshkosh will be the Eau Claire’s biggest competition next weekend.

“We need to bring a stronger mental game and find a way to hole some more putts this weekend,” Greer said. “Poor putting is what held the team back from a better finish. We have a solid practice plan in place this week to improve going into the WIAC Championship this weekend.”

Next up for the Blugolds is the Wisconsin Intercollegiate Athletic Conference (WIAC) Championship Oct. 6-8 at the Reedsburg Country Club.