The Blugolds will return to competition in February 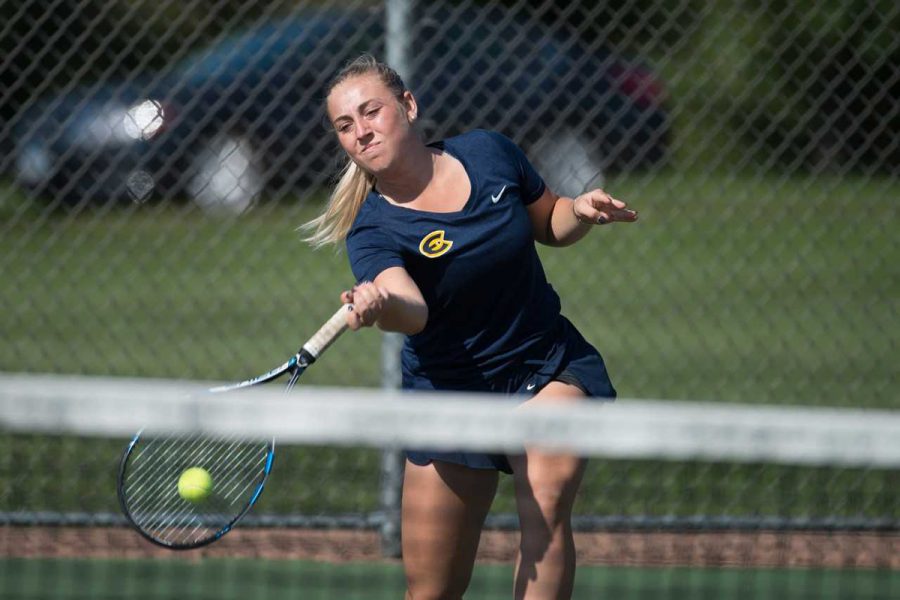 Kendra Berry, a UW-Eau Claire sophomore beat her competitors in the WIAC Championship and progressed to the finals.

The Blugold women’s tennis team wrapped up its season this past Sunday after placing third with 16 points in the Wisconsin Intercollegiate Athletic Conference (WIAC) Championship in Madison.

UW-Eau Claire’s Kendra Berry, a junior, beat UW-Whitewater’s Julie Martin 7-6 (6), 6-2 in the No. 4 singles championship. In the second round, Berry defeated Samantha Koppa from UW-Oshkosh 6-3 and 6-1 to move on to the finals.

Natalie Wijesinghe, a Blugold sophomore, took the win over UW-Stout’s Linsey Thisius 6-2, 6-1 in No. 1 singles, but lost in the second round to Whitewater’s Alexandra Talyansky. Wijesinghe ended the day with a 6-3, 6-1 victory in the third place match.

Sarah Henderson, a senior, won 6-1, 6-0 over Katie Kreibich from Stout, lost to Whitewater’s Bridgid McGuire and ended with a 6-1, 6-2 win over Oshkosh’s Alyssa Leffler. Henderson also landed a spot on the All-Sportsmanship Team.

Winning the first match for the No. 5 singles tournament was Emily Cooper, a first-year competitor, who beat Karli Helland from UW-River Falls 6-1, 6-3. She was unsuccessful in the second match, losing to Alaina Bublitz from UW-La Crosse 6-4, 4-6, 6-4. Cooper confirmed her third place position when she won against Lesley Kutnink from Oshkosh.

The last Blugold to follow this trend was Hanna Zevenbergen, a sophomore in the No. 6 singles tournament. She defeated Kelley Hodyl from Oshkosh in the first round, lost to the two seed in her second match and won against Stout’s Kennedy Kleist for third place 6-1, 6-0.

Molly Stewart, a junior and team captain, was the tournament’s two seed for No. 3 singles. She defeated Krista Haglund from River Falls 6-0, 6-0. She also found herself victorious in her second match, 6-3, 6-0, against La Crosse’s Sadie Spahn. This allowed her into the championship match, where she lost 6-3, 6-3 against the one seed from Whitewater, Jillian Wallace.

While he said the team did fine, Head Coach Tom Gillman said several factors from the championship impacted the team’s performance, including the fact that his No. 1 singles player, Wijesinghe, was sick. Others included the seeding of the matches and missed opportunities in close matches.

Gillman said standout performances from the weekend came from Berry and Stewart.

“Molly Stewart was very good,” Gillman said. “She’s shown a lot of improvement this year. She’s grown as a leader, she’s grown as a player. Last year when she was in the finals of her event … she really wasn’t in the final competitively. This year she was right there … She didn’t have one match that was not competitive.”

Stewart said this newfound competitiveness comes from the chance to be a leader on the team. That opportunity has led to increased confidence on and off the court, she said.

Gillman said the team will continue to step up its game and get set up for not only the spring season, but for next year as well. Having younger players who can step into leadership roles always helps, he said. He also said the team is working to get closer and closer to winning the conference and heading to Nationals, but he said he was happy with the team’s performance this season.

“Our conference is really strong, and I think we achieved a lot of things,” Gillman said. “We were tough to beat all fall.”

Stewart said she’s looking forward to next season as well.

“I’m just really proud of this team,” Stewart said. “We had a good showing this season, and I’m just really excited to see what we can bring in the springtime.”

The top four teams from the WIAC Championship will play in a team tournament in the spring to decide the conference’s automatic qualifier at the NCAA Division III championship.